"Cancer is a word, not a sentence." -- John Diamond, British journalist

New Democrat leader Jack Layton's surprise disclosure Monday that he is suffering from a new form of cancer will shock not only his party, but federal politics itself.

As someone who has known Layton since his days as a Toronto city councillor in the 1980s, and who endorsed Layton's 2003 NDP leadership bid, I'm saddened to learn of his new illness but inspired by his fighting spirit.

Canadians' kindness will support Layton's efforts to overcome cancer once again, as he did successfully with prostate cancer. We can only hope that Layton's determination to beat the disease is successful.

But his plans to return to Parliament when it resumes September 19 seem overly optimistic, given his frail, gaunt appearance and hoarse, almost unrecognizable voice.

That could mean a significant shift in the dynamic of federal politics, because as leader of the official Opposition, Layton is also the alternative to Prime Minister Stephen Harper.

While with a federal election just behind us and a majority Conservative government firmly in power for four years means that political stability is guaranteed for now, the future of the NDP is very much in the balance.

Layton attempted to deal with the first question for the NDP -- who will be interim leader until he returns -- but his answer is somewhat puzzling: rookie Member of Parliament Nycole Turmel.

Turmel has only been an MP for Hull-Alymer riding in Quebec since the May 2 election.

While she was chosen unanimously as caucus chair and is an experienced former president of the Public Service Alliance of Canada, Layton's choice of Turmel could be debated and even overturned.

Putting an MP with under a month's parliamentary experience in charge of the official Opposition is almost unheard of.

But the party passing over both deputy NDP leaders -- Vancouver's Libby Davies and Montreal's Thomas Mulcair -- would be astonishing. 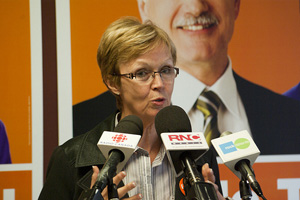 Interim NDP leader Nycole Turmel: experienced, but not as MP.

Either could easily handle the job for at least the time period Layton indicated.

But that choice isn't made by caucus. It will be a decision of the NDP's federal council -- its elected national executive -- on Thursday.

And despite the best wishes of all for Layton's recovery from cancer, thoughts will turn to the possibility of a full change of leadership in the near future.

Turmel's selection may be most of all an indication that Layton does not wish to put in place anyone who may have longer term leadership aspirations.

No MPs will want to talk about that in light of today's stunning news about Layton.

But inevitably, due consideration will have to be given to ensure that the federal NDP is prepared for all eventualities.

Meanwhile, we can only wish Layton the best in what is an extremely unfair blow to a leader who has been so successful for the party.