Anyone wanting to see just how dysfunctional politics in B.C. has become should check out Bob Simpson's recent Private Members' statement in the provincial legislature. 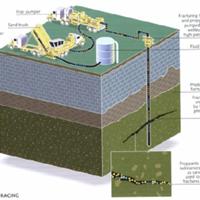 A Fracking Disaster in the Making: Report

For seven minutes Simpson, member of the legislative assembly for Cariboo North and one of two Independent MLAs, spoke about why he and fellow Independent Vicki Huntington (Delta South), had called on Premier Christy Clark to appoint a special committee of the Legislature to investigate B.C.'s ballooning unconventional gas production and its public policy implications.

It was an impressive performance, given the slightly more than seven minutes that Simpson had to marshal his arguments. You can watch it all here on a video clip. Look in particular for Simpson's characterization of B.C.'s rapidly expanding unconventional gas production as the Wild West of resource extraction, and how that comment may have unhinged his Liberal colleague from across the carpeted divide. But I digress.

Private members' statements are an opportunity made available to all MLAs and take place on Monday mornings when the legislature is in session (a rare event the past few years). Statements fall outside of normal government business and are meant to be non-partisan in nature. But just as there's the Wild West of resource extraction there's the Wild West of B.C. politics.

During his statement, Simpson touched on a wide array of controversies swirling around B.C.'s accelerating unconventional gas drilling as reasons why he and Huntington (along with a number of environmental organizations, First Nations, local citizens' groups in the energy-rich northeast corner of the province and others including the B.C. office of the Canadian Centre for Policy Alternatives) believed that convening a special legislative committee made good public policy sense:

The escalating volumes of water, sand and toxins being pressure-pumped underground during hydraulic fracturing or fracking operations, a stimulation technique now used to encourage maximum gas flows at about half of all natural gas wells drilled in British Columbia.

And who, if anyone, is tracking the cumulative impacts on land and water resources as B.C.'s unconventional gas resources are developed.

Reports from government funded bodies showing that gas produced from unconventional shale formations will result in so many greenhouse gas emissions that the province will be incapable of meeting its legislatively mandated GHG emissions reduction targets and, in fact, court increases in said emissions of 10 per cent or more.

"British Columbia has a long history of natural resource exploitation. The original founding of this province was fur, forests and fish. The neck of the woods I come from, was the gold rush. And if history dictates anything to us it states that we need to be much more careful in how we use our natural resources," Simpson said.

It was then that he suggested that the escalating development of B.C.'s unconventional gas resources might properly be called the new Wild West of resource exploitation, a phrase, he was at pains to point out that he had not coined, but that he and other fellow MLAs on the legislative finance committee had heard applied to the Peace region's natural gas plays on two separate occasions when the committee traveled there.

And then it was time for the Wild West's Liberal MLA, Pat Pimm, to present his, er, reasoned response. Here's some of what the MLA for Peace River North had to say. Believe me when I say it was not the first or last of his embarrassing utterances.

"Why has the member opposite all of a sudden decided to take an interest in worrying about the great folks of northeastern B.C.? I mean, I'm happy you are, but, uh, I think that's why we have 85 MLAs. And I think I can look after my needs in that neighbourhood quite well. I'd also like to ask the member opposite if he's going to be seeking election in northeastern B.C. next time around, or if he would be content to try and represent his own constituents in the Cariboo South, or Cariboo North, rather. And, ah, last time I checked they certainly could use a little help in that area. And I think he should be dedicating his time to their concerns instead of grandstanding in this House about the northeastern B.C."

It was then that Deputy Speaker Dawn Black reminded Pimm that his Get-out-of-Dodge rhetoric was inappropriate for the moment at hand and directed the MLA to address his comments to her, something that Pimm, flashing a saccharine smile, undertook to do but evidently had occasional trouble pulling off.

All and all, it was a shocking performance by one of Sheriff Clark's junior deputies. All the more so because as anyone familiar with unconventional gas developments knows, policies in jurisdictions such as Quebec and New York State are being driven by mounting public fears over the environmental, health and safety and economic damage caused by fracking operations in other Canadian provinces and U.S. states.

In both Quebec and New York, temporary moratoriums on unconventional gas developments were imposed, allowing time for provincial and state officials to investigate the links between fracking operations and potentially deadly gas leaks, explosions, contaminated drinking water wells and groundwater sources, and polluted streams and rivers.

As Simpson said, we can either develop natural resource policies here in B.C. in response to rising protests or our elected leaders can actually be proactive, examine the issues and shape or reshape provincial policies accordingly.

If Sheriff Clark has any sense, she'll lasso Simpson and Huntington and deputize them to be on a special task force to launch a preliminary investigation into the issues raised by the two Independent MLAs. In the meantime, she might want to send her junior deputy, Mr. Pimm, on a long horse ride out to the outer extremities of the range in his beloved northeast B.C.

Along the way, Pimm could water his steed at any one of the numerous pits dug into the earth and each filled with 10 or more Olympic swimming pool's worth of water. The pits were excavated by natural gas companies and then filled with water withdrawn from rivers, lakes and streams; water now destined for pressure-pumping deep underground at fracking operations. A word of warning, though. Avoid the nearby wastewater pits. Too much salt, sand and chemicals there for a horse's liking.