"I don't mind your dishonesty half as much as I mind your opinion of me -- you must think I'm stupid." -- Charlie Brown, as Lucy tries to persuade him to kick the football again. 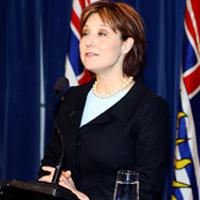 BC to Reduce HST, Send Some Families Cheques

Forget all the times we've broken our promises to you -- this time it will be different.

You have our word on it.

That's what the BC Liberal government is telling voters about the Harmonized Sales Tax.

Believe that they will introduce changes they pledged last week to bring in -- trying to buy your vote with your own money -- but only if you agree to keep the HST in the June binding referendum.

It's like cartoon character Charlie Brown running full speed to once again try kicking the football -- and having it pulled away as usual by his nemesis Lucy Van Pelt.

With the HST, Lucy's character is played perfectly by Premier Christy Clark. Big smile, sweet words: "This time you can trust me -- see, here's a signed document testifying that I promise not to pull it away."

British Columbians get to be Charlie Brown, the trusting soul who always gets tricked and ends up flat on his back yelling "Arrrgggh!" at his foolish mistake of believing Lucy once more.

That is, unless voters decide to not get fooled again.

Or unless they look at what a bad deal the HST changes really are.

The first part is simple.

Here's what Clark said on March 21 on Vancouver's CKYE Red FM 93.1 on why she would not cut the HST rate:

"We aren't going to be talking about trying to reduce it by a point or two before the referendum. I mean, I think people will see that as buying them with their own money," Clark said.

Now she's trying to buy us with our own money! She does think we're stupid.

And why give a $175 grant for every child under age 18 without any regard for the family income level?

But guess who qualifies for that $175 grant -- Premier Christy Clark and Finance Minister Kevin Falcon, who each have a child.

Second, can you believe a BC Liberal government that said it wouldn't introduce an HST, then did so after the election, will cut the HST in 2012 to 11 per cent?

Can you trust a government that swore the HST would be revenue neutral, then admitted it would raise an extra $820 million a year?

Who can have faith in desperate BC Liberals who said in March 2010 that every dollar from the HST would go to health care, when that's just not true.

Why would you believe a government that promised a 15 per cent income tax cut for all British Columbians last October to convince us to support the HST and then rescinded the tax cut just weeks later?

On the HST changes themselves, most British Columbians will still pay more even if the BC Liberals actually do cut the rate to 11 per cent.

That's because you will still pay an extra six per cent on hundreds of goods and services.

In three years if the rate is cut to 10 per cent you will still pay five per cent more on all these things than you did back in June 2009.

Is it any wonder the BC Liberal government is trying to buy your vote with a multi-million dollar ad campaign?

Or that big business is spending millions to keep the massive tax shift that makes consumers pay more and corporations pay less?

Trust us. Kick the HST football.

What could go wrong?