And the big winner last night… Preston Manning. When Preston created the Reform Party in a Vancouver hotel in 1987, he set out to remake Canada, and to challenge a Progressive Conservative party he felt was more progressive than conservative. But even though he crafted Reform's commandments, like Moses he was never going to be able to enter the Promised Land. Last night Stephen Harper led Manning's baby into the world of milk and honey or, since we're talking about Alberta here, oil and money -- an unrestrained majority government that owes nothing to Quebec. 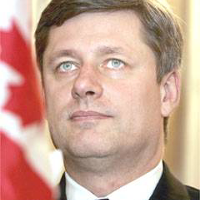 Harper's the only person in the county happier about the NDP's showing than Jack Layton because the NDP did to the Liberals exactly what Reformers and Alliance members used to do to the Tories. And thanks to the realities of parliamentary democracy, Layton has performed a surrealistic electoral magic trick –- he keeps gaining more seats and less power. In 2004 he had 19 seats, but held the balance of power in a Liberal minority government. Today his seats are in triple digits and the only real power he's going to have in Ottawa when parliament resumes is the ability to order pizza at Stornoway.

When Harper was ruling with a minority, he was found in contempt of parliament, and now he's supposed to be sweating about the possibility of Jack Layton asking… the same questions Harper ignored when he had a minority?

Money's cut off, can we bunk together?

Harper also has to be thrilled for Elizabeth May who adds another option for anti-Tory voters in 2015. But May may have won her seat, but lost her party. The corks were still in the champagne at Tory HQ when CBC reported that the per-vote subsidy is dead. And with the subsidy gone who's going to cut big enough cheques for the Greens to be able to do much more than keep May's seat?

Meanwhile, Bob Rae appeared to announce that the only way to take down the ReformaTories in 2015 is by following the Reform/Alliance/Tory playbook and "merging," which, thanks to the disappearance of that per-vote subsidy, may be inevitable in order to give anyone a fighting chance –- especially when the Tories change the rules back to allow corporate donations to political parties (you read that last part here first).

Michael Ignatieff and Gilles Duceppe both led their parties to epic defeats that will allow them to share a space in the history books with Kim "2 seats" Campbell –- but they both personally won when the voters in their own ridings conveniently euthanized their political careers. Ignatieff's passionate, eloquent farewell speech -- and with no seat in Parliament it was definitely a farewell -- opened the door for a battle between Liberals who are ready for "merger" talks with the NDP (let's call them Rae dazed) and Liberals determined to revive the party of Pierre Trudeau, who may well rally behind Justin Trudeau.

And now we get to see the not-so hidden agenda. I think Harper will keep his promise and he won't reopen debates on issues like capital punishment and abortion -- and not just because I don't think he's going to deign to debate anyone about anything, but because he'll appoint judges who will do that for him.

Stephen Harper won the election, but make no mistake -- yesterday this was a country created and defined by Lester Pearson, Tommy Douglas and Pierre Trudeau; this morning Canada belongs to Preston Manning.