More than 100,000 protestors converged on the state capitol building in Madison, Wisconsin last Saturday, after the Governor Scott Walker approved a law stripping the state's 175,000 public sector workers of their bargaining rights yesterday. Wisconsin is the canary in the coal mine. Events unfolding in Madison should serve as a warning, and as call to attention to all of us, including in British Columbia. 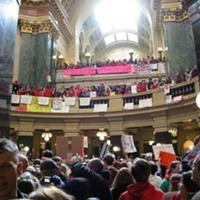 In Wisconsin as elsewhere, public sectors workers are being framed for problems they did not create. The familiar refrain goes as follows: the budget deficit is in the hole, the public sector is bloated, and the unions are inflexible and greedy. The story is repeated ad nauseam, in compliant mainstream media commentary. The same right-wing rhetoric is now commonplace in Canada.

We need to stop the race to the bottom. Wisconsin Governor Scott Walker is using public employees as scapegoats. He attempted to set private workers against public sector workers. The people of Wisconsin didn't buy it: several polls indicated that a majority of Wisconsin voters were opposed to what their government did.

It's time to readjust the lens. Why should anybody condemn the Madison protestors because they are middle class workers protesting for the right to maintain a living wage, good working conditions, and a decent retirement? Most of us share those very same aspirations: to have a decent job, provide a good life for our families, and to contribute to our communities. The fact is Wisconsin public sector workers are paid less than private sector workers, according to the Economist.

BC public sector is leanest in Canada

The public sector is not the problem. In British Columbia, we have the leanest public sector in the country, on a per capita basis, which has just gone through a decade of brutal cuts. Existing BCGEU public service workers enjoy a decent and fair wage -- the average is $52,000. In the past decade, public sector workers received annual increases of 0.15 per cent, taking inflation into account. That is roughly equivalent to earning an extra $77 over the course of the year. And our members will not receive a raise this year, regardless of inflation, which stood at 2.3 per cent in January. None of this is the stuff of excess that commentators might have you believe. You don't join the government to get rich. And I shudder to think what public sector workers would've received from the BC Liberals without the BCGEU on their side.

No, the real problem is not the public sector. It's about growing income inequality between the richest and poorest in our province, and about tax fairness -- or rather lack thereof.

Here the shocking truth: the richest one per cent of British Columbians now benefit from a lower total tax rate than the poorest 10 per cent of B.C. residents. And for the middle-income earners, Liberal governments tax cuts have more than been offset by increases to Medical Service Plan premiums, user fees, and tuition costs. In short, the tax system is now reinforcing the growing gap between the rich and the rest of us. How is that fair?

We have a tax fairness problem

The bottom line is we don't have a public sector problem. We have an income inequality and a tax fairness problem.

The labour movement will not stand for a race to the bottom, and neither are the people of Wisconsin. Efforts to curtail labour rights could be just what's needed to remind everyone that the workplace rights we take for granted were fought for, and must be defended.

Wisconsin Governor Scott Walker's real agenda was never about balancing the state budget; it is about attacking unions and stripping workers of their fundamental labour rights. Over 100,000 people sent that message on the streets of Madison, joining to oppose his attack on decent work.