As tens of millions of Egyptians celebrated their victory over a brutal dictator and began the task of creating democracy, the story from Canada was of democracy going backwards. For five years under Stephen Harper, Canada has been subjected to a systematic erosion of democracy (as I say here). Canada is not Egypt and Harper is no Mubarak, but he is nonetheless a ruthless autocrat in the Canadian context, too often showing contempt for democracy and the aspirations of the people he governs. 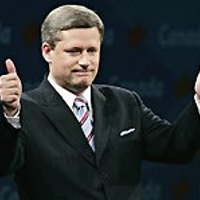 It can hardly be surprising that almost alone among western leaders, Stephen Harper was so grudging in his response to the wonderful victory of the Egyptian people. Rather than praise the millions in the street, Harper actually praised Mubarak: "Canada respects President Mubarak's decision to step down in order to promote peace and stability in the country." Damning by faint praise?

The day that Mubarak finally resigned to the deafening cheers of a million people in Tahrir (liberation) Square was also the day that another repugnant example of the Harper government's casual abuse of power was highlighted. This time, it was a scathing ruling against the government from the Speaker of the House, related to Harper's decision to eliminate funding to the ecumenical development group, KAIROS. It was a fitting coincidence: KAIROS's funding was cut due to its alleged anti-Israel bias. Harper's barely disguised opposition to the revolution in Egypt is linked to his blind support of Israel and the recognition that democracy in Egypt is seen as a threat in the Jewish state.

The issue ruled on by the Speaker involved a document prepared by the senior staff of CIDA recommending that the government provide KAIROS -- which has been providing development aid to the Third World since the 1970s -- with a $7 million grant over four years. At issue was the fact that someone had inserted the word not into the final line of the CIDA report, which read: "Recommendation: That you (Minister Oda) sign below to indicate that you approve a contribution of $7,098,758..." The word not was inserted before the word approve. Oda had already signed the document, which would have made the contract legally binding. The almost universal assumption is that the crude and illegal action was taken after Stephen Harper and Jason Kenney, his point man on Israel, decided that KAIROS was anti-Israeli and had to be punished.

Speaker Milliken stated that because of a technicality he could take no further action against Oda, but made clear he would like to, stating there were "...profoundly disturbing questions that evidently remain unanswered." Ruling that the document had been "doctored," he wrote: "Any reasonable person confronted with what appears to have transpired would necessarily be extremely concerned, if not shocked."

Shocked hardly describes it. This is political thuggery worthy of a dictatorship. It clearly originated in the PMO, but Bev Oda, the hapless minister of International Cooperation, was assigned the role of Official Stonewaller. Oda's answers to questions put to her by a parliamentary committee reveal an arrogance of power that is identical in its mentality to the dozens of autocracies around the world. Oda stated she didn't know who doctored the documents she signed, but said: "I know that the decision ultimately reflects the decision I would support."

That is almost impossible to believe. Almost surely, the only reason the note was inserted into the document was that it had already been signed by Oda -- indicating she accepted the recommendation by CIDA officials. Had Oda not signed, authorizing payment of the grant, there would have been no need to doctor the document to reverse its intent. She could simply have declined to sign it and announced that KAIROS would not be getting a grant. The vulgar method used to circumvent the law demonstrates just how little this government cares about the rule of law. They couldn't even be bothered to make it credible.

But this kind of repeated violation of democracy and the law by Harper and his ever-willing cabinet hit squad does not often bring Canadians into the street. How many people watching the democratic revolution in Egypt unfold have been prompted by this joyful outpouring to contemplate the fact that while Egyptians are moving forward in terms of their own nation and democracy, we are moving steadily backwards? Do they see any contradiction in their admiration and amazement at this wonderful spirit of democracy and our own retreat? Do they ask why Egyptians care much more passionately for democracy and determining their own future than we appear to?

Is it simply that you don't know what you've got 'til it's gone? In Egypt, years of oppression, brutality, humiliation and the simple lack of any semblance of real government drove the massive support for democracy in the streets. Maybe only the promise of democracy can motivate people in this profound way.

Or have Canadians simply lost faith in democracy as they increasingly lower their expectations of what government can or will do for them? Ultimately we judge democracy by what it delivers -- and it used to deliver, and promise, a lot more. Are Canadians more and more just circling the wagons around their individual or family lives, looking for individualist solutions? With wages flat since 1980, 92 per cent of private pension funds in deficit (total $350 billion, almost double the 2003 figure) and holding record levels of debt, this solution must surely look just as bleak as hoping for political change.

Or could it simply be that there are too few venues and opportunities for Canadians to express their dismay at the loss of democracy? After Harper's second prorogation of Parliament (over the Afghan detainee issue), virtually every political pundit and analyst in the country predicted that no one cared and most couldn't even pronounce the word. Yet almost overnight (in organizing terms), more than 220,000 people signed on to a Facebook page opposing prorogation, and within a few weeks there were simultaneous demonstrations in 61 cities across the country featuring 25,000 people. These were not organized by existing social justice groups or unions (though they came to help) and were as spontaneous as reserved Canadians get. They did care about democracy. They knew -- or took the time to find out -- what prorogation meant, and they were angry.

This should have been the signal for the Opposition parties to take up the cause, but it wasn't enough to cut through the cynicism of the political operatives who run the Liberals and the NDP. By their pusillanimous calculations, if an issue doesn't affect the pocket book (home heating oil), people don't care. Would hundreds of thousands of people come into the streets if these parties called on them to defend democracy? Probably not. But they might come to the polling booths and rid the country of our own autocrat.