The first news of the shooting of Congresswoman Gabrielle Giffords and at least 18 others carried all the ingredients anyone might need to admit that this is where the wild, paranoid side of political discourse within America has inevitably led. 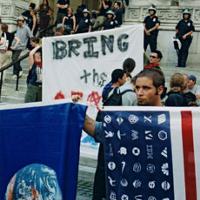 In America, There's No Debate

It happened in Arizona, hotbed of Tea Party hysterics. The target was a Democrat who dared support a black president's liberal reforms. It was done with a gun, after months of demagogic and unfounded claims by the right that the president and his party wanted to take away gun rights. It was done in a public setting to people who lacked any real measure of protection, because Arizona's right wing has won the legal right for anyone to carry a concealed weapon, even in public gatherings.

And yet the American television talk shows Sunday refused to acknowledge the obvious, failed to press on with the fundamentally revised conversation so clearly needed. How to pull the nation back from this brink of a permanently poisoned civil society? How to keep the country from passing into the even more fierce wilderness now visible ahead, where choosing to become a Democrat politician in a red state means not only will you will be painted as an anti-American demon, but you must now weigh the manifest possibility of being murdered for your decision?

Instead, anyone who dared implicate in this tragedy Sarah Palin's "reload" mantra, or the cross-hairs imagery employed in Republican election ads, was swatted down on the air by conservatives assuring that we don't know why Jared Loughner did what he did. It "cheapens" the tragedy to want to contextualize it, they said. Loughner seemed to be mentally unbalanced, they noted, as if that was some sort of total explanation that granted absolution to what America's political culture has become.

Here is why that is no absolution, but rather an indictment of what those conservatives, and Fox News and the rest of their supportive media, have enabled.

If you know there are mentally unhinged people in your midst, as of course there always have been and always will be in American society as in every other society, would you not employ the precautionary principle in your political rhetoric? Would you not refrain from using violent imagery and extremely polarizing characterizations when sorting the political landscape into friends and enemies? Would you not foster fair-minded debate between fellow citizens with whom you disagree? Would you not take the moral responsibility to carry out your public conversation, available to the ears of all, including the deranged, in a language that gave no cause for the deranged to pick up a gun and act on what they, of all people, were predictably to take literally?

And would you not make it difficult rather than ludicrously easy for those deranged fellow citizens to purchase and conceal that gun before using it to eliminate the enemies who, you say, were meant to be merely the targets of your euphemisms?

But America's militant right and their winking Republican supporters have instead recruited the mentally ill as a sort of shadow army, filling their heads daily with paranoid, angry, violent imagery that relentlessly objectifies and dismisses as worthless those who disagree. And they have armed that shadow army with their crusade to make guns more easily available. Whether they have recruited this army deliberately or simply through reckless disregard really matters little. The tragic outcome is the same.

This is one of those crossroads similar to that which followed 9-11. Responsible Americans should now shoulder the burden of a calm and honest reckoning of some kind. This shooting and its cultural context is in need of good faith reflection and dissection from diverse, sober points of view. But the process would have to start by recognizing that the time for reckoning has arrived. Instead, as after 9-11, the audience for Sunday's national discussion shows were infantilized, expected to nod and agree that it would be somehow unseemly to ask difficult and complex questions of themselves and the culture in which they participate.

Black and white simplification such as dismissing this event as just the work of a madman is a refusal to engage in mature, adult analysis of the meanings of violence in American society. And then in the future this unexamined society may well careen to the next outburst and the next, down a slippery slope into some even more dire civic catastrophe.