All the Eh's down in Eh-ville 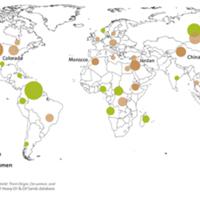 Liked green quite a bit

But this sent their leader, Steve, into a snit

No, he preferred jet fighters, prisons with fences

And protecting our freedom from the threat of the census

So he stumped for the tar sands, despite all their failings

Made a law telling ducks not to land on the tailings

And when Parliament passed a good climate bill

Steve made sure the Senate made the kill

(No matter the Senate he once said he'd scrap it

He liked it much better now that he stacked it)

But one day Steve was lonely, bored with attack ads

He thought about his subjects, all those Eh gals and lads.

"Why they're out drinking coffee at Tim's and Starbucks

Just as he wondered what votes this may pay

He was approached by Little Johnny-Jim Eh

Who, instead, asked Steve why he thought it so crafty

"Fret not, little man, things are quite rosy

When I'm cold, there's a blue sweater that keeps me quite cozy"

"But our climate," the boy asked, "who will look after it

When the fossil fuel boys treat it like s--t?"

"Ah, your bad facts must come from the CBC

When instead you should be watching the new Sun TV!"

"But the science," pressed Johnny-Jim, "isn't going away

You can't porogue nature, no way.

And, writing a book on hockey is nice

But how can you play it without any ice?

And, if you think illegal migrants are an issue today

Sea level rise will send a million our way!

Or, our friends the farmers, just how will they fare

All this sounded to Steve like a really bad dream

Or, even worse, some big socialist scheme

But then Johnny-Jim got to the stuff that is good

Once we decide to fight for the 'hood

"Eh-ville has lots of sun, wind and rain

That can power our hard work and play

But also computers, teachers, and brains

You say more jobs you want to create

So, will you make our economy great?"

Steve began to think the boy had a point

And that maybe there was more to running this joint

He thought he may need better planning

And that maybe he really should listen to Manning

And tell our children about pollution long ago seen"

Some believe Steve's chakra grew by three sizes that day

But then again, those were the hippies at play

He swung into action, now keen to the max

He started hanging out with Al Gore

And went up to his attic with R-24

Of wasting the earth to get the black stuff

In sum, he changed from that brown sort of guy

Scratched his head and thought, oh my:

'Maybe preserving the place where we live

Is the true meaning of conservative'

And here the happy conversion ends

Now Steve gets by with a little help from green friends