Every now and then a group of respected scientists put on their nerdy rubber boots and then bravely wade into a swamp of scientific literature. 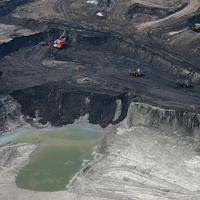 The goal, of course, is to shed some proverbial light on a highly contentious or viscous matter.

Seven members of the Royal Society did just that on the oil sands and their published efforts yesterday offered some important illumination as well as more murk.

Bill Donahue, an independent Edmonton-based expert on water policy and science, clearly summed up the essence of the report: "It is a scathing indictment of the failure of Alberta to regulate." Period.

As discreet communicators, the scientists found, for example, that environmental assessment process had "serious deficiencies in relation to international best practice."

Moreover the capacity of Alberta regulators to protect the public interest with skilled scientific analysis remained a real "concern" while the federal government (and you guessed it) maintained "a very low profile" on oil sands development.

(Just last week the Commissioner of the Environment and Sustainable Development disclosed how low that profile has sunk: Ottawa has but one long-term monitoring station on the Athabasca River downstream of the oil sands, and as of June 2010 it wasn’t even measuring oil sands pollutants.)

As a consequence of such unseemly profiles, the expert panel squarely painted Ottawa as a salamander in the sand at a time when the country needs a wise owl overseeing things.

Moreover the scientists weren't impressed with the shenanigans of petro politicians in Alberta where all pollution tends to be natural because all bitumen must be ethical.

Outrageous comments about dead ducks, for instance, "[raise] serious questions about the motivation of the cabinet ministers involved toward environmental responsibility."

The report also found it odd that two key regulators, Alberta Environment and Sustainable Development, no longer participate in public hearings on oil sands. In other words decisions are being made "without the benefit of the public input from Alberta's primary environmental regulators."

The expert panel, too, strongly echoed a growing and vocal chorus on the inadequate state of water monitoring on the Athabasca River. Valid concerns about the industry-funded Regional Aquatic Monitoring Program, say the report, "must be addressed." (Numerous reports, including a 2004 federal study, have squarely questioned the integrity of RAMP.)

Contrary to industry and government claims of no worries, the scientists found "considerable uncertainty" about water quality and recommended prompt action to deal "with the wide range of monitoring challenges that RAMP faces for identifying any impacts of oil sands development." The Department of Fisheries and Oceans has found nothing but uncertainties too.

Kelly and Schindler as catalysts

Not surprisingly the report highlighted the important findings of Erin Kelly and David Schindler, whose studies proved that pollution on the Athabasca River is no longer natural.

Basically designed to disprove industrial claims of immaculate bitumen production and nothing more, the Kelly and Schindler studies have now forced two high-level scientific investigations on river monitoring and pollution.

On groundwater the expert panel smartly restated the findings of an excellent 2009 Council of Canadian Academies report on the same subject. Despite the extensive use of aquifers by industry and 30-year-old recommendations for proper studies, "The regional cumulative impact on groundwater quantity and quality has not been assessed."

No pass on GHG emissions

The Royal Society stuck to the basics on the GHG emissions. It concluded that bitumen is indeed dirty and that bitumen from steam plants has the highest emissions of all global crude sources. As a consequence oil sands expansion "creates a major challenge for Canada to meet our international commitments for overall GHG emissions reduction."

Moreover the report raises serious doubts about carbon capture and storage (CCS), the dismal art of burying pollution underground. Alberta's tax on carbon emissions can't raise enough money to build such a multi-billion system. Moreover CCS simply won't work for the oil sands because "the geology of northeastern Alberta is not a good candidate."

The panel also sets the record straight on the uncertain state of reclamation. "Contrary to popular belief the legislation and regulation do not require reclamation to boreal forest ecosystems."

Big questions remain about engineering boreal life as well as the ability of industry to remake wetlands or peatlands.

Moreover, Albertan taxpayers are on the bitumen hook too: "substantial improvements are needed to the current financial security arrangements to minimize the potential liability to the public purse."

Last but not least the Royal Society also noted that regulators such as Alberta Environment and the Energy Resources Conservation Board don't have the manpower or expertise to really keep up with the scale of development.

Concluded the report, "These agencies need to seriously review whether they have and can effectively maintain the specialized technical expertise needed to regulate industrial development of this scope and sophistication, particularly in a preventive manner that demands detailed industry-specific technical knowledge by its regulatory personnel."

Although the 438-page document exposes the scale of government incompetence on scientific issues, it also solidly reflects the poor state of science research on the project. After telling readers how poor the quality of monitoring science is, the expert panel then takes the results of this same inadequate monitoring at face value.

Drawing on sketchy data from 15 air quality stations in the Wood Buffalo region (even industry insiders question the adequacy, location and number of the stations for an area the size of Tasmania), the scientists assume that air quality is somehow okay. It is not. The industry-funded air quality program needs a reality check as badly as the region's water measurements.

Moreover the report later notes another stunning observation about the general state of air quality monitoring in the province: "Alberta has never developed a high-standard infrastructure of research and air quality studies found in other jurisdictions." Now that's the truth.

The scientists also bungle the cancer story downstream. Their terse review of the 2009 Alberta Cancer Study, which notes that big oil projects do beget cancer problems, is grossly incomplete. That study highlighted a group of Fort Chip residents that worked in the mines and later died in Fort McMurray at the average age of 42. Unlike residents of Fort Chip, they died from totally different cancers.

The expert panel also errs in a major way by drawing upon an error-ridden report largely written and released by Health Canada officials to cast aspersions on Dr. John O'Connor, the doctor that boldly drew attention to cancers downstream.

Quoting an unreferenced and inaccurate document containing outright lies is not something a bunch of so-called experts should be doing.

Yet to the panel's credit, it did recognize that Fort McMurray has the worrisome public health profile of a boomtown (everything from drugs to STD's) or what it calls "obvious health indicator disparities."

While the scientists got seriously bogged down in at least two areas (and the oil sands are a veritable swamp), their report generally confirms that all is not well in the sands in terms of monitoring or basic research. They also get the big regulatory picture right and it's not comforting for citizens or investors.

If we regulated hockey the same shoddy way we now regulate the oil sands and its impacts, here's how things might look:

Inadequate trained referees would govern hockey players on improperly maintained ice in arenas of varying sizes. Not only would the scoring records of players remain a state secret, but no one would be able to track cumulative team performance overtime.

In short, no one would watch let alone buy tickets.

Eventually, the Royal Society might write about these "serious deficiencies."