"Each man is afraid of his neighbour's disapproval -- a thing which, to the general run of the human race, is more dreaded than wolves and death." -- Mark Twain 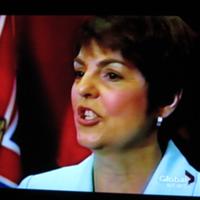 Making Sense of a Brutal Political Season in BC

Beneath the raw emotions in the resignation of both the BC Liberal and New Democrat Party leaders lie cold, hard facts -- neither Gordon Campbell nor Carole James could win the next election.

Forget titillating stories about the spitting mad premier or the opposition caucus coup. And disregard pundits who say the NDP blew a guaranteed election win -- that was never the case.

Instead, examine the reality that forced both out by listening to veteran public opinion researcher Mario Canseco, who analyses the polling, not the politicians.

The Angus Reid Public Opinion vice-president makes it clear that in James' case, her very low personal approval rating of 25 per cent when the NDP was polling at 47 per cent was a strong sign of a disaster ahead.

That's also why with the incredibly unpopular Campbell gone – his approval rating dipped to just nine per cent -- James was trouble-bound.

In a new Angus Reid poll released Thursday, the NDP and BC Liberals are now tied at 36 per cent each as they seek new leaders.

Canseco says his warning also applies to three Canadian provincial premiers whose personal approval ratings show they aren't connecting to voters, while their opposition leaders are.

"You look at other leaders in the country -- Danielle Smith is way ahead of Premier Ed Stelmach in Alberta, Tim Hudak over Premier Dalton McGuinty in Ontario and Hugh McFadyen ahead of Premier Greg Selinger in Manitoba," Canseco said in an interview with 24 Hours, suggesting all three premiers could be defeated.

"The leader needs to be as close to the voting intention as possible. If you exceed it, fantastic," he said.

That's why Canseco says the 22 per cent gap between Carole James' personal approval and the NDP's standing was bound to create grief.

In fact, Canseco even predicted the internal party trouble that lay ahead for James back in September, before she unilaterally expelled MLA Bob Simpson from her caucus and before caucus chair Norm Macdonald and whip Katrine Conroy quit in protest over lack of process.

Here's what Canseco told The Globe and Mail newspaper's Ian Bailey on Sept. 23:

"Almost half of B.C. decided voters are willing to support [the NDP], but considerably fewer see Carole James as a leader they approve of. If this gap remains, the BC Liberals stand to recover some of their lost support, particularly if Campbell steps down," Canseco said then.

Worst off was the Saskatchewan NDP's Dwaine Lingenfelter, with an astonishing 57 per cent disapproval rating, followed closely by New Brunswick Liberal leader Shawn Graham -- who has announced his resignation already -- at 55 per cent.

But not far behind at 49 per cent each in the disliked sweepstakes were pro-sovereignty Parti Quebecois opposition leader Pauline Marois -- and B.C's Carole James.

Compare that to Alberta Wildrose Alliance Party leader Danielle Smith, who was disapproved by just 21 per cent or Ontario Progressive Conservativeleader Tim Hudak, with only 23 per cent disapproving of his performance, and Manitoba Conservative Hugh McFadyen at 31 per cent.

Polling shows that Smith, Hudak and McFadyen all have real shots at becoming premier in their provinces' next elections, with opposition parties polling ahead of the current government parties.

But here in British Columbia things were very different.

I asked Canseco if he had ever seen both a premier and opposition leader in the same province as unpopular as Gordon Campbell and Carole James were.

"No. That's the interesting part of it Almost 60 per cent of people last time [we polled] said they don't like either option," he said.

The explanation for Campbell's sudden fall from grace is simple -- the surprise introduction of the unpopular Harmonized Sales Tax just weeks after the 2009 provincial election when the BC Liberals denied any HST intentions.

But interestingly, Canseco says the 2009 election was an enormously squandered opportunity for James to potentially win by addressing voters' concerns about the economy -- the overwhelming number one issue at that time -- and how she would handle it if chosen premier.

Well, Canseco points out that prior to the 2009 election the NDP was only narrowly ahead of the BC Liberals in opinion polling for a brief time -- in the late summer to fall of 2008, shortly after the unpopular carbon tax was introduced.

Politics is a tough game -- and the numbers prove it.