As we head into a new political season it looks depressingly like the old: a stand-off between the malignant minority government of Stephen Harper and the seriously diminished Liberal Party and its hapless leader Michael Ignatieff. Both these parties and their leaders are so off the mark in terms of what Canadians want and need that they can't even break through the 30 per cent support mark. Harper seems to have written off Quebec -- a typically petulant response to that province's stubborn attraction to social democracy. The Liberals have lost their ability to connect with Quebec as well, virtually guaranteeing that the Bloc Quebecois will continue to dominate that province and make a majority federal government almost impossible. 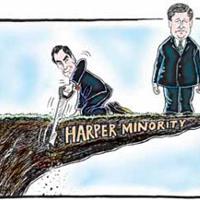 In this seemingly pathological stalemate Harper's efforts to dismantle the federal government continue unabated. He rules the country by repeated doses of fear. It's all about keeping Canadians off-balance so they can't keep their eye on the stuff that actually matters. The census: be afraid of the evil, nosy government prying into your affairs and "intruding" into your life. The tough-on-crime bills: be afraid of the bogeyman -- especially the unreported crime that Stockwell Day wants to build prisons for (because reported crime is rapidly decreasing).

Be very afraid of Tamil refugees all waiting to form into terror cells as soon as we apply our humanitarianism to their plight. And while we should not forget to be afraid of crime, we should also find time to be afraid of the gun registry. Ignore the police who say it helps fight crime -- and learn to understand that as scary as crime is, it isn't nearly as scary as government. Better a lunatic with an untraceable gun than a "bureaucrat" interfering with your freedoms. And be afraid of the Russians (to the tune of $16 billion for useless jet fighters) whose routine training flights in the north are suddenly classified as attempted incursions into Canadian air space.

No prime minister in our history has actually shown contempt for the very principle of government. But this is Stephen Harper, who equates government with restrictions on freedom. This is behind his absurd attack on the census: make it as difficult as possible for your own government to function properly. And if you hate Medicare as much as Harper does, then you order your health minister not to show up at the annual meeting of the Canadian Medical Association (the first time ever).

Prime opportunity for the NDP

More than one commentator has asked in exasperation: who will rid the country of this odious pretender to the office of prime minister? The answer could be the NDP -- if it is up to task. Can it rise above the game playing and the infantile tactical wars in Ottawa and actually respond to the people of the country who are seeking genuine leadership? So far the answer has been a disappointing no.

The NDP is, given the current political landscape, the only party capable of responding effectively to the stated values of most Canadians outside Quebec. The Greens, until there is proportional representation, are simply not in the game. History is made by those who show up.

I am talking about real leadership here, and I don't mean on things like child care, affordable housing and enhancing Medicare. These are absolutely critical issues and the NDP can be expected to continue to push for them. But this is not bold leadership -- almost everyone thinks we should have child care and is appalled at our poverty levels -- and Canadians have a love affair with Medicare. This is no-risk leadership. It doesn't lead at all, it just follows a safe path defined by polls and focus groups.

Be bold about your beliefs

Leadership is being out in front, challenging people to examine their values and act accordingly; it's taking a chance. As I have said before, bold leaders attract attention and support simply by being bold about things they believe in. Ronald Reagan was the best example of this. The Democrats were opportunistic to the point of nausea -- people voted for someone who actually believed what he was saying even though they most often disagreed with his policies. People know that Jack Layton doesn't really support doubling the number of people in jail -- so they know he is asking them to vote for him even though he is misleading them about what he and his party believe.

We will know if the NDP is capable of leading the country by watching a handful of key issues on which the future of the country and its political culture depend. All of them entail risk, but all of them fit well within what two thirds of Canadians say they want or would consider. In my view, all of them -- some quickly, others over time -- would boost the NDP's electoral fortunes and could begin to transform Canadian politics.

Five paths to many more votes

First, the NDP needs to be talking openly about a coalition government to replace the Harper Conservatives, and about the need for proportional representation. So far it has taken the cheap route to the high moral ground, indicating it would be willing to talk but refusing to take the lead by putting the Liberals on the spot. It's risky, but they could acknowledge the risk as worth taking to save the country.

Second, the NDP must come out talking about the critical necessity of increasing taxes -- not just on the wealthy and corporations but on the middle class who have also received unsustainable tax cuts. Taxes are the price we pay for the kind of society the NDP says it stands for. The Liberals know they are needed and would be hard-pressed to attack the NDP, especially when one of their own, John Manley, as spokesman for the largest corporations in the country, has called for tax increases.

Third, the NDP has to take a strong and uncompromising stand against the cynical crime bills that Harper intends to re-introduce this fall. There are few more humiliating chapters in the NDP's history than their previous support for these same offensive bills. To support them is to support incarcerating tens of thousands more Canadians -- competing with the U.S. for a medal in moral failure -- and accomplishing exactly nothing in terms of public safety.

Fourth, there is absolutely no excuse now for the NDP leader not to apply the whip on his caucus the issue of the long gun registry, insisting that they all vote against a Conservative private member’s bill eliminating the registry. The Liberals are now united against the bill. The leaks from the RCMP report testifying to its usefulness and cost-effectiveness and the plans by Canadian police chiefs to launch a campaign in support for the registry is all he needs to demand unity.

Lastly, the NDP must come out with a clear attack on the outrageous level of defence spending this country now takes for granted, using the $16 billion order for fighter jets as its launching point. We now spend more on defence, proportionally, that at any time since the Second World War, and Harper intends to continue increasing the defence budget for the next 10 years, given the opportunity. Yet Canada has never been less likely to be the target of a military attack. And there is no appetite for U.S.-style pre-emptive wars against "terrorist" states.

The NDP party and many pundits have rightly given Jack Layton credit for reviving a party that many of its detractors predicted was virtually dead. But it is time to move beyond the incrementalist strategy of adding a few seats in each election. The country doesn't have time for it. The NDP's gradual success -- even assuming it works -- will track the steady decline of the country and a continuing change in its political culture. (Remember, Fox News North is coming). By the time the NDP "succeeds," support for social democracy may well have declined to the point where its strategy produces only a Pyrrhic victory.

It is time for game-changer -- something that will transform the political landscape, create debate, give people hope and demonstrate to Canadians that there just might be something worth voting for next time.

Over to you, Jack.