Is the world, including Canada, headed for the third great depression, as New York Times columnist Paul Krugman argues? Watching the results of the G8/G20 meetings was like hearing news that a giant comet is heading for earth and we are just waiting for impact. Those meetings of the world's largest and/or growing economies committed governments to massive deficit reduction in spite of the real concern that we are facing a the possibility of a so-called "double-dip" recession. That possibility is now a certainty. 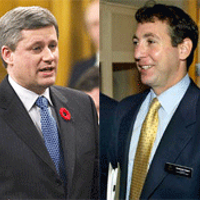 Aspers and Harper, A Toried Love

Leading the charge on this ideological lunacy was none other than free-market Ayatollah Stephen Harper whose passion for diminishing the role of government is unmatched by any of the other leaders who showed up in Toronto. Of course, Harper does not really care about deficits per se -- he actually needs them because the provide him with the crisis he needs to rationalize what he wants to do, which is to slash the social democratic state. People forget that this man once headed up the National Citizens Coalition (motto: "More freedom through less government") which was founded by an insurance agent to fight the implementation of Medicare.

There seems to be no prospect in the current configuration of national politics of a party campaigning for increasing taxes to deal with the deficit so Harper, Stockwell Day and Jim Flaherty will have a free hand to make massive cuts to social and other spending. That should actually concern business given how much government money is actually spent in the private sector. Government is far and away the single largest consumer of private goods and services in the country. But ideology can trump even self-interest.

It is instructive that the increase in government spending to counter the recession was framed as "stimulus" spending as if such spending has not always been a stimulus and a normal part of the economy. We have arrived at a point where new government spending and investment is seen as an aberration. Our municipal infrastructure deficit is still counted in the tens of billions. But there will be no more money for these critical services because the only way the Harper government can justify such spending is to deal with a temporary crisis.

The plan to turn government's full attention to deficit reduction is nothing less than a plan to create a recession. While the Canadian economy is doing better than its U.S. counterpart, most of the recent job growth has been in the services industries and half are part-time. The crisis in Europe and the dismal prospects for the U.S. economy still hold serious threats to the private sector in Canada and slashing government spending just adds to the risk.

We have been through this planned recession scenario before, in the 1990s under then finance minister Paul Martin. For most of that decade Martin deliberately kept unemployment at an unconscionable nine per cent in his effort to implement his "labour flexibility" policy -- driving down the cost and power of labour. He used an artificially low inflation target of under 2 per cent to keep interest rates high and it cost the economy tens of billions of dollars in lost production. He also slashed social spending, lopping some $25 billion -- 40 per cent off federal contributions -- over three years.

What saved us from this draconian set of policies was a booming U.S. economy and an extremely low Canadian dollar. As it turned out, the deficit would have been eliminated by these factors without any cuts.

But we won't be saved this time around by a strong U.S. economy or a 65 cent dollar -- those days are over. And once the massive stimulus spending in the U.S. dries up, it will get even worse. In addition, Canadians are now drowning in personal debt, which even the bankers agree is unsustainable. A consumer-led recovery can't be done on credit cards at 22 per cent interest.

In the past 20 years, Canada has witnessed the greatest transfer of wealth from the poor and middle classes to the rich in our history. It's a process that will continue unabated with the current policies.

The money that the working and middle classes used to earn and spend now goes into the pockets of the wealthy, who can only spend so much. So more and more of the wealth of the nation ends up in the bank accounts and stock holdings of the rich where it is fodder for the casino economy. Everyone else borrows endlessly to maintain the lifestyle the advertisers say they must have to be happy. The banks get ever richer from outrageous interest rates -- but they sit on the money because businesses aren't borrowing: people have quit spending as much, and there is little new investment. So that means that the corporations' retained earnings get larger and larger with nowhere to go. (In the U.S., non-financial companies have accumulated a record $1.84-trillion in cash -- the biggest horde in 40 years.)

In short, we have bales of cash backing up in the bank accounts of the rich and the coffers of the banks and other large corporations -- while the people these same corporations need to be spending have less and less money.

One might ask what on earth the capitalist economic planners are thinking, but of course there are no economic planners any more, especially in Ottawa. Despite the recent global economic disaster, nothing has really changed. The prevailing ideology and government policy still preaches self-regulation and laissez-faire -- and when the next disaster occurs, we will bail the scoundrels out again with short term "stimulus."

It would be comforting to think that many more middle-class people would begin to examine their compulsive consumer lifestyles when facing long-term economic hardship. That would start to form the basis of an economy based on prosperity without growth. But the figures on personal debt are not encouraging. It will take more than personal financial crises to change a culture and an economy headed for the cliff edge. In the meantime we can sit on our porches and watch the nation shrink.