"If you don't try to win you might as well hold the Olympics in somebody's back yard." -- Jesse Owens, Olympic gold medalist 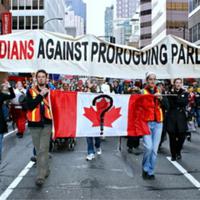 2010 Winter Olympic Games visitors: It's great you came to Vancouver in mid-February, or as we like to call it, "early summer!"

It's literally not possible to give you a warmer welcome to our back yard!

Not that it's a good thing, but your margarita has more ice than our Cypress Mountain snowboarding course!

So please return the leftover slush to your bartender -- it will be sent by helicopter up the hill.

To enjoy yourselves fully, you should know more about our politics.

First, you may have seen recent international news about a Canadian premier being forced to stay in the United States during our Olympics.

Please don't mix up our premiers! Rest assured that it's Newfoundland Premier Danny Williams from eastern Canada, who's having heart surgery in America, not our British Columbia Premier Gordon Campbell.

Premier Campbell also visited the U.S. and was forced to stay there too, but that was for drunk driving in Hawaii a while back. He's fine now.

Oh, and especially for Americans, pronounce it preem-yurr -- not prem-yeer -- it's not a bloody movie opening!

Actually, you may have seen pictures of Premier Campbell this weekend being strung up -- something most British Columbians have been waiting years for.

The premier tried out a new 2010 "zip-line" that flies right over B.C. Supreme Court -- something Campbell has managed to do since the police raided the B.C. Legislature in 2003 -- but his ride may soon end when three former government aides finally face corruption charges -- after the Olympics!

Canada's prime minister, Stephen Harper, is also visiting. Harper will make a rare address to the Legislature Thursday in Victoria -- that's almost as unusual as him speaking in his own parliament in Ottawa, since he suspended it months ago.

The nice way to protest

No, we're not one of those tinpot dictatorships! We're allowed to freely protest "proroguing" on Facebook and anything else we want at the Olympics in specially designated "free speech" zones, if only we knew where they are!

And don't forget to visit some local politics sites. I highly recommend checking out the lovely Bloedel Conservatory, where rare birds and tropical plants are found.

If you're really lucky you can spot one of Vancouver's most highly endangered creatures of all -- the NPA!

The Non-Partisanus-Associatis once actually long ruled our entire city from its roost at 12th and Cambie but now, sadly, their numbers have dwindled dramatically and they must be preserved in the protective hothouse Bloedel environment, or Conserve-A-Tory.

The NPA used to soar proudly over our city but is now flightless, as it evolved to have just a stunted right wing! Indeed, only 50 of these once-plentiful birds were spotted at their last gathering.

You can occasionally see an NPA -- like a Suzanne Anton or Ian Robertson -- at City Council or Park Board, wildly flapping but getting nowhere. Warning: it may disturb children.

Have fun in Vancouver -- where politics is always good sport!