It's not what Afghans want, but that didn’t dampen the euphoria about a cheap and easy "exit strategy" from Afghanistan that was the talk of the town leading up to the big international gathering in London last Thursday. Foreign ministers, diplomats and mandarins from more than 60 countries washed into Britain on a tsunami of upbeat messaging: President Hamid Karzai had come up with a bright and shiny new peace-talks plan. This time, it's going to work. But when the day was over, they had little to show for themselves except the appearance of looking wet and bedraggled. 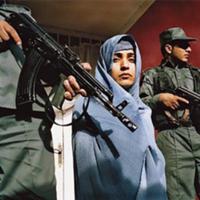 'A Woman among Warlords'

It certainly sounded like a good idea. An international trust fund to win back the loyalties of "moderate Taliban" and reintegrate weary and misguided Talban fighters was the way British Foreign Secretary David Miliband described it. For years, Karzai had embarked upon various buy-off efforts and peace-talks gambits, including a demobilization project that Canada helped bankroll back in 2005 that brought some 50,000 "insurgents" in from the cold. The government in Kabul had largely botched these schemes, but now, everything was going to be just fine. Karzai and the Saudis and the Pakistanis were issuing all sorts of hopeful hints about new signs of Taliban openness. There were gleeful "I told you so" chirrups coming from the usual opponents of the Afghan project, and joyful noises coming from the newly debt-burdened NATO capitals.

But "peace at any cost" were the words Karzai had let slip in the days before the London conference. Karzai's finance minister, Omar Zakhilwal, had gone and sounded off about looking foward to welcoming Taliban leaders into cabinet posts in Kabul and government offices right down to the district level, and it was only about $1 billion he'd be wanting to make it happen. Karzai arrived in London after holding out-of-the-way meetings in Istanbul with Iran, China, and other such freedom-loving countries, announcing that the King of Saudi Arabia himself would be pleased to convene arrangements to satisfy the Taliban high command.

It didn't help that the Taliban responded to all these enthusiasms by mounting a suicide-bomber jamboree in the streets of Kabul and declaring yet again -- as the Taliban has done like clockwork, every year since 2003, every time a peace-talks balloon get floated -- that there was nothing to negotiate except Kabul's surrender. And so it appeared, for all the world, that Karzai was prepared to negotiate exactly that.

None of this came as a shock to Afghanistan's pro-democracy movement, however. You still wouldn't know it from the world's English language press, but the backroom agenda that found its way to London last week has been percolating for years, and its re-emergence was sparking an unprecedented revolt by Afghanistan's growing civil society movement. Long before last Thursday, Afghan secularists, women's rights leaders, and democrats were frantically raising the alarm.

Only three days before the London conference, representatives from more than 200 Afghan women's rights and civil society organizations gathered at the Intercontinental Hotel in Kabul. After a day's deliberations, they released an eight-point consensus statement. The very first point: "Based on the persistent violation of the rights of women and men by the Taliban, whether when in power or after, objections were clearly and strongly expressed by all parties participating in this meeting regarding any negotiation with the Taliban."

The remaining points were equally unequivocal. The International Declaration of Human Rights is "non-negotiable." No power-sharing with criminals. No to removing the names of Taliban leaders from UN terrorist lists. Yes to Taliban fighters who desert their ranks, but no to the Taliban buy-back plan under discussion in London: "We strongly urge the international community to oppose the funding of any program that offers further support of terrorists and the Taliban. We cannot support such a plan, destined to fail, which will bring about insecurity in Afghanistan."

Reconciliation at what expense?

The London conference ended with a 3,600-word, 34-point communique that referred obliquely to Karzai's grand "reconciliation and reintegration" scheme only in passing, in two minor bullet points. The message from the Americans, largely unchanged from the George Bush days, was, more or less, whatever floats your boat, just as long as we get Al Qaida. As all the limousines left for Heathrow, Miliband found that his trust fund bag, the one Zakhilwal crowed would be filled with $1 billion, only had about $150 million in it.

For years, Ottawa has supported "Afghan-led reconciliation" as one of Canada's top six priorities in Afghanistan, but it isn't committing a penny to this "new" idea, at least not yet. Not that Canada counts for much anymore -- Prime Minister Harper hasn't had much to say about Afghanistan lately except that our soldiers will be gone next year -- but Canada was one of the only NATO countries in London to acknowledge that something else was going on.

"We are concerned that the process needs to be one that enjoys the support of Afghan society," said William Crosbie, Canada's ambassador to Afghanistan, in a sentiment obliquely echoed by Foreign Minister Lawrence Cannon. "Some Afghans, including Afghan women, have expressed concerns that reconciliation should not be at the expense of their rights, and of the gains that have been made with the new constitution," Crosbie said.

That's putting it mildly. But the spectre of an "exit strategy" built from the rubble of variously failed, flaky and sinister notions of a diplomatic bargain with the Taliban will not vanish with the London conference. Neither will Afghanistan's growing civil society movement easily back down from its resistance to a sell-out. But just as the rich countries of the world are growing "war weary," Afghanistan's young pro-democracy activists are worrying about how long they can hold on.

Myth of the moderate Taliban

"To begin with, the notion of moderate Taliban is fundamentally flawed," says Ahmad Zia Kechkenni, an Afghan-Canadian who served as a senior adviser to second-place contender Abdullah Abdullah in last year's fraud-wracked Afghan presidential elections. "While reconciliation with Taliban sympathisers who have joined them due to poverty and unemployment is possible, no peace deal can be reached with intellectually committed Taliban."

Afghan president Hamid Karzai cannot be trusted in any deal-making enterprise because his main objective at the London conference was to secure a pot of money to protect his own hide, Kechkenni told me. "The main thought behind negotiation with the Taliban is to strengthen them as a Pashtun clan. Therefore he is trying to play the ethnic card."

Whatever cards Karzai holds, and no matter who would have the winning hand at a table with the Taliban, this just isn't a game that Afghan's women's rights leaders are interested in playing.

A single delegation of Afghan women with the UN Development Fund for Women (UNIFEM) managed to find its way to London last week. Its submission ended up being the only input that Afghan women were allowed to give the conference delegates. Backed by the Afghan Women's Network and the Institute for Inclusive Security, UNIFEM expressed its "grave concern" about the way the voices of Afghan women were going unheard.

"The international community should stand behind the women of Afghanistan and elevate their voices, not barter away their rights in the name of short-term peace and stabilization,” said Wazma Frogh, an Afghan human rights activist. Said Mary Akrami, director of the Afghan Women Skills Development Centre: "Afghan women have the most to gain from peace and the most to lose from any form of reconciliation compromising women's human rights. There cannot be national security without women's security, there can be no peace when women's lives are fraught with violence, when our children can't go to schools, when we cannot step on the streets for fear of acid attacks."

For several weeks -- even in the Pashtun heartland, where the Taliban is entrenched -- progressives, socialists and pro-democratic parties have been attempting to raise the alarm of a looming sell-out, but their appeals have gone completely unnoticed by their erstwhile counterparts in the rich countries of the west.

Last month, the Awami National Party and its allies among the traditional "Red Shirt" secularist movement gathered with several civil society organizations and the Amn Tehrik peace coalition in a two-day conference. The result was a comprehensive peace plan, the "Peshawar Declaration." Among its key recommendations: "NATO and ISAF are sent to Afghanistan under UN mandate. NATO and ISAF should stay in Afghanistan until terrorism is uprooted, foreign interference in Afghanistan must be stopped and the institutions of army and police are established on solid footings."

In the tribal areas on east side of Pakistan frontier, last year's truce deals with the Taliban resulted in scores of school burnings, hundreds of murders and a reign of terror that has forced more than a million people from their homes. The Peshawar Declaration expresses support for the NATO efforts at a troop-withdrawal timetable to hand over security to Afghan authorities, but the half-dozen centrist and leftist parties that are its main authors are clear that appeasement of the Taliban will not work: "If the terrorists succeeded in Afghanistan their next target would be Pakistan. Therefore, this policy is destructive for Pakistan and should be abolished above board."

Especially in the Taliban-infested districts of Waziristan and the Northwest Frontier Province, the ordinary people want Taliban sanctuaries destroyed: "These people do not support any peace deals with the militants," the declaration asserts. "It is the [U.S.] drone attacks which they support the most."

In London, Karzai said he intends to forge ahead with the establishment of a national council for peace, reconciliation and reintegration, comprised mainly of tribal elders. The council would be given the task of organizing a massive tribal jirga, with the King of Saudi Arabia playing a key role. The Taliban will be invited. Ironically, six years ago Karzai pledged to proceed with the similarly-named action plan for peace, reconciliation and justice. Its main purpose was to banish war criminals from positions of power and develop a screening system to ensure that the country's powerful gangsters and notorious mercenaries were kept out of government jobs. Nothing much came of it.

The Afghan women's movement has been arguing for a national peace jirga for years. But UNIFEM Afghanistan, for one, has also insisted that the 2004 action plan is still the only way forward. "2001 was a very clear signal that there is no more room for conservative elements to rule in Afghanistan," says Homa Sabri, national officer-in-charge for UNIFEM Afghanistan. "I have great fears, and I am greatly confused."