Corporate investment in Canada has fallen dramatically in the past year. Some people would say it's because corporations aren't making profits. But that's not really true. 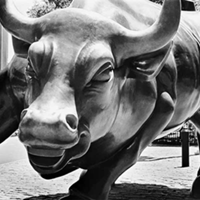 The Meltdown, Seen from Below

Canadian corporations earned $54.1 billion in operating profits in the third quarter, up 7.9 per cent from the previous quarter, reports Statistics Canada. Profits in manufacturing, mining and other non-financial industries rose 10.4 per cent to $41.7 billion and 18 out of 22 sectors reported higher profits.

Yet productive investments remain in the tank: corporate spending on buildings, machinery and equipment fell by one in the third quarter, bringing the fall in investment in the goods-and-services-producing sectors over in the past year to 14.8 per cent. That helps explain Canada's stubbornly-high unemployment, which remained at 8.5 per cent in November. And the latest StatsCan data shows Canadian industry is operating at just two-thirds of capacity.

So where are those profits going? In part, the answer is "offshore." Canadian companies continue to export massive amounts of the profits their employees produce for them, investing them in their foreign operations or in global financial markets. In spite of the recession, Canadian companies have continued to steadily increase what they spend outside Canada. Since the end of 2005, Canadian corporations' direct investments offshore rose by a third, from $452 billion to $601 billion. Their foreign financial holdings increased even more; foreign bond holdings are up by nearly half, stocks by 33.6 per cent and bank deposits -- many in cozy offshore tax havens -- have grown by three quarters.

Corporate profits are also going into the stock market. Recession? You wouldn't know from the Toronto Stock Exchange, whose share value has risen by more than 50 per cent since hitting bottom in March.

Corporations are also currently hoarding billions in profits, simply stashing them in bank accounts. The assets of Canada's chartered banks rose by about 10 per cent, from $1.76 trillion to $1.93 trillion, between the second quarter of 2008 and this year, according to Bank of Canada statistics. But the amount the banks loaned to businesses actually fell by $6 billion -- that means that hundreds of billions of dollars are just sitting in bank accounts in hopes of higher rates of return.

Another place those profits went was into the boss's pocket. Over 321,000 Canadians lost their jobs in the past year and Canadians' average wages fell. A Desjardins Securities survey found that more than 35 per cent of retirees reported a drop in their incomes in the past year while 39 per cent saw their savings decline. But Canadian Business says the majority of Canada's 100 wealthiest persons became richer this year, reaching an average net worth of $1.7 billion each, up almost 5 per cent from 2008. While total car sales were down, luxury auto sales were up by about 10 per cent in November. BMW, the world's biggest builder of luxury cars, said its global sales rose 11.5 per cent, with even bigger gains in Canada.

When the stimulus ends, then what?

So it's not that there are no profits; profits are simply being used for purposes other than investment and job creation. The folks in Canada's corporate boardrooms simply aren't interested in productive investment right now. And the federal government is in no rush to encourage them to invest or create jobs.

In fact, Stephen Harper's Conservative government seems set on winding up its stimulus plan next year. And that's a serious mistake. Because while corporate investment has slumped, government expenditure is all that's keeping the Canadian economy going! Government expenditures rose by $20 billion from the third quarter last year to this year.

Without that boost, small as it is compared to the Obama government's stimulus plan, we would be in free fall.