We may be seeing what no person in his right mind would have dared speak of just a handful of years ago. I speak of the chance that the NDP may overtake the Liberals as the government in waiting. It could happen. Indeed it may already have happened. 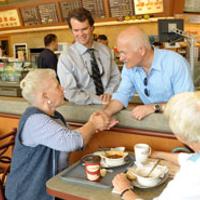 The reasons are that Michael Ignatieff is a dud and won't go quietly and the NDP is moving toward the centre.

Under Jack Layton the last three elections have show some promise for the NDP. In his first election he got 19 seats. This moved to 29 in 2006 and 37 in 2008. The fact remains that the NDP has a long way to go in order to be the opposition but with some luck and skill it could happen.

Jack Layton is a very decent guy who unfortunately reminds one of Terry-Thomas playing a used car salesman. Now, don't get me wrong, some of my best friends are used car salesman and you may believe that they are more to be trusted than, say, lawyers, politicians, broadcasters or writers. The problem is one of image. Remember poor old Gilles Duceppe and the picture of him wearing a hairnet when he visited a meat packing plant? Even though he was required to wear this, the media pilloried him as they did with Stockwell Day on a jet ski and poor old Bob Stanfield for tucking his trousers inside his cowboy boots. And who could forget Gordon Campbell's plaid shirt? Somehow Pierre Trudeau got away with wearing ridiculous garb but Trudeau managed to get away with almost everything.

Layton faces an uphill struggle and if he's to move up the ladder and pass the Grits he must do better in Quebec and Ontario, make headway in Atlantic Canada and really do well in B.C. In order to do that, the federal NDP must do better -- much better -- in rural B.C., which has become a Tory stronghold. This is where Carole James comes in.

In my judgment the mainstream media has avoided talking about the real issues in rural B.C., namely the environmental degradation of the province under the Campbell government. This appalling ruination of our heritage is catching people’s attention all over the province.

Why didn't Carole James win all of these seats last May?

Easy. Scarcely anyone who follows such things would deny that the NDP ran the most appalling campaign in living memory. I traveled most of the province speaking on the private power issue and I can confirm that. But that was then. In a few short months Campbell has, with breathtaking arrogance, demonstrated that he means to destroy our sacred salmon and the province's rivers. Whether it's the South Fraser Perimeter Road, the murderous fish farms or ruining rivers for electricity BC Hydro doesn't need and must sell at a huge loss, Campbell’s utter indifference to the environmental wreckage he wreaks is daily becoming obvious to all British Columbians.

For Layton to prosper electorally he must do something apparently impossible hitherto. He must understand our issues not just in terms of one-liners but truly and deeply. He must grasp the deep feelings that British Columbians have as they see their birthright destroyed. This means he must gamble and make the environment his big issue in B.C., something that Carole James didn't do. In May 2009 the NDP acted as if they were afraid of the environmental issues retreating instead to their age old mantras as their security blanket. Because of the NDP's reluctance to fight this province-wide multifaceted issue except in a handful of ridings, the Liberals, naturally, left it alone.

Much has changed since the last vote. Fish farms are now a federal responsibility with a hopelessly ignorant Minister of Fisheries and Oceans in charge, a minister who has obviously told the fish farmers that nothing will change. The federal government has a constitutional obligation to protect our navigable waters which include virtually all rivers to be ruined by private power projects. The federal government also has the constitutional obligation to protect our migrating salmon.

Layton must, in the minimum, do these things:

Support an instant moratorium on all new fish licenses or expansion of fish farms.

Support a time table for removing fish farms from our oceans -- whether or not they then move on land is their business.

Remove the obligation to support and shill for aquaculture from the Department of Fisheries and Oceans for the obvious reason -– to intelligent Canadians anyway -– that you can't protect wild salmon by promoting fish farms.

Lastly, he must strictly enforce the Navigable Waters Protection Act.

To do this and make it stick politically, Layton has to do something most unusual for federal politicians who venture into our western enclave. He must learn about and understand these issues, an undertaking more complicated than just memorizing slogans, something the NDP is very good at as "axe the tax" proved last may.

He must also take this issue very seriously -- not only because our people do, but because it deserves top drawer treatment. Our environment isn't a casual chip to be used in the great game of making money for money's sake. We're dealing here with a moral and ethical issue. Do we sacrifice our waters and our fish not even for our own profit but for others who have no stake in our province?

This is where Carole James comes in. I believe that the NDP campaign management team was either hopelessly incompetent or had a death wish for her. My sense of it is that James knows that and, if she is listened to, will provide the boost for Layton’s campaign that it will need. She's liked and respected, personally is a good campaigner and unlike most of her caucus, understands these issues.

This is where I hear the angry voices. What the hell has got into you, Mair? You supporting the NDP for God's sake!

I can easily answer that question and all others like it. I've belonged to political parties but have never been a "party man". I have but one motive and that's to help save our province from the ravages of clueless, not to say evil, politicians who embrace what to me are the foreign, not to say evil, tenets of the Fraser Institute. Unlike the Fraser Institute I don't believe our rivers and our fish should be privately owned. (It's interesting to note, as I did in an earlier article, that a former fellow of the Fraser Institute who supported private ownership of our rivers and our fish, also believes in consensual slavery! In fact, when he contacted the publisher and later me it was not to say he didn't support consensual slavery but that he wanted to debate it with me!)

The captive media has not raised these issues because, simply, they support Campbell. That's not a surprise since a senior editor of the Vancouver Sun was a fellow of the Fraser Institute before joining that paper which, one might infer, explains a lot. The happy fact is that people have other sources of information including The Tyee.

Layton will learn, if he listens, that the best weapon Kim Il Campbell has going for him is that people are reluctant to believe that any government could be this insensitive and indeed stupid. They are that insensitive and stupid and I offer as proof, as if proof were necessary, Mair's Axiom I, namely that you make a very serious mistake if you assume that those in power know what the hell they're doing.

It's true that Layton's party will not form the government but they might become the balance of power. If they do, British Columbians who care about our rivers, streams and the soul of our province will better represented in the House of Commons than now, though that admittedly, is not saying much.

Layton might find comfort from Mair's Axiom II, namely that you don't need to be a 10 to win in politics, you can be a three if everyone else is a two.

At the worst, Jack Layton is a three in a sea of twos and with a little self-education on the Fraser Institute-inspired ravaging of our bountiful home could turn that into a big plus both for him and for the British Columbia we love.