Dr. Chris Shaw is a professor of ophthalmology and visual sciences at the University of British Columbia. In his field of neurological disease research, he is the author of more than 200 published research articles, reviews and abstracts, and the editor of three books. 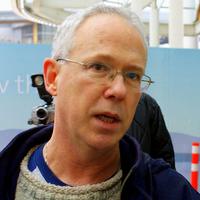 Shaw has also opposed the 2010 Games from the start -- he thinks the process is flawed from a number of points of view.

In my encounter with him on air a few years back I didn't support him. Chris has been proven to be right. One point of his correctness I wish to deal with today is the security issue -- specifically, I'd like to address the billion dollars being spent on it and the raw theft of our civil liberties.

What's the Charter for, anyway?

Now down to cases.

Canadians are being denied one of their most basic rights -- the freedom to assemble and protest. Here, in admirably unadorned english, is what the Charter of Rights and Freedoms says under the heading of "Fundamental Freedoms:"

Everyone has the following fundamental freedoms:

(a) freedom of conscience and religion;

(b) freedom of thought, belief, opinion and expression, including freedom of the press and other media of communication;

(c) freedom of peaceful assembly; and

Chris is being investigated by the authorities because of his outspoken views and I strongly suggest that after you read this, you check out the story broken by The Tyee in this article by Geoff Dembicki entitled "Police Question Friend of Olympics Critic Chris Shaw." The subheading reads: "Nursing student surprised at school by intelligence officers. Councillor calls it harassment."

It is harassment. There is nothing in Dr. Shaw's history to suggest he would ever harm anyone. Quite the opposite, in fact -- a reality which I can personally confirm by his actions at protests we have both attended.

The harassment was not, mind you, directed just towards Shaw but also towards his friend! We have here the "rat on your friends and family" technique normally associated with police states. This police behaviour (like much of the police force's behaviour these days, I'm sad to say) is absolutely unacceptable in any country that means to support civil rights.

What we have here is a gross denial of the rights belonging to Chris and to all of us. What's the point of having the right to assemble if you cannot peacefully protest?

This is not a rhetorical question because there is an answer. The security measures of these Olympics have dick-all to do with security -- and everything to do with keeping bad images and sound bytes from worldwide newspapers, radio and TV stations. It's not about citizens being "protected." Its about the sales image of the International Olympic Committee (IOC). It's reminiscent of that song we sang as kids called "Home on the Range" with its line "and ne'er shall be heard a discouraging word and the skies shall be sunny all day."

Put up a sign, police can invade your home

Vancouver's municipal government, as part of a deal with the IOC, has recently passed bylaws to effectively ban protest signs -- giving police the right to enter your home and flush them out!

Here's the news story in case you missed it.

VANCOUVER (Canadian Press) -- Vancouver's deputy mayor is defending the likely adoption of new powers that would allow the city to "swiftly" seize illegal signs during the 2010 Games.

Coun. Geoff Meggs rejects the suggestion by civil liberties groups that the new laws will stifle free speech, having repeatedly said it's instead aimed at curbing ambush marketing.

The law would impose penalties of up to $10,000 in fines and six months in jail for violations during the 2010 Games.

While it would have to be an extreme case where maximum penalties are levied, Meggs says he's supportive of the high fine alone as an "important" deterrent.

Is well-known social democrat Geoff Meggs truly ready to fight "ambush marketing" by allowing policemen to bust doors down while looking for signs that offend the IOC? The man whose provincial party, the NDP, has always instinctively supported free speech and civil rights? The man who has always stood up for the rights of people when dealing with Big Business -- which the IOC surely is? Et tu, Geoff?

What kind of democratic government would grant police the right to enter your home, look for signs that offend the IOC, seize them and fine you $10,000 per day?

There have been nasty precedents, of course, in other countries -- countries that decent nations like Canada have stood up to, often with force.

It would be horrible enough if our governments were doing this on their own, but they're doing them at the request of the IOC! This arrogant group of unaccountable jock wannabes in three-piece suits is terrorizing decent Canadians who just want to protest the Olympics where they're actually happening -- not in some "special" zone convenient to the IOC.

What these law-abiding citizens want to do is give meaning to Section 2 of the Charter of Rights and Freedoms. What's the point of even having a right that the government and the IOC can deny when they find it awkward? Being awkward is what protesting is all about!

If a right to assemble and protest exists, surely it exists on whatever public space the protesters choose. Denying that "right" is reminiscent of the fragile "rights" given under the constitution of the unlamented Soviet Union.

Here's the deal, according to the Associated Press: "Games organizers say protests will be allowed in police-controlled 'safe assembly areas' within sight of the venues, media and spectators." Get that! "Games organizers say"! The IOC has been given the right to decide where Canadians can exercise their rights and where they cannot -- and what form their protests may take!

And what about the bucks for this extravaganza?

Now, B.C. Finance Minister Colin Hansen, the man who told you B.C.'s deficit would only be $495 million (hell Rafe, he only missed it by a couple of billion) is confident. Even though Federal Minister Stockwell Day has estimated security costs will be around a billion, Hansen says that B.C.'s share will "only" be $175 million because B.C. is responsible only for the security of the Games themselves. Even if he's right, what's this immense sum of money for? What's the breakdown? What information is this based on?

What we do know is this -- taxpayers are paying a huge price for the security of 16 days of competitions many of us have never heard of before (name your favourite "luger," biathlon athlete or the "sledge" hockey player.)

After all of this, I feel that I should offer a bit of advice to Chris Shaw and all those who wish to protest (and I'm serious here.) Release balloons, carrying slogans, with just enough helium (or whatever they use) to float gently over the area you wish to protest.

I will go further. Since Wendy and I live in Lions Bay, right over the Sea-to-Sky, we'll be long gone for the Olympics -- but we'll make our little condo available for the releasing of these balloons.

Since it has turned out that the Olympics are mostly hot air, let's return the compliment in kind.