"The leader of the Opposition spoke about us versus them. To me, what she said today makes us think the us versus them is the NDP versus business." -- Rick Jeffery, Coast Forest Products Association president on NDP leader Carole James 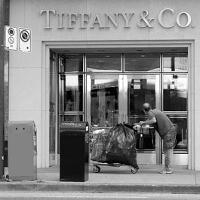 Let's be clear. Only one party has declared a class war, an "us versus them" in this province. And that's the B.C. Liberals.

Jeffery was reacting to James' call to cancel a planned corporate tax cut and instead put the $150 annual revenue towards public transit and environmental initiatives.

You'd think James was carrying a hammer and sickle red flag if you paid any attention to Jeffery's ridiculous reaction.

The Canadian Federation of Independent Business's Brian Bonney was equally scathing: "I think it shows again she doesn't fully understand that it's not governments that are going to move us out of this recession, it's business in British Columbia that's going to do that," said Bonney, a former B.C. Liberal party organizer.

Do you really believe that, Brian, after even Conservative Prime Minister Stephen Harper has bailed out business to the tune of a $59 billion deficit?

Us versus them, indeed

But let's get back to the class war, us-versus-them battle that Premier Gordon Campbell launched upon his election in 2001 and continues to this day.

B.C. has the worst child poverty in Canada for six straight years, despite our enormous wealth -- because spending on social programs was slashed early and never restored to pay for corporate tax cuts.

A 25 per cent income tax cut in 2001 was followed by a temporary sales tax increase, a permanent 50 per cent increase in Medical Service Plan premiums, higher tuition fees, carbon and fuel taxes and other user pay taxes -- meaning a dramatic increase in regressive taxes that hurt low and middle income earners while the wealthy come out ahead.

No increase in the minimum wage for eight years and labour laws changed to make it much harder to join a union -- while the legal contracts of Hospital Employees Union members and other workers were torn up.

The fire sale giveaway of B.C. Rail for $1 billion to CN Rail -- coincidentally one of the B.C. Liberal Party's biggest donors.

And don't forget former Finance Minister Carole Taylor ending the corporate capital tax on banks -- her going-away gift worth $100 million a year -- before joining the TD Bank board, as The Tyee reported.

Then there's Campbell's Harmonized Sales Tax -- the largest ever transfer of wealth from consumers to big business -- $1.9 billion a year out of your pocket and into the coffers of giant corporations who bankroll the B.C. Liberal Party.

The extra 7 per cent HST charged on everything from haircuts to home repairs, with not a penny going to needed government services.

And an 18 per cent Medical Service Premium increase over three years will also hurt ordinary taxpayers.

Don't say I'm anti-business. I've owned an incorporated, profitable company for 11 years. But that doesn't blind me to the B.C. Liberals obvious us versus them approach -- or its disastrous results that amount to a declaration of class war.