Nobody likes to waste good food. Turning perfectly good herring, sardines, anchovies, and other fish into animal feed is wasteful, because those fish can be food themselves. 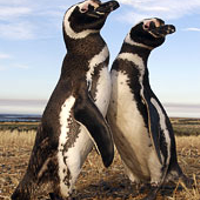 Fifty years ago, less than ten per cent of fish caught were used to make into fishmeal. Pigs and chickens were fed mostly grains and fish farming was a cottage industry.

Fast forward to the 21st century. In the throes of a perverse industrial food system that favors cheap protein and quick growth, we now feed farm animals lots of small, tasty fish.

Each year 30 million tonnes of small wild-caught fish -- one third of the global declared catch -- are ground up to feed industrially farmed fish, chicken, and pigs. In light of widespread overfishing and malnutrition, is it ethical to turn one out of every three marine fish into powdered pig feed?

We were dismayed when we heard that the Marine Stewardship Council (MSC) announced recently that the process has begun which could lead to the certification of Peruvian anchovies -- a fish which contributes to about a third of the world's fishmeal production.

The MSC is making a mistake. This issue is not whether the fishery is 'well-managed' but what we do with the fish.

Evolution of the Marine Stewardship Council

It seemed like a good idea at the time. The MSC designed a set of ecological criteria for certification, which earned approval from a wide audience of scientists around the world. However, after a roaring start, the MSC ran into problems of governance that stalled its progress. Only a few small fisheries were certified (because small-scale fisheries are more likely to be sustainable) and the MSC came to be seen as parochial.

When the MSC re-emerged under new dynamic and well-intentioned leadership in 2005, it had to catch up, and the percentage of tonnage certified became the sole criterion for success. As of the end of 2007, about seven per cent (~5.25 million tonnes) of the annual global landings of marine fisheries were MSC-certified, although not without contention from some environmental groups.

In 2006, the MSC came under even greater pressure to certify more fisheries after it teamed up with Wal-Mart, which unrealistically pledged to source all of its captured fish from the MSC by 2010. This partnership had the perverse effect of shifting the MSC's mission from certifying good fisheries to certifying big fisheries.

Why not feed people?

Peru catches five to ten million tonnes of anchovies each year -- which it exports as fishmeal, a product which is price-competitive with soymeal and other grain feeds, in part because poor countries like Peru are willing to take low prices for the fish.

Meanwhile, half of Peru's population (15 million people) lives under conditions of critical poverty and one-quarter of infants are malnourished. Anchovies could eradicate this problem and similar ones in other countries, but we currently waste this protein on animals. In fact, this led to a major campaign in 2006 involving conservationists, chefs and politicians to remake the image of the anchovy.

The goal was to develop local and export markets for human consumption of anchovy, and to make investing in freezing and canning facilities attractive so that Peru could afford to shift away from turning perfectly edible fish into fishmeal. During the week dedicated to promoting the anchovy, over 18,000 Peruvians tasted the small fish at more than 30 restaurants in Lima, the nation's capital. By late 2007, one year after the campaign began, demand for fresh, frozen and canned anchovies had grown many-fold.

But the MSC certification threatens to subvert these efforts.

If the MSC certifies the Peruvian anchovy, it will look good in terms of tonnage certified -- but this comes at an immense price. An MSC certification would open the door to certifying other fisheries for animal feed and indicate that feeding these fish to animals poses no ethical concerns.

The certification would also undermine efforts to reform salmon farming. The bulk of Peruvian anchovies go to the Norwegian-owned salmon farms in Chile, which consume more fish than they produce. Both agriculture and fish farming need to revert back to less intensive systems which require only plant-based inputs.

No fishery that catches fish for the production of animal or feed fish oil should be eco-certified. Instead, there should be efforts to celebrate these tasty fish, like Oliver Sacks' homage to herring in the New Yorker.