Is it too strong to say that the B.C. government is conspiring with corporations to carry out the assassinations of our rivers and streams? 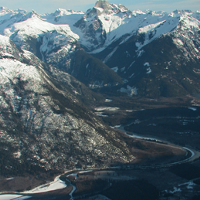 Let's take a look at what is proposed for the 125 MW Glacier/Howser hydro project, intended for an area next to the Duncan Reservoir in the West Kootenays. It includes the diversion of water from five rivers, the drilling of 16 kilometres of tunnel into a mountain, and a proposed 91.5 kilometre-long transmission line across the Purcell Mountains.

They don't even bother to put the water back into the stream beds -- instead, it is dumped it into Duncan Lake.

The impact of this entire project on wildlife looks like it will be horrendous. Certain to be adversely affected -- if not wiped out -- is the bull trout. This fish is a char, indigenous to western North America, which has virtually vanished in Alberta, has been wiped out by development in California and is threatened under the U.S. Endangered Species Act. Healthy populations of bull trout are found in both Glacier and Howser creeks.

In a Ministry of Environment publication titled 'Rare Freshwater Fish of B.C.', bull trout are described as "an indicator species of ecosystem health" -- like the canary in the mine. They are noted to be extremely sensitive to habitat degradation. They have interesting spawning habits, often choosing fairly fast moving water, and can be found in very high gradient areas of up to 30 per cent. One would have to be terminally naïve to think these fish could survive this project.

Now let's look at the big one -- Plutonic/General Electric's proposal for the stunningly beautiful Bute Inlet.

This project dams and diverts 17 rivers that drain into Bute Inlet. This is not a single development, though that's what Plutonic calls it. In fact, it's three distinct 'clusters' of hydro projects, generating a total capacity of 1027 megawatts (MW). Plutonic has been able to get this reviewed as a single project despite the obvious fact that it is not.

The size of this project takes the breath away. At its maximum production of 1027 MW, its generating capacity is greater than that of the massive Site 'C' project proposal. Because it can only produce a few months a year, its total yearly production would be less than half that of Site C, but its environmental footprint is much greater. We're looking at ruining 17 rivers, the building of 443 km of new transmission line, 267 km of permanent roads, and 142 bridges -- all to be built in one of the most beautiful and sensitive areas in our province.

This area is a wilderness refuge for many species that were once common all over the coast. The area holds all species of wild Pacific salmon, including winter and summer-run steelhead. There are also significant populations of resident rainbow, resident and sea run cutthroat, Dolly Varden and bull trout. (Dolly Varden and bull trout -- both chars -- were, for a long time, considered to be the same fish, but they are not).

Nomenclature for trout is confusing. The only "true trout" are brown trout and Atlantic salmon, who carry the prefix -salmo and are not native to these waters. Pacific salmon (oncorhynchus) are cousins, and now included are rainbow and cutthroat 'trout'. Then there's another branch of cousins -- the char (salvelinus), which includes brook trout, lake trout, Dolly Varden and bull trout).

Perhaps all of this categorization of B.C.'s fish seems arcane to the people in board rooms who are carefully and secretly plotting the death of our precious rivers, the life within them and the ecology of which they are the central part. Far from being accidental, these murders are actually premeditated. Merriam-Webster defines 'to assassinate' as "to murder ... by sudden or secret attack, often for political reasons."

Too strong? Assassination seems like the right word for me. But even if it isn't, this must be stopped. Killing our rivers cannot be tolerated by any society for any reason. This is more than an economic matter. It is spiritual. We define ourselves and are defined to the world by our wilderness and the bounties it contains.

We cannot, on our watch, allow others to destroy that precious gift which we hold in trust.