Last week I spoke of the appalling mainstream media in B.C. and how it let Premier Gordon Campbell get away with th murder of our rivers and the ecologies they support. The exception, and a major one, is Mark Hume of the Globe and Mail whose B.C. section, combined with the national edition, gives better coverage by far of B.C. affairs than does The Vancouver (Seriously West Coast) Sun, The Province and Global combined.) I need hardly add that The Tyee encourages full debate on all issues. 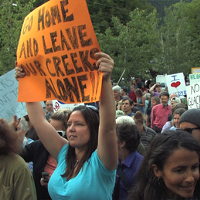 In Kaslo, a Big No to River Power

I want to make it clear that I'm not asking that the media agree with any or all of the positions I've taken. I only ask that they examine the facts plus the motives and actions of the Campbell government with the same thoroughness as, in Vaughn Palmer's case especially, they brought to the "Fast Ferry" debacle of the last NDP government.

There are three main ways the media can deceive us: By not telling the truth or using half truths at best. By not talking about the issue at all. Or by cherry picking issues and avoiding the dodgy ones. The mainstream media in B.C. does all three.

Winners (few) and losers (us)

There are winners with private power. There is short term employment to build the plants and, according to Don McInnes, CEO of General Electric-backed Plutonic Power, about two thirds of that employment comes from sources outside the area. There are jobs after the plants are built -- as many as two workers will be needed to look after the computerized outfit. One cannot, of course, forget the shareholders of the companies who make these sweetheart deals.

Let's look at the Campbell argument that we need private power to meet our own needs. This is plainly not true since the vast majority of this private power comes when we don't need it and since electricity itself in bulk cannot be stored, it will all go south. It is critical that all British Columbians know that private power has nothing to do with our power needs but has from the start been targeted for export.

I'm going to quote from a piece written by my colleague, Damien Gillis, the filmmaker, who does the Powerplay series for Save Our Rivers Society. It was written for The Campbell River Courier-Islander on the recent BCUC ruling that rubbished Campbell's energy plan.

Writing in support of the recent BCUC decision, which found that BC Hydro's private power program is not in the public interest, Gillis says, "the majority of the power these private river projects produce comes in spring -- when our public dams are full and demands at their lowest, meaning that all this private power will be for export. Only here's the kicker: since we're being suckered into paying two to three times the market rate for this power, we will have to flip it to our neighbours at a huge loss, driving up our power bills and taxes as BC Hydro goes from making a profit for the people of B.C. to being a drain on our province and economy. Our regulator [BCUC] blew the whistle on vastly exaggerated claims of our power needs by BC Hydro, which is really just enacting the government policy it is shackled to, whether it agrees or not."

This is the nub of the matter. BC Hydro is forced by Campbell to pay private power companies, on a "take or pay" basis that is likely to be two to three times what it can be exported for. That was the idea from the beginning even though we were all told that B.C. needed this power for its own use.

Don McInnes, who heads the Plutonic/General Electric partnership, has made it plain: "You'd have to be in a coma to not see where the B.C. government is going; now we need consistency of policy and certainty of timelines... An export plan is an obvious place for us to go."

What does this mean to the taxpayer?

Because nearly all private power must be exported and because BC Hydro has been forced into sweetheart "take or pay" deals at two to three times the export market value, it must now export this power at ruinous prices. With around 30 outfits up and running, BC Hydro owes them $31 billion -- if (God forbid) Bute Inlet is approved, that will add approximately $20 billion. Each new license adds to the bill. And, remember folks, BC Hydro is our company and this is your money.

But that's not all. BC Hydro has always paid a very large dividend to the government -- as high as a billion dollars one year -- and that can no longer happen for obvious seasons. That's money that builds our schools and hospitals.

And where, pray tell, is that money going?

Into the pockets of shareholders such as, in General Electric's case, Warren Buffet, for one.

BC's favour for US energy hogs

It's said by people like Guy Dauncey, president of BC Sustainable Energy Association, that the fact we can't use private energy "enables us to export green power to the U.S.A., where the new Clean Energy Act mandates that 20 per cent of electricity be from renewables by 2020, which is to our collective global environmental benefit."

Dauncey answers the obvious fact that we don't need private energy with the cheery thought that the poor old U.S. will be beneficiary, as indeed will be the world! I'm no knocker of America but before we bugger up our rivers and our world renowned power company shouldn't the United States bugger up theirs first?

Imagine the politics of this south of the line! The governor tells his legislatures and the voters that there is no need for us to make any sacrifice of our environment because B.C. is happy to do that for us!

(It's to be noted that Dauncey's organization is heavily funded by the B.C. and federal governments and the private power industry.)

Isn't it obvious that once we go down the slippery slope to being the energy source of some states, we will never be able to stop?

Besides, how the hell does destroying our precious watersheds to dump a bunch of power on the market at a huge loss to all British Columbians, without any assurances that our neighbours will shut down coal fired plants or not start up new ones, lead to any reduction of green house gases?

What's to stop Washington, just as an example, from starting up a fossil fuel plant, then re-selling our power that they got so cheaply to California?

That's the Campbell commitment to British Columbia, its people and generations to come -- an energy plan that permanently ruins our rivers for energy we can't use, forces BC Hydro to pay over twice what it's worth, then sell it to the United States for half or less of what it cost them, thus ensuring Hydro will go under.

There it is. Are the people of British Columbia ever going to wake up to what is happening here?