[Editor’s note: This story contains details surrounding the lost lives of murdered Indigenous women and girls. The information is included with respect for those who chose to share their stories.]

Participants in an annual march in Vancouver to remember murdered and missing Indigenous women today pulled down a statue of a colonial figure known for marrying an Indigenous girl when she was just 12-years-old.

As marchers drummed and sang, organizer Veronica Butler ordered onlookers to get back as people pulled on a rope attached to the statue of “Gassy” Jack Deighton, which stands on the corner of Water and Carrall streets.

With a heavy thunk, the statue toppled onto the sidewalk in part of the city where a steam clock and brick sidewalks promote the area’s colonial history.

In recent years, statues of historical figures that represent colonialism or racism have been toppled, defaced or removed in Canada, the United States and the United Kingdom. (A Tyee piece explored various approaches to removing monuments to colonial figures that symbolize past injustices.)

In Vancouver, the statue of Gassy Jack had long been pointed to as an example of a statue that should come down. Deighton is the namesake of Vancouver’s trendy and touristy Gastown neighbourhood. He’s also considered a “founding father” of the city.

But while Deighton was once celebrated as a colourful backwoods pioneer who smuggled liquor and ran a hotel in what would come to be known as Gastown, he has a darker history.

“His second wife, a 12-year-old Squamish girl named Quahail-ya, lived until she was believed to be 90. Her story has been brought forward since her death in 1948 thanks to the knowledge of women and historians from the Squamish community.”

In a notice affixed to the statue, the City of Vancouver had said staff had reached out to the Musqueam, Squamish and Tsleil-Waututh nations “to understand and co-ordinate dialogues regarding the future of Gassy Jack.”

While Jack Deighton is a historical figure, marchers connected his statue with the ongoing tragedy of Indigenous women being preyed on, abused and killed at a higher rate than non-Indigenous women in Canada.

After marchers pulled down the statue, it was slathered with red paint. Posters of missing women were affixed to the bottom of the statue. Organizers placed wooden cutouts of red dresses — a symbol of murdered and missing Indigenous women and girls — around the base of the statue.

The Downtown Eastside Women’s Memorial March happens every year on Feb. 14, a day to remember and mourn murdered and missing Indigenous women and girls and call for action. This year was the 31st year Indigenous women and their supporters had gathered at Main and Hastings streets to call attention to the issue.

The statue was toppled after the march had wound through the Downtown Eastside and Gastown. Before the march started, attendees had listened as woman after woman spoke about the mother, sister, daughter, granddaughter, niece or cousin she’d lost. The stories ranged from the 1950s to today, and some women spoke about losing multiple female family members from different generations.

Linda Kay Peters spoke about her niece, Shawnee Morita Inyallie, who went missing from Hope, B.C., in 2018. She said her family had to do much of the work of searching for Inyallie; finally, her niece’s body was found in the Fraser River, near Delta, B.C., by two fishermen.

Peters also shared a story about her mother, who had become separated from Peters’ father one night in a small mining town in northern Ontario. 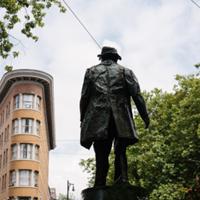 “It was common for the local miners to be driving up in town looking for Indigenous women,” Peters said. “They saw her and drove her to an isolated area, where she was raped and beaten unconscious with a tire iron, and thrown into the bush like a piece of garbage.”

Despite that ordeal, which happened in the 1950s, Peter said her 98-year-old mother is still alive today.

Janine Cardinal held a sign for her cousin, Louanna Cardinal. Cardinal and her cousin are originally from the Saddle Lake First Nation in Alberta.

“The first year I moved here, I got a call saying she’d been murdered by her boyfriend, the father of her children,” Cardinal said. “She was found naked and frozen. Today is actually his trial sentencing — and I hope she does get her justice.”

Candace West had marched in many previous Women’s Memorial Marches, but this time she held a poster for her sister, Christin West.

“I never thought I would have to do it for my sister. I’m here for her and for everyone else who has lost a loved one,” West said.

Christin West was found dead in her apartment in Prince George, B.C., on Aug. 7; Dennis Daniel Gladue has since been charged with second degree murder. Before her sister died, Candace West said, she’d told police she was being stalked and threatened.

“She called numerous times to the police and they didn’t do anything,” West said. “They have to take it more serious.”