Ashes of loved ones and pets, baby mementoes and photographs of family members are among the items city workers and police have taken from homeless people in daily street sweeps, two advocacy organizations alleged during a press conference today.

People who live on the street in the Downtown Eastside and advocates who support them have been complaining about the practice for over a year.

If items appear to be unattended or people don’t comply, the possessions are seized.

While city staff have said that only structures and abandoned belongings are taken, reporting by The Tyee showed this was not the case. People reported losing a wide range of personal belongings, including a walker and wheelchair, tents, sleeping bags, all the clothing a person owned, art pieces and art supplies. Items are often dumped or shovelled into city trucks to be carted away to the landfill.

Organizations that collect donated items for unhoused people said it was extremely frustrating to see items meant to shelter people thrown into the trash repeatedly. 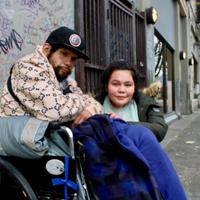 ‘Unprofessional and Disrespectful’: Walker Among Items Taken from Homeless People

Pivot and VANDU say the city needs to rescind bylaws that prohibit sheltering and vending on public space. The provincial Safe Streets Act — a law that aims to prevent aggressive panhandling — should also be rescinded, the groups say.

“During this time, both municipal and provincial governments… highlight the impact of homelessness in their communities. We have chosen to highlight how the practice where unionized workers with CUPE 1004 and the Vancouver Police Department are targeting people who rely on public space on a daily basis,” Mannoe said.

BeeLee Lee, a Downtown Eastside resident and community advocate, said what happens during the sweeps amounts to theft. Many homeless people in the Downtown Eastside are Indigenous, and the actions of city employees don’t match Vancouver’s goal of reconciliation with Indigenous people, Lee said. 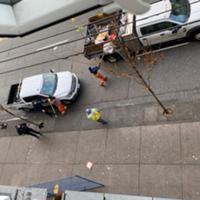 ‘The Job of the City Is to Get People Shelter, Not Take It Away’

“Each morning, people are able to witness the VPD callously stealing people’s possessions and throwing them away as if they were garbage,” Lee said.

Stacey Mcmillan previously told CBC that she lost her late mother’s ashes when city workers and police took away a suitcase that contained her remains.

Lorna Bird, the president of VANDU, said hearing about people losing the ashes of loved ones hit her hard.

“I carry my sister’s ashes on a locket, and one lady told me that they stole her mother’s ashes away, her brother’s ashes and her uncle’s ashes… they threw them into the garbage dump,” Bird said.

Another woman Bird said she had spoken to had lost a picture of her baby and a memento of her baby’s footprint during the sweeps.

“This is something that can’t be replaced,” Bird said.

Pivot and VANDU unveiled a large “invoice” to highlight the cost of the street sweeps. Mannoe said that after the two groups began their research and advocacy project this week, the sweeps weren’t carried out as frequently as before.

“We saw them three days in a row, driving away and not conducting the street sweep. But even though they did that, we still saw them take people’s belongings, including tents and tarps,” Mannoe said.

“We know that the street sweep is not a cheap fix by any means — this team typically includes up to six city workers, two uniformed police officers and heavy equipment like pickup trucks and garbage trucks.”

In response to Pivot and VANDU's claims about the street sweeps, city staff emailed The Tyee a statement saying that sanitation crews "do their utmost to ensure personal belongings aren’t inadvertently discarded as part of their work to keep sidewalks and city property passable, clean and safe for everyone."

The city says crews are trained to remove things that have been abandoned, not items that are personal belongings. Police officers accompany sanitation workers "so they can feel safe on the job," the email said, adding that city staff would like to work with community leaders on the issue.

* Story updated on Oct. 15 at 3:09 p.m. to include information from the City of Vancouver received by The Tyee via email.