Grizzly bears and human beings don’t often get along, and bears are almost always the losers. This conflict has resulted in the deaths of hundreds of grizzlies across B.C. over the past decade.

And a new conflict hotspot is a stretch of the Babine River close to a Fisheries and Oceans Canada weir that’s seen a recent rise in recreational fishing, according to BC Parks and the B.C. Conservation Officer Service.

The weir, also known as a fish counting fence, is used by DFO to tally annual numbers of sockeye, chinook and other salmon species in the Skeena watershed, an important spawning area.

Located between the southern park entrance of the Babine River Corridor Park and the DFO weir, the contested stretch of the river is home to salmon, rainbow trout, bull trout, char and other fish species in a very concentrated area. The forest service road that crosses the waterway just downriver of the fish fence gives anglers easy access.

The area about 90 kilometres north of Smithers is also home to a moderately dense population of 313 grizzly bears.

The abundance of fish attracts droves of local and international anglers, as well as bears, every summer. Despite the number of grizzlies, officials managing potential human-wildlife conflict said there hadn’t been any bear-related complaints for about six years until 2020, when they received two complaints in August and one in September, soon after the fisheries opened.

BC Parks has encouraged fishers to strictly follow the bear warnings and safety instructions on its website, noting the chance of a dangerous bear encounter in the area is “very high.”

In an emailed joint statement to The Tyee, BC Parks and the BC Conservation Officer Service said the narrow river corridor has seen few reported conflicts, despite the large number of bears and people. Last year’s increase in bear complaints, the statement said, could be classified as “negligible.”

But the potential for conflict is real, the statement added.

One of last year’s incidents saw a grizzly bear charge towards a group of fishers, while in another instance a grizzly stole a fisher’s backpack from the riverside.

Locals working in the DFO weir area have also witnessed an increase in the number and frequency of grizzly sightings lately.

“The sport fishery was open last year and there was bear-human interaction,” said Donna Macintyre, the fisheries director at the Lake Babine Nation. “As our crew worked on our tasks of counting fish, we would see an average of five to six bears every day.”

“At times we even saw 70 people on that little section of the river, which is not healthy,” she added. “If we have 70 people and it’s really hot or the water is really low, the fish will not swim up into our traps and our nets.”

Lake Babine Nation has installed an electric fence to keep grizzlies at bay when their crew is counting fish, but Mcintyre says it’s not fully effective.

“They can be quite resilient and take a zap or two without getting too affected,” she said.

Ecologist Karen Price said the weir and the concentration of fish could be attracting bears from beyond the Babine area, creating an “unnaturally high density” of grizzlies.

“Bear biologists know about the long distances bears travel for food,” she said. “We wanted to study the distances grizzlies travel to get to the Babine River, but couldn’t raise the $200,000 needed for hair snares, DNA testing and other areas of the research.”

Wildlife experts who have studied the Babine region and human-wildlife conflict fear the recent uptick in grizzly incidents is just the beginning. Additional human intrusion in the bear habitat, these experts said, could endanger the lives of grizzlies in several ways.

“The bears congregate there from miles and miles around. It is kind of a big feeding food source to stock up for hibernation for the winter,” Daust said.

Additional human access to these habitats through logging roads and other forms of development could cause the bears to retreat from the humans, affecting their ability to fish in the river, he added.

It could also increase their interactions with people or condition them to access easily available food from the discarded garbage, leftover moose kills or even fish smokehouses, which could lead to them being shot by conservation officers, Daust said.

The most effective approach to curbing negative human-bear interaction, Daust said, is to manage when and how people access the area.

“Bears get used to where people are and when they are there,” Daust said. “They can be quite tolerant of people if they can predict them.”

Adding a limit on how many fishers can access the area at any given time could help, too, he added.

“There is a lot that needs to be done,” said Price. “There have been many conflict-management plans made in the past, which are yet to be fully implemented. There are a few actions that have helped, for instance the BC Parks’ regulation on fishers cleaning their catch and not leaving bits around for the bears, or the DFO and Lake Babine Nation’s installation of the electric fence around the weir. But the issue remains.”

The statement sent on behalf of BC Parks and B.C. Conservation Officer Service said biologists and ministry staff agree that bear-human conflict at this site is a significant concern. 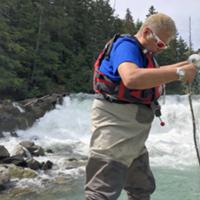 “Last year’s fishery opening highlighted the need for additional public education and ensuring that the rules established for fishing and recreating in the park are followed,” it said.

The statement also noted that an operations plan has been developed to guide BC Parks in reducing the risk of bear-human conflict and dealing with it. The plan is expected to be implemented this summer and will be evaluated yearly.

Part of the plan involves the presence of BC Parks rangers and student rangers at the fishery during its busy season in August and September. The rangers will educate the public on how to remain bear safe in the area.

As well as adding electric fences around the weir, the Lake Babine Nation has taken other steps to help protect the bears in this region, like limiting pet dogs near the weir as they’ve been known to trouble bear cubs and cause conflict.

“Our nation has four clans, two of which are the Caribou and the Bear clans, which makes them sacred,” Macintyre said.

“The caribou has already been extirpated. We cannot lose the bear too. They are far too important for our culture.”