It’s the middle of the night, and Dave Barnett is climbing the side of a steep waterfall on Grouse Mountain in North Vancouver. The beam of his headlamp illuminates the route as he ascends toward a hiker above. The man is injured — wedged between a log and the cold, rocky cliff.

Three North Shore Rescue teams have been searching in the dark for hours when Barnett and his teammate finally get close enough to speak with the man.

The rescue would be challenging. But in the midst of a pandemic, Barnett has another worry: how does he stay two metres away from the man when he has to fasten him with a harness? Or check his vitals every hour until it’s light enough out for a helicopter to fly them out?

As the number of COVID-19 cases in British Columbia climbs, search and rescue groups are asking hikers, mountain bikers and other outdoor enthusiasts to take added precautions.

“Enjoy the outdoors, but do it safely,” Barnett says. “This is no time to be taking unnecessary risks.”

Though heading for a hike in the mountains may seem like an easy way to keep your distance from others and to blow off some excess energy, there’s a real risk of losing your way, or sustaining an injury navigating the terrain. That injury could, in turn, put rescue groups at risk of exposure to COVID-19, and add unnecessary pressure on local hospitals.

Across Canada, authorities are telling people to keep their distance from one another. In Vancouver, they’ve taped off playgrounds and basketball courts, removed logs from beaches that may entice people to linger, and shut down recreational facilities. Today, the provincial government announced that it is immediately closing all provincial parks.

On Tuesday, Health Minister Adrian Dix instructed British Columbians to resist the urge to travel to their cottages or make other non-essential recreational trips despite the predicted good weather for the long weekend. “Let’s bend the curve, not bend the rules this weekend,” he said.

Doug Pope, a search manager with North Shore Rescue, says that earlier in the spring he saw a big increase in the number of people using trails in urban areas and on the lower mountain. There, at least, the risk of injury is relatively low. But people were still heading to the mountains, he says, even though access to some backcountry areas had been restricted through earlier provincial park closures.

“Enjoy the outdoors, but make extra conservative decisions right now around the type of terrain that you’re going into,” urges Pope. In most cases, that means sticking to trails on the lower mountain, below the snow line, and making sure you have the equipment you need to stay safe.

“You can still recreate in the North Shore mountain areas that remain open, but people need to respect the closures and keep proper physical distance and make very conservative decisions,” says Pope. “We don’t want to burden our search and rescue, our emergency responders, and our health-care system.”

“If you need to go for a mountain bike ride to maintain your mental health and mental sanity, I would suggest very strongly that you think very carefully about the trail you’re on. Dial it back,” he says. “Just take an easy, chill ride.”

Exercising and spending time outdoors are important for mental and physical health, says Nancy Sin, an assistant professor of psychology at the University of British Columbia. Spending time in nature, in particular, can help reduce stress and improve your mood. Sin and colleague Anita DeLongis, who are using surveys and daily diaries to study how people are coping with COVID-19, expect time spent outdoors to be related to better mental health.

But as hospitals in B.C. prepare for a potential surge in COVID-19 cases, the key is to spend time in nature in a way that’s unlikely to require a search and rescue call, or a visit to the hospital.

“We would encourage everyone to get outside, be active, but to do so in a way that you’re not likely to cause yourself significant injury that might land you in one of those valuable hospital beds,” says Kathleen Ross, the president of Doctors of BC, a voluntary association representing doctors and medical students.

Hospitals are preparing operating rooms for COVID-19 patients who require a ventilator. “There simply won’t be space,” says Ross, for non-urgent surgeries, including for some broken bones. “You may not get the same care that you would have a few weeks ago,” she says.

So far, North Shore Rescue hasn’t seen a sudden increase in the number of people needing to be rescued. But the team is concerned that rescue operations could put its members at risk, particularly given the limited access to N95 masks and other personal protective equipment.

It’s especially important not to be deceived by the seemingly pleasant weather.

Last month — only a couple of days after the World Health Organization declared the COVID-19 outbreak a pandemic — North Shore Rescue was called in to help another hiker who was stuck with his young daughter on Eagle Bluffs, a popular lookout. The area, which falls within the southern boundary of Cypress Provincial Park, is now closed as a result of Wednesday’s announcement.

Pope led the search team, geared up with crampons and poles to handle the slippery terrain they knew they would encounter. Just as they were getting close, they got a call about another pair of hikers stuck in the same area. Then, as they started to plan how they would rescue both groups, the team came across yet another man stuck on the snow.

Suddenly they had four adults and a young child to rescue.

“It took quite a long time, as you might imagine,” Pope says. “One thing that we find this time of year is people are looking up hikes online and seeing pictures of people in spandex shorts up on mountain summits in the sunshine doing selfies. But that’s not what you’ll find when you get up there. It’s full on winter still.”

In the summer a hike may take four hours, but add in winter conditions and suddenly it takes 12 hours and requires mountaineering skills and equipment, he says.

Even in relatively good conditions, the terrain on a lot of the North Shore mountains, including Grouse, is steep and challenging, especially if you find yourself off of a marked trail.

“It is virtually impossible to traverse across from one trail to another except for a couple places and then only for very experienced people,” Barnett says of the area on Grouse where he and his teammate found the lost hiker last month. 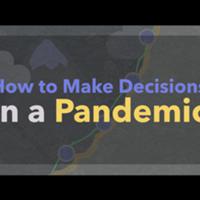 How to Make Decisions in a Pandemic: A Tyee Video

The log that saved the hiker from plummeting farther down the gully had left him bruised, with potentially broken ribs and a possible concussion. After hours stuck against the cold cliff, hypothermia was becoming a concern.

As Barnett closed in on the man, he asked him questions to gauge whether he had symptoms of COVID-19. Barnett asked the hiker to keep his head away whenever he spoke. But when Barnett moved in to slip a harness on the injured man, and slowly lowered him to his teammate below, keeping two metres between them just wasn’t possible.

The three made their way to a warmer area across the creek. Barnett and his teammate administered first aid, and gave the hiker food and water, and a jacket, heat vest and sleeping bag to keep warm. They checked his vitals regularly to make sure he remained stable, all the while taking precautions against COVID-19 exposure.

When morning came, they got themselves in place for the helicopter, which, over two trips, hoisted all three out of the area by long-line.

Not all rescues are so dramatic, but even on the more straightforward calls distancing can be a challenge.