Alberta’s $2.5-million public inquiry into “anti-Alberta energy campaigns” is giving serious weight to an obscure report that suggests U.S. environmental groups opposed to oil and gas fracking are being funded and exploited by Russia.

Russian Attempts to Influence U.S. Domestic Energy Markets by Exploiting Social Media was produced by the U.S. House of Representatives Committee on Science, Space and Technology, which at the time was led by a climate change-denying Republican from Texas named Lamar Smith. Upon its release in 2018, Democratic Congressman Raúl Grijalva described the report as “another round of unsupported conspiracy theories,” and it received little traction.

Now the report is officially required reading for Alberta’s inquiry, explicitly included in its terms of reference.

Why would that be? Answers were not forthcoming from Inquiry Commissioner Steve Allan, who didn’t respond to The Tyee’s interview request.

“There is very little the commissioner can share with the media at this time that is not contained on this website,” reads the Alberta Inquiry website. The commission’s terms of reference also explain that “As part of the inquiry, the commissioner shall examine the work completed by other investigations in other jurisdictions into similar activities or alleged activities.”

A New York-based journalist who wrote an article about the Republican-produced report was surprised Alberta is paying attention to its claims of Russian intrigue.

“That is unexpected,” said John Timmer, senior science editor for the media outlet Ars Technica. The report “didn’t pick up very wide coverage perhaps because it was rather strange to begin with... It just didn’t really hold up to a critical analysis very well.”

“It’s just a bizarre compilation of allegations that feeds a conspiracy theory,” said Devon Page, the executive director of Ecojustice, about the report’s inclusion in the Alberta inquiry’s terms of reference.

A legal challenge filed by Ecojustice this week accuses Alberta Premier Jason Kenney of weaponizing a public inquiry against environmental groups in order to silence their criticisms of the oil sands.

“It’s really designed to feed conspiracy theories,” said Page. “It is entirely a political exercise to target, silence and intimate.”

To better understand the Russian-blaming U.S. report now being examined in Alberta, it helps to know a bit about the Republican who helped create it. Before his retirement in 2018, Lamar Smith was a major beneficiary of oil and gas donations.

The sector was the Texas congressman’s biggest single contributor, giving him $764,000 over the course of his career, including large donations from companies like Valero Energy, Koch Industries and Exxon Mobil.

Smith made a name for himself attacking the science of global temperature rise. The Los Angeles Times called him “the most obnoxious climate change denier in Congress,” explaining, “As chairman of the science committee, Smith waged a war on scientists, research administrators and even state officials whose offense was to establish the human role in climate change.”

In 2017, with the U.S. political and media establishment obsessing over Russian interference in the previous year’s election, Smith weighed in with his own theory. The true Russian interference, he claimed in a letter to the Department of Treasury, was taking place in the U.S. fossil fuel industry.

“The Committee on Science, Space and Technology is conducting oversight of what appears to be a concerted effort by foreign entities to funnel millions of dollars through various non-profits to influence the U.S. energy market,” Smith wrote.

“It is easy to see the benefit to Russia and Gazprom that would result from a reduction in the U.S. level of drilling and fracking — a position advocated for by numerous environmental groups in the U.S.”

Like any alluring conspiracy theory, there was a semblance of truth to what Smith was saying. Hillary Clinton had apparently talked about “phony environmental groups” funded by Russia in a speech made public by Wikileaks.

“I would also note that no less than then-NATO Secretary General Anders Fogh Rasmussen spoke about Russian efforts to undermine the energy industry in the West,” wrote Kavi Bal, a spokesperson for the Alberta Ministry of Energy, to The Tyee.

Bal didn’t add that Greenpeace had strongly dismissed Rasmussen’s comments. “The idea we’re puppets of Putin is so preposterous that you have to wonder what they’re smoking over at NATO HQ,” a spokesperson for the environmental group explained to the Telegraph. “Mr. Rasmussen should spend less time dreaming up conspiracy theories and more time on the facts.”

And Clinton’s alleged leaked quotes don’t specify whether she’s referring to environmental groups in Europe or the U.S. or who those groups even are.

“It’s a theory,” an aide who worked with Smith’s science committee acknowledged to Politico, “but the reasoning behind it makes sense.”

Upon closer examination, though, it appears that the majority of evidence for this theory was suspect. “If you read through Smith’s letter, footnotes and all, and if you do a little digging, you will quickly find that almost all of the congressman’s central allegations lead back to a single source with scant credibility,” wrote Jimmy Tobias in Pacific Standard.

That single source was a group known as the Environmental Policy Alliance, whose backer Richard Berman was recorded in 2014 telling a room of oil and gas executives that they are engaged in “an endless war” with environmentalists and that “you can either win ugly or lose pretty.”

A 2015 report from Berman’s group entitled “From Russia With Love?” presents information suggesting that Russian oligarchs are tied to efforts to support and fund U.S. environmental groups, an allegation one environmental group described as “completely false and irresponsible.”

So to sum up: Lamar Smith, a climate-denying Republican from Texas, embraced a conspiracy theory floated by oil and gas operative Richard Berman, and then asked the U.S. House science committee to investigate that theory. The committee’s report, which came out in 2018, didn’t make an especially convincing case.

Though there was indeed evidence that Russians created anti-fracking social media posts in the U.S. in the lead-up to the 2016 election, “energy was just one of the many topics that the Russian groups identified as a political fault line within the U.S., and they attempted to exploit it by inflaming tensions rather than arguing for any specific policy,” Timmer wrote at the time.

“Based on the evidence it really looks like this was an extremely low-level campaign to foment arguments in the U.S. populace and there weren’t any clear goals for Russia to benefit from disrupting U.S. fossil fuel production,” Timmer said recently.

Rather than a smoking gun revelation of Russian influence over anti-fracking activism, Timmer said it makes much more sense to view the report as part of Smith’s long history of “denigrating environmental groups” and “promoting fringe views and conspiracy theories about the scientific status of climate change.”

As the Alberta commission scans for villains working to deprive its fossil fuels industry of pipelines and profits, the Russians so far play second fiddle to a longer persisting conspiracy theory, given a platform for years by conservative politicians and oil executives in Canada.

It’s that climate change activists are being funded by shadowy U.S. charities like the Rockefeller Brothers Fund in order to sabotage Alberta’s oil sands and benefit America’s oil industry.

While that theory has been debunked in detail, Bal, the Alberta energy ministry spokesperson, invoked it again on Thursday to attack Ecojustice’s new legal challenge. 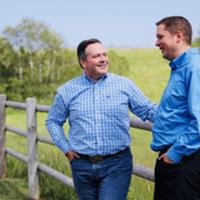 Alberta Created a Way to Help Fossil Fuel Workers. Kenney Is Wrecking It

“A foreign-funded activist group opposing the inquiry on foreign-funded attacks on Alberta’s oil & gas workers is not surprising and speaks for itself,” Bal wrote in an email.

Bal’s line of attack, like the 2018 report and the current Alberta investigation, all serve to divert public attention from legitimate and pressing concerns raised by environmentalists, say critics.

“The inquiry has been called not to address a matter of pressing public interest, but to justify a predetermined intent to harm the reputations, economic viability, and freedom of expression of certain organizations who have opposed the Government of Alberta’s position with respect to oil and gas development,” argues the legal challenge filed by Ecojustice.

Page accuses Kenney of creating a dangerous distraction at a time when we need to be throwing our full political and economic weight into fighting the climate emergency.

“It should be evident to every Canadian that Canadian governments need to stop attacking people and each other and start working together to fight climate change,” Page said. “We’ve got to stop wasting this kind of time and millions of dollars and start with the transition off fossil fuels.”