Tom Beaver is used to getting rude comments on social media.

But not the viciousness and violent threats he says are flooding his accounts this federal election.

Beaver has been targeted for leading, this year and in 2015, campaigns urging people to vote “anybody but Conservative” because of the Harper government’s cuts to veterans’ supports.

Beaver, who joined the 1st Battalion Royal Canadian Regiment in 1979 and retired from the military in 1989, is no shrinking violet.* He understands elections stir up emotions and people act badly on the Internet “because they can hide behind a screen.” Over his time advocating for veterans, he’s done plenty of arguing in person and online, and not always politely.

“I have been threatened with death, bodily harm and property damage, called a traitor, told I was turning my back on veterans.”

He’s alerted the police, forwarding 10 of the most hateful messages he’s received to the RCMP detachment near his home in New Brunswick.

Beaver says the RCMP told him they have “put a watch” on those threatening him online.

About 20 people are sending him messages so vitriolic they concern him, Beaver says, and he knows their names. Two are from the U.S., he says, most of the rest from Alberta.

“I’ll punch you out,” says one of over a dozen hate-filled messages The Tyee has seen. Another warns, “Don’t plan on leaving unbloodied.”

Many of the messages to Beaver, who is white, include diatribes against immigrants and LGBTQ people. “A disgrace to the uniform,” one calls Beaver.

“I find this election is getting really down and dirty,” Beaver says. “This is the worst I’ve ever seen it. When was the last time you’ve seen our prime minister had to wear a bulletproof vest?”

Beaver believes many of the people attacking him online have post-traumatic stress disorder — a condition he shares. The disorder makes him want to stay away from people, he says. The barrage of hate hasn’t made things any easier. 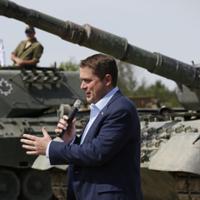 Beaver, who is 57, served as a peacekeeper during his time in the Canadian Army, entering as a private and leaving with the rank of master corporal.* At one point he contracted a virus that left him paralyzed for a year, he says.

In January his wife died. He spends most of his time at home with his service dog Lucy, working to get financial and medical support for veterans and helping with a website called Veterans against Conservatives. Sometimes his advocacy takes him to Ottawa, where he “hides in a hotel room” when not on Parliament Hill.

Beaver has praised the Trudeau government for carrying through with almost all its pledges to veterans made in 2015. People have every right to disagree with his politics, he says. But he urges them to take a positive approach.

“Get involved. Don’t try and hurt someone. Your efforts will be better served by getting involved, not by trying to belittle someone.”

The most ominous messages Beaver gets tell him to be careful and watch his back. Is he tempted to satisfy his attackers by going silent?

“I’m not going to stop what I’m doing,” he vows. “After what the Conservatives did to the veterans, I don’t care.”