The British Columbia government has to step in and regulate gas prices to protect consumers from gouging, said Marc Eliesen, a former deputy energy minister in Ontario and Manitoba and former CEO of BC Hydro.

The B.C. Utilities Commission’s recent report on gas prices confirms consumers are paying $500 million a year too much for gasoline, said Eliesen.

The utilities commission’s inquiry into gasoline and diesel prices, ordered by Premier John Horgan last spring, compared prices in B.C. and the U.S. Pacific Northwest. It looked at taxes, refining and marketing costs, and other factors.

Its report, released just before the Labour Day weekend, found “an unexplained difference in wholesale price of approximately 13 cents per litre between Metro Vancouver and the U.S. Pacific Northwest.”

“The higher price differential cannot be explained by economic theory or justified by known factors in the market,” it concluded. “Higher retail margins are skewed toward the south coast and specifically the City of Vancouver.”

Eliesen and economist Robyn Allan, former CEO of the Insurance Corporation of BC, submitted the only consumer-oriented report to the commission.

They argued that price gouging had been rampant since 2015 and that regulations were needed to end it.

“We were pleasantly surprised by the report,” said Eliesen. “The commission basically accepted most of our arguments.”

Although the commission described the price differential as “unexplained,” Eliesen said that’s just another word for gouging.

“That’s the only way to stop price gouging, by intervening and regulating,” said Eliesen. “Without that change, consumers will continue to be exploited in this market.”

The commission’s report noted that four companies (Parkland, Suncor, Imperial Oil and Shell) “control approximately 90 per cent of the market in Southern B.C. Therefore, the wholesale gasoline and diesel market is an oligopoly.”

These companies control all 15 primary storage terminals in the province “and, along with Federated Co-op Limited, control all the Bulk Terminals.” (Bulk terminals handle smaller volumes of fuel supplied by truck.)

The companies’ dominance makes it effectively impossible for competitors to enter the market, the report found. “This oligopolistic wholesale market has the characteristics of a natural monopoly,” it said.

Contrary to claims made by Alberta politicians, the commission found the volume of refined products moving on the Trans Mountain pipeline had no effect on prices.

And it noted the higher relative prices continued even as demand declined after peaking in 2016. The demand decline is expected to continue.

“All else being equal, economic theory dictates that declining demand should exert downward pressure on prices,” explained the commission’s report. But that hasn’t happened in the Vancouver marketplace. 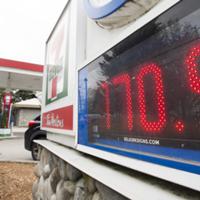 Eight of the 11 intervenors that presented evidence to the commission represented the oil and gas industry.

They uniformly argued the market was highly competitive and that no gouging was taking effect.

In its final argument, Parkland, which operates a Burnaby refinery that supplies the Lower Mainland, argued that “the evidence demonstrates that there are functioning competitive wholesale and retail markets in B.C., and that the price changes seen since 2015 are the product of taxes, crude prices and market forces.”

Bruce Ralston, the minister of jobs, trade and technology, responded to the report. “Too often, people feel like they’ve been ripped off when they fill up at the gas station,” he said.

But the government has not said if it will take any action to regulate prices.