Clarmont is Teme-Augama Anishnabai on her father’s side. For many years she wanted nothing to do with federal elections, feeling that they were irrelevant in terms of the issues she and her Northern Ontario community faced.

At 41, the only federal election she has voted in was the last one.

Now she sees the value, and thinks everyone should participate.

“When you don’t see yourself reflected in the system at all, it’s hard to feel motivated to participate,” Clarmont said. “But at this point I think we need to be in there making ourselves heard and impacting the outcome.”

Clarmont, who has lived in B.C. for 14 years, is a director at the Victoria Native Friendship Centre. In June she took part in a panel discussion on strategies for calling out racism in the coming election campaign and increasing the participation of voters who have been marginalized. Planning is under way for a second event in August.

It’s a discussion with implications for individual Canadians, but also candidates and parties. In some cases, what’s needed is a commitment to keep the conversation inclusive. But deep structural changes are also needed.

For Indigenous people in particular, distrust of the federal government runs deep for good reasons.

“It can be really challenging to step into a space and participate in a governance structure that literally has legislation that’s based on you because of your race,” Clarmont said.

The Indian Act, first passed in 1876 and amended many times since, governs the relationship between Indigenous individuals, bands and the federal government. It defines who gets status as “Indian” and sets up the reserve system.

“When you live in a country that has race-based legislation, it’s hard to feel there’s a space for you to step into and influence that structure,” said Clarmont. “It feels overwhelming even.”

She sees the role the federal government plays and the importance of political structures that allow people’s voices to be heard as decisions are made.

But the idea of participating and supporting a party was “really challenging,” she said.

“If I voted in an election, does that mean I support that party, and if that party makes decisions, like the recent decision on the Trans Mountain pipeline, then am I saying I support those decisions?”

Many Indigenous people don’t believe any of the mainstream parties reflect their interests or perspectives, she said.

“You can end up feeling like you’re supporting things you don’t want to support. If I participate in that system, am I agreeing to the oppressive nature of the colonial government system?”

Those feelings of distrust and disaffection are reflected in relatively low voting participation by Indigenous people. Elections Canada figures show that people living on reserves were less likely to vote in 2015 than others, though the gap — about seven per cent — was narrower than in previous elections. The overall turnout was 68.5 per cent, the highest it had been for any Canadian election since 1993.

Past studies have shown that others who have been less likely to vote — who may not feel fully part of the system — include recent immigrants, younger people, and those with lower incomes.

Canadian elections have been unwelcoming and even exclusionary for many people for a long time, with various parties “running on racism” over the years, says University of Victoria history professor Penny Bryden.

She gave examples ranging from anti-Chinese legislation in British Columbia in the 1870s — Chinese-Canadians weren’t allowed to vote in B.C. provincial elections until 1949 — up to the “barbaric practices” hotline the Conservatives proposed in the 2015 election.

Low points in between included then prime minister Wilfrid Laurier, a Liberal, signing a 1911 order-in-council intended to ban immigration by people who were black; the influential role of the Ku Klux Klan in the 1929 Saskatchewan provincial election; and post-war opposition among all parties to open immigration policies.

It wasn’t until the 1960s that First Nations people living on reserve got to vote.

“Having been excluded from the franchise for so long, the low level of participation is a reflection of those long decades of exclusion,” Bryden said. “You don’t immediately say ‘here’s the vote’ and expect everybody to embrace it, and so as a result we’ve got uneven levels of participation.”

Clarmont said the recent evolution in the broader Canadian culture had encouraged her to participate by voting.

“I feel like the conversation of reconciliation has really helped push me more into that space,” she said. “I feel like people in Canada, citizens, do want to hear a balanced perspective. They do want to hear the reality of the lived experience of Indigenous people, and so it’s a more welcoming and inviting space than it was maybe 10 years ago.”

Lisa Gunderson is a psychological consultant who gives workshops on racial bias. She and her family immigrated to Canada from the United States eight years ago.

Canada is vulnerable to the same intolerance that gave rise to Donald Trump in the U.S. and the anti-Europe Brexit vote in the United Kingdom, she said.

She cited a recent Ekos poll that showed an increase in negative attitudes toward immigration by visible minorities or racialized people.

The poll, released in April, found that opposition to immigration overall was basically unchanged, and below levels of a decade ago.

“While general opposition to immigration is not that different over the past several years, the incidence of those thinking there are too many visible minorities is up significantly,” Ekos reported. “Racial discrimination is now an equally important factor in views about immigration than the broader issue of immigration.”

It also noted that the issue was becoming increasingly polarized along partisan lines, with Conservative supporters more than four times as likely as Liberals to say Canada admits too many immigrants who are members of racialized groups.

“Our research suggests that [attitudes about immigration] are sorting voter choices in ways that we have never seen before in Canada.”

“That is kind of a theme that we see in the U.S., that we see over in Europe, that as especially countries that have been majority white, as they are becoming majority minorities or black/brown, we’re seeing this kind of rise coming up,” Gunderson said. It’s interesting and a concern, she added.

Gunderson and other organizers are calling on candidates and parties to stick to issues and avoid the kind of “dogwhistle politics” that prey on people’s fears.

“We can disagree on political issues, on policies etc., and we don’t need to add into it any kind of racial piece to that,” she said. “Using certain trigger phrases or trigger words, like being ‘real Canadians’ or something like that, we don’t want to do that... It has real consequences.”

Dog whistle politics use phrases or messages that, while not overtly racist, promote fear of others. The Conservatives’ barbaric practices hotline proposal didn’t mention Muslims, but was widely considered to be an appeal to anti-Muslim voters.

“‘More jobs for our people at home.’ That means something,” she said. “There are words written between the lines when people say things like that.”

But sometimes the issue is what’s not said, and who is ignored.

“Like talking about creating an energy corridor through Canada but not including an Indigenous perspective in that conversation. That’s racism,” she said.

“Having platforms that have to do with the environment and land use, and not including Indigenous voice, that’s just not a place that we’re willing to say is acceptable any more. We need to have balanced conversations and perspective.”

Gunderson said politicians and their strategists have to take a hard look at who they are and aren’t attracting.

“We really want people who are running to not only look at their opponents and their own policies... but also who’s in the party and who are they attracting to come and join the party.”

In many parties, youth, recent immigrants and racialized people are underrepresented, she said.

“You need to look at yourself, and look at your campaign, and ask yourself, ‘Is this welcoming?... Who’s missing from the table?’”

“If you don’t have certain voices at the table, policies can occur and you may be missing something critical.”

‘We’re all part of the system’

The solutions could be as simple as making sure the next campaign event is in a neighbourhood — or somebody’s home — where you’ll reach people who had been left out, she said.

Canadians may be less loud in their racism than some Americans, Gunderson said. But, as others have observed, being “nice” isn’t the same as being anti-racist, she said.

And perspectives on Canadian racism vary depending on who you ask.

“Within my own community, I’m of African descent, so the African-Canadian community, we can see it as pretty overt. If I talk to some of my European descent friends, they don’t.”

Even well intentioned laws have unintended political consequences. Gunderson gave the example of a recent B.C. bill that bans candidates from taking political donations from people outside the province.

“On the face of that, that is great,” she said. But what about someone like her, she asks, who is new to the province and might want to get involved in politics?

“It’s just my husband and myself. And, typically, if you’re going to run for something, who are the first set of people you’re going to ask for money from? Friends and family.”

For her, all those people are outside the province and are forbidden from donating. “I can’t take $1 from any of them,” she said, “it becomes a barrier.”

Nor could groups on the east coast dedicated to supporting African-Canadians in politics provide financial support, Gunderson said. The result is that people who have been in B.C. for a long time get an advantage.

If a recent immigrant or racialized person had been in the room when the policy was developed, perhaps a middle ground could have been found where friends and family outside the province could give a limited amount, she said.

“You’ve made a barrier without intentionally doing so,” she said. “That’s just one example of how important it is to have voices at the table.” 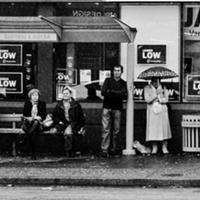 “What I’m interested in is more like a partnership,” Gunderson said. “What is it going to take for the dominant group to understand it is in their survival [interest] to understand us? What is that dynamic going to have to be?”

Women got the vote because men voted for it, and same-sex couples can marry because heterosexuals voted for it, she observed. Addressing racism in elections needs similar broad support.

“We can do little pieces, but big chunks of this can’t go forward unless white people are going to talk to their people.”

“We’re all part of the system, so you’re either helping to dismantle it, or you’re helping it to keep going.”