Drivers are paying high gas prices in Greater Vancouver because a lack of competition has created a market “ripe for price gouging,” says a report released Thursday.

The report to the BC Utility Commission’s inquiry into gas and diesel prices in the region says media commentary blaming price spikes on “chronic shortages” or lack of pipeline capacity appears “designed to serve the price gouging behaviour of suppliers rather than shed light on actual market factors and conditions.”

Economist Robyn Allan, former CEO of the Insurance Corporation of BC, and Marc Eliesen, former chairman and CEO of BC Hydro and a former director of Suncor, say they wrote the 47-page report to clear the air on the contentious subject.

“There has been so much misinformation circulated in the public arena about the factors responsible for the excessively high gasoline and diesel prices in British Columbia that we knew a detailed and researched report addressing the false narratives and setting the record straight would be necessary,” Eliesen told The Tyee.

The report found that just four suppliers — Suncor, Imperial, Shell and Parkland — control the gas market in the Lower Mainland.

The result is “a highly concentrated market,” the report found, and the four are likely responsible for “excessive and volatile” prices since 2015.

“This report finds that an absence of competition among refined product suppliers has caused the market to fail,” the report says. “Price is not a function of cost plus a reasonable return on investment as should exist in a functioning market. Price is a function of what the market can bear. This is price gouging.”

Allan and Eliesen recommend the BC Utilities Commission be given the power to regulate gas and diesel prices in B.C. to ensure reasonable returns for producers and retailers and fair prices for consumers.

“The commission is the proper agency… to implement and administer a regulatory regime for gasoline and diesel prices in British Columbia and ensure that if and when prices rise, there are sound cost-based reasons for doing so,” they conclude. All four Atlantic provinces regulate the price of gasoline.

The report warns the problem “exacerbates income inequality and acts as a drag on the performance of B.C.’s economy.”

About one-third comes from two domestic refiners (Parkland and Husky, which serves northern B.C.), one-third is shipped on the Trans Mountain pipeline from Alberta refiners, and the remainder comes by rail and barges.

Allan and Eliesen found no evidence of chronic shortages in the Vancouver marketplace or lack of capacity on the Trans Mountain pipeline.

In March, as gas prices soared in the region, the pipeline had unused capacity that could have carried 97,000 barrels a day if the products were needed, the report says.

Yet many commentators and Alberta columnists have linked high prices in the region to the fact that the Trans Mountain pipeline expansion hasn’t proceeded.

Allan and Eliesen note none of the companies have indicated difficulty reaching the market during the recent period of high prices, or said they wanted greater capacity on the Trans Mountain pipeline.

And the pipeline expansion will not increase refined product shipments to the Vancouver region, contrary to claims made by Alberta Premier Jason Kenney and other commentators.

Last May, Kenney claimed that the expansion would lower gasoline prices in the Lower Mainland.

Yet as Allan and Eliesen note, Trans Mountain told the National Energy Board in 2013 “that refined product shipments will not increase” as the project is designed to increase exports.

The report found that refining profits have jumped in recent years across Canada, and the Vancouver area has witnessed the highest increases.

Refining and marketing margins in Vancouver averaged 18.4 cents a litre between 2000 and 2014, the report said. For the first eight months of 2015, the margins jumped to 33.2 cents a litre.

“British Columbians were charged almost 15 cents a litre more for gasoline at the pumps than crude feedstock costs suggest they should have been charged based on 15 years of market data.” 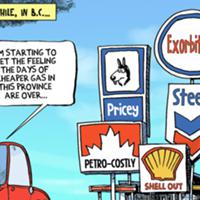 Eliesen and Allan said there are no market forces or cost factors that justify the “the excessive refinery and marketing margins.”

Eliesen said that up until 2014, retail gas and diesel prices reflected the cost of crude oil. That changed when oil prices fell sharply.

“There has been a disconnect between the historical relationship of crude oil prices to pump prices, with refiners and marketers taking the lion’s share of the windfall gain for themselves rather than passing it on to consumers and businesses,” he said.

The report concluded that market failure has resulted in high costs not only for B.C. drivers, but for businesses that move goods by road.

“Refinery and marketing margins in B.C. have broken records in absolute and proportional terms.,” the report concludes. “The relatively few suppliers in the market have wielded their power and engaged in unfair pricing practices.”