The province launched a similar program in 2017 that was panned by experts — including the head of the Canada Mortgage and Housing Corp., which will administer the new federal program.

There are, however, some key differences between the two approaches.

The B.C. program, launched a few months ahead of a provincial election, provided loans of up to $37,500 to first-time homebuyers to help them afford a downpayment on homes worth up to $750,000. Buyers wouldn’t be charged interest or have to make payments on the loans for five years.

Critics worried the program would further inflame an already overheated market. One of them was Evan Siddall, president and CEO of CMHC, who said little about the program publicly but was scathing in private emails to B.C. officials and others.

“Programs that support demand in supply constrained markets, like Vancouver, serve primarily to increase prices and make the affordability problem worse,” he said in an email that The Tyee received through a freedom of information request.

“We encourage all aspiring homebuyers to make informed and responsible home-buying decisions that don’t put their financial futures at risk, especially in a market that is showing signs of overvaluation,” he wrote, noting that high household debt was a top threat to the country’s financial stability.

In another email he wrote, “You will know we are holding our noses firmly on this and I would not want any other [provinces and territories] to be misled into thinking this ill-advised program represents good public policy.”

He said the B.C. government’s claim that the program would make home ownership more affordable for thousands of British Columbians was wrong. “I am joined by a loud chorus of economists in insisting that it will do the exact opposite,” he wrote.

So what does Siddall think of the new federal program? He was unavailable for an interview.

On its surface, the First-Time Home Buyer Incentive the federal government announced last week appears similar to the B.C. program.

It will provide buyers who qualify with funding of 10 per cent towards a newly built home and five per cent for an existing one. The idea, according to budget documents, is to “give eligible first-time home buyers the ability to lower their borrowing costs by sharing the cost of buying a home with CMHC.”

One difference is that the federal program will be income-tested, open to households making at least $50,000 a year and less than $120,000.

Also, the incentive amount plus their insured mortgage will be capped at four times their annual income. That means the purchase price for homes would be in the range of $200,000 to $480,000.

Few homes are available in that range in Metro Vancouver, but the government suggests the program could encourage developers to create housing that could be sold at prices where people would be able to qualify.

Another key difference with the B.C. program is that under the federal program, a buyer won’t have to repay the loan until they sell their home. The CMHC will have an ownership stake and would be entitled to a percentage of the sale price based on the size of the original loan.

With the B.C. program, debt that buyers incurred would be interest-free for five years, but after that they would need to start paying it back and it would add to their total debt.

Tom Davidoff, the director of the Centre for Urban Economics and Real Estate at the University of British Columbia, said he thinks the federal program is much better than its provincial predecessor.

“People have complained you’re not going to get a lot of uptake in Vancouver and Toronto, but in a way that’s the point,” he said. “If this is concentrated in markets that were sort of collateral damage in the stress test, then that’s a good thing.”

In a high-priced market like Vancouver the new program will do little to increase the number of people who can afford to buy homes, Davidoff said. “Where it helps a market like Vancouver is in the longer run. I think a demonstration project of an equity-sharing product is a bigger deal,” he said. 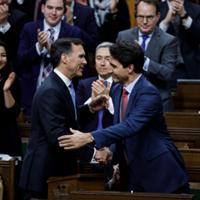 Trudeau’s New Budget and the Cult of Home Ownership

“If you extended this to higher incomes and larger property values, this could be a pretty interesting process for people who realistically aren’t going to get to 10 per cent down or even five per cent down. This equity sharing is possibly an important form of ownership.”

The B.C. program proved unpopular and was cancelled in 2018. B.C. officials had expected 42,000 buyers to take advantage of the program over three years, but in its first year only 3,000 enrolled.

The federal program is budgeted at $1.25 billion over three years and should be launched by September 2019, around the time the federal election campaign period will begin.