Prepare yourselves for a Cree lesson.

These are not my words, and it certainly isn’t my knowledge to share. I consider myself only a go-between for the wise Elders who offered their insight, and the larger community who may be in need of it.

And when you touch this knowledge, you become connected to people from eons ago — long gone, but not forgotten. At least not by the people who still carry on the tradition. My grandmothers were Cree, so to me this is personal, and perhaps I am trying to touch them.

Wahkohtowin, I’ve been told, is a central point in Cree natural law — a way to describe “laws” that are seen in the natural world, which can help guide our human actions. Wahkohtowin speaks to the interconnectedness of all things, and our responsibilities to those we share the world with and the future.

I found Elder Clarence Whitstone through the Onion Lake Cree Nation’s band office. Due to the great distance between us — there’s almost 1,500 kilometres between my home in Burnaby and Onion Lake, which straddles the Alberta-Saskatchewan border northeast of Edmonton — our conversation was just a phone call. But it was a special one.

Even before we spoke of Wahkohtowin, Whistone shared something incredible with me as he talked about the Frog Lake Massacre — a story that’s been told primarily through colonial eyes for generations.

‘We’re not violent, but neither are we cowards.’

The Onion Lake Nation falls under Treaty 6, in Fort Pitt on Sept. 9, 1876, by Chief Seekaskootch. In 1878, the Makaoo Band joined the treaty.

Nine years later, on April 2, 1885, a group led by a Cree man named Wandering Spirit killed Indian Agent Thomas Quinn and eight other settlers. The Canadian government, facing the North-West Rebellion, declared the two bands “rebels.” For almost two decades their chiefs were not recognized, until the government forced both bands to join together and become the nation they are today.

It wasn’t a massacre, Whitstone insisted. His grandmother, Isabelle Little Bear (Johns) was there.

“My grandma used to say, ‘Here, you listen to me. I’m going to tell you the story about what happened in Frog Lake. It wasn’t a massacre; it was a resistance. And in the future, when you grow up, you’ll see books written by people that weren’t there, that don’t even know what happened there. I was an eyewitness,'” Whitstone said.

“‘We’re not violent, but neither are we cowards.’ She used to that say that,” he said.

Little Bear believed her people were pushed to violence after years of starvation, colonialism, economic hardship and forced relocations that saw people dying on the long marches. Residential schools had been introduced to the Prairies two years earlier, adding to the oppression.

After Quinn was killed, there was more violence on both sides. The Canadian government sent troops and police to put down the uprising, and people who stole, or who even carried a gun on the Indigenous side, were taken into custody, according to Little Bear.

“I shall never forget the pitiful sight my people presented that day when they were marched away. Most of them we never saw again,” Little Bear recalled in an interview with the Bonnyville Tribune in 1968.

On Nov. 27, 1885, Wandering Spirit and five others who had participated in the events at Frog Lake were hanged.

Despite Frog Lake and the many other colonial disasters that fell upon Cree people, the older teachings — like Wahkohtowin — remain.

And today, Whitstone sees them becoming stronger and stronger. He explains the story of Wahkohtowin.

The sin was the humans’ attempt to control all the living things of the Earth, which made the other creatures unhappy. They sent the Eagle to get advice from the Creator, and the Creator decided to remove their ability to communicate with each other.

Wahkohtowin means “kinship,” and because we used to speak to all creatures, we still have this connection to them — whether verbal or in spirit. And the connection is not just spiritual, according to Whitstone, but it is also scientific.

What we do, and how we act in the world, has a direct effect on everything around us. This is Wahkohtowin, too, and it means that we have to consider our relations with everything as walk upon the Earth. Each step must be meaningful, and ideally, positive. Each action must reflect our responsibility to all creatures, and the future.

Whitstone honours his mother when he shares this teaching. She always told him to keep both the culture and the language near to him, he said.

Whitstone’s connection to his culture survived despite time in residential school. But the experience damaged both him and his mother, who also attended, he said.

The emotional trauma resulted in a rift in the family that took years to repair. Whitstone’s mother was an alcoholic for much of his young life, he said, though she later found sobriety. Her neglect made him feel “worthless” at times. But despite this, her teachings always remained strong, he added.

His mother, for example, insisted they use Cree words for family members, not the “daddy, mommy, auntie, uncle” taught in residential school.

“I was told to say, ‘Nohtawiy, my dad... nikawiy, my mom... uncle, nohcawis... auntie, nisikos... and so on,” said Whitstone. “My big brother, nistes... I was taught to do that because you highly respect that person when you say that. But there’s no respect when you use a colonial word.”

Those words come from the heart, Whitstone said. And when he teaches other Cree people these words, they resonate in the same way, he added.

“They feel really good inside because they can say that word. It’s so powerful to them... I tell them, ‘It’s because you’re nurturing your Cree spirit,’” he said.

Wahkohtowin goes beyond respecting nature to recognizing we are part of it. Bears and humans, for example, in Cree tradition, are relatives — a link made clear when hunters kill a bear.

“I’ve heard hunters say after they killed a bear, ‘I’m never going to kill a bear again. After I skinned it, that carcass was laying there, it looked like a human,’” said Whitstone.

Whitstone emphasized that Wahkohtowin is about living with each other “in a good way.” But his mother sometimes had harsh ways of showing him this.

“She would always tell us, ‘One of you siblings... one day you’re going to be laying in that coffin. And if you don’t get along together, that’s where it’s going to hit you.’”

Whitstone said it shocked him to hear his mother speaking of death when they were so young, but he now realizes she was right. His brother passed away a few years ago. At the funeral, he had a moment where he thought to himself, “Was I ever mean to him?” Because of his mother’s sharp lessons, he could say no.

“And that eased the pain a little bit,” he said.

Thinking beyond the immediate

Leona Makokis is an instructor at University Blue Quills in Saddle Lake, Alberta, training people who work in child and family services. Makokis, of the Saddle Lake Cree Nation, is a former president of the college and has delivered social work training at the University of Calgary. 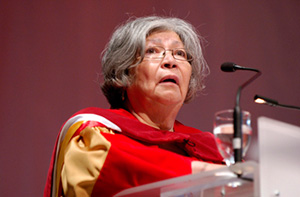 She, too, defines Wahkohtowin as “kinship.” And she agrees that residential schools have affected the way Cree people have been able to relate to their traditions, as well as to each other.

She lost the language at the age of five, when she developed tuberculosis and was sent to the Charles Camsell Indian Hospital, then to residential school. But she found her way back to the culture in her late 20s and is now also a language teacher.

One very significant Wahkohtowin principle, said Makokis, is thinking beyond the immediate.

“Our strongest belief is ensuring we maintain balance... that we never take more than we need. We are responsible for seven generations in the future. So, our actions today impact seven generations, and we always have to be aware of that,” she said.

And because of this, the connection to nature is important — as Whitstone stressed — as it is linked to the well-being of all creatures, including humans.

It seems, I gathered, that all people — not just Indigenous people — could benefit from Wahkohtowin.