British Columbia’s new school curriculum fails to ensure climate change will get the attention it deserves in classrooms, warn four teachers in the Burnaby school district.

“I strongly believe there should be very explicit language in the Science 8-10 curriculum which covers this topic in greater depth,” says Katharine Lange, head of the science department at Moscrop Secondary in Burnaby. “As local and global citizens, all students in British Columbia should be informed as to the scientific principles, supporting data, and overall ecological impacts of climate change.”

Years in the making, the revised Grade 10 curriculum is finally being used in all B.C. schools this year. Teachers also have the option of testing the new Grade 11 and 12 curriculum before it becomes mandatory next September.

The new curriculum has fewer facts to memorize and puts more focus on students’ understanding of specific concepts, like personal responsibility and cultural awareness, and their application in different subject areas. It also calls for students to learn skills like using math and science formulas, conjugating verbs and writing essays.

The new curriculum is designed to be more open to what students are interested in learning and teachers’ areas of specialization.

However the Burnaby school district teachers fear that autonomy may go too far when it comes to climate change. Climate change is not explicitly mentioned as a core concept for any mandatory course in the Grade 8 to 10 curriculum, they note.

“The school system has a role in helping students understand what climate change is, understanding how serious it is,” said Patrick Parkes, an English and Japanese teacher at Moscrop Secondary.

“Because I think if you look at the evidence, climate change is going to be one of the things that is going to have the biggest impact on current students’ future lives.”

The teachers, from science, social studies, English and French backgrounds, say climate change should be explicitly identified as a core concept in the Grade 8 to 10 curriculum, the final years that almost all students take the same mandatory classes before they choose more specialized courses in Grades 11 and 12.

In an email to The Tyee, an education ministry spokesperson maintained climate change is part of the updated curriculum. It’s a “very broad and expansive topic,” the email said. “Students and teachers are able to engage in learning about climate change in multiple ways and at multiple levels.”

But Lange said those courses aren’t mandatory and may not even be offered in schools, depending on demand.

“Many schools choose to run Life Sciences 11 instead of Environmental [Science] 11, which means most students would not have exposure to an in-depth look at climate change,” she told The Tyee via email.

Science 10 also mentions “local and global impact of energy transformations,” while Socials 10 and 11 mention climate change as a possible topic of discussion. But there is no explicit mention of climate change in the core content of the new curriculum for those courses.

The Social Studies 9 curriculum, which covers the period that includes the Industrial Revolution and the birth of humans’ reliance on fossil fuels, makes no mention of climate change either.

“It does come back to teacher autonomy, and I like that, I don’t want to abandon that,” said Dale Lintott, head of Moscrop Secondary’s Social Studies department. “But it should be at least listed as a suggested topic.”

The teachers say they sent a document outlining their concerns about the curriculum to Jonina Campbell, second deputy leader of the BC Green Party and the party’s education spokesperson during the 2017 election campaign. Campbell passed it onto ministry superintendent of learning Pat Duncan.

Parkes said he heard from Duncan last spring that the document would be discussed. He emailed Duncan for an update in September and is still waiting for a response.

While climate change is a frequent topic in the news, Parkes believes the public’s understanding of humanity’s contribution is poor, citing a poll conducted earlier this year that found almost one-third of Canadians don’t believe industry and human activity are the driving forces behind climate change.

“Our children, when they grow up, are going to be making political choices and need to be as informed as possible,” Parkes said.

Bill Harvey, an Alpha Secondary French immersion teacher who will be teaching Socials 11 starting in January, acknowledged that discussing climate change veers into political territory. But he says education should be more political.

“We should have a frank and open discussion in school.” 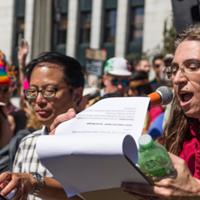 Ross’s advocacy for more coverage of the environment led to meetings with the ministry over curriculum design. Ross says he appreciated the meetings and the ministry’s overall openness to public feedback, which led to improvements made to the draft curriculum.

“However I do agree there should have been more emphasis on the study of weather, climate and climate change beginning in elementary and continuing into the secondary program,” the now-retired Ross told The Tyee via email.

“These topics are crucial for the development of an eco-literate citizen who is fully informed and capable of making wise decisions on climate related issues.”

The Tyee requested an interview with Education Minister Rob Fleming, but he was not available. However, the ministry said via an emailed statement that just because the new kindergarten to Grade 10 curriculum is now in use doesn’t mean it’s set in stone.

“The Ministry of Education is also working to establish a regular curriculum review and update that can lead to some modifications of the curriculum to better support students in their learning.”