Federal Green Party leader Elizabeth May says proposed rule changes for environmental assessments in Canada still leave the country’s environmental protection regime behind where it was prior to the Stephen Harper government.

May said she’s worried the regulation changes are too ambiguous and open to political interference while failing to bring back the kind of stringent regulations Canada had 15 years ago before the Harper government weakened them.

“It’s a substantially weird piece of hybrid legislation,” May told The Tyee. “It keeps much of what Harper did without restoring all of our protections.”

Environment Minister Catherine McKenna released an omnibus bill Thursday with a number of changes to environmental legislation she described as “better rules” for environmental assessments for major projects in Canada.

The changes include “transparent, science-based decisions,” protecting navigable waters and greater efforts for public engagements on major projects among other stated goals. The National Energy Board would also be scrapped as part of the new regime and replaced with the Impact Assessment Agency of Canada.

May said the regimes lost with those bills have not been reinstated with Bill C-69.

She also is concerned about a stipulation deep in the act dictating a review panel involving offshore petroleum in Nova Scotia must include two members chosen by the Canada-Nova Scotia Offshore Petroleum board.

The board is a government agency partly tasked with developing the industry.

“You’re putting the people who have a mandate under their legislation, in the case of offshore boards, to promote oil and gas on the panel to review oil and gas projects,” May said.

It has been a tough week for the federal Liberals in British Columbia where the Trans Mountain pipeline has caused a fracture between Victoria and Edmonton.

The proposed expansion of the pipeline would triple its oil capacity and lead to a seven-fold increase of tanker traffic in the Salish Sea. Opponents warn one spill could wipe out the fragile ecosystem of B.C.’s coast.

The B.C. government has proposed capping oil flow through the province from Alberta while it studies the potential affects of the pipeline expansion. Alberta has retaliated by refusing to buy B.C. wine through its provincial liquor agency.

McKenna and Prime Minister Justin Trudeau have repeatedly said the pipeline will get built.

But if Bill C-69’s regulations were meant to gain goodwill back from British Columbians it likely won’t work, said Kai Nagata of the Dogwood Initiative. 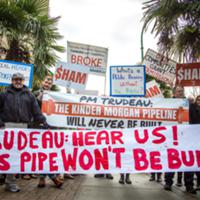 He said the overarching aims of the bill aren’t new.

“It’s just infuriating from a British Columbian perspective to be read off this list of nice sounding things that we were promised on Kinder Morgan that are never going to happen,” Nagata said.

He said there’s still questions about where the headquarters of the new Impact Assessment Agency of Canada will be and who will be working there, suggesting the feds will just slap a new name on the NEB’s current home in Calgary.

Rhetoric from pro-pipeline groups saying B.C. is defying the Constitution and bravado from the prime minister insisting the pipeline will be forced through because it is in the national interest is not helping matters, Nagata said.

B.C. is merely trying to protect its own interests he said.

“It’s not British Columbians that are threatening the fabric of Canada. It’s the people who are calling for the federal government to crack down on us like some sort of doormat compared to the other provinces.”