Duclos — the minister responsible for the Canada Mortgage and Housing Corporation (CMHC) — laid out the details Wednesday of the 10-year, $40 billion strategy at a press conference in Vancouver’s Downtown Eastside neighbourhood, known for poverty and homelessness.

The goals to be accomplished in the next decade by the strategy include reducing chronic homelessness by half, removing more than 530,000 from housing need, creating 100,000 new housing units and repairing another 300,000 units.

Actions include legislating housing as a human right, partnering with other levels of government and housing providers, negotiating separate strategies for First Nations, Metis, and Inuit housing and reinvesting in new and existing affordable rental and non-profit housing.

One specific program is the National Housing Co-Investment fund for “affordable housing” in 2018 ($4.7 billion in financial contributions; $11.2 billion in low-interest loans). Another is a new $4-billion program called the Canada Housing Benefit, which aims to provide an average of $2,500 a year directly to families and individuals in housing need. The benefit will be rolled out in 2020.

“They committed to it and they did it. This is very significant,” said Penny Gurstein, director of the School of Community and Regional Planning and the Centre for Human Settlements at UBC.

“The fact that people have been [calling] this now for a number of years and they actually listened is very important.”

The money involved with the strategy is more funding than expected, after the Liberals announced in their March budget $11.2 billion over the next 11 years for housing.

However, the Liberals’ term ends in 2019. The Tyee asked Duclos how the Liberal government can guarantee the National Housing Strategy will be in place beyond the next election.

“Well, democracies are democracies,” Duclos said. “However… it’s becoming very clear to Canadians that federal partnership is important. The cost of not investing in housing cannot be borne by provinces, territories and municipalities. That cost needs to be shared by a federal partner…”

The right to housing

The details of how the Liberals will carry out their “human rights-based approach” remains to be seen.

“We’ve seen so much rhetoric with the Liberal government with regard to women’s rights and Indigenous people,” said Margot Young, a professor at UBC’s Allard School of Law. “So one would hope that the details, the concrete actions, commitments, the enforcement mechanisms and accountability the government sets up in the National Housing Strategy will be full, so we can say that we have a government that’s prepared to call itself to account and deliver on what it says.”

Canada signed and ratified the 1976 United Nations’ International Covenant on Economic, Social, and Cultural Rights (ICESCR), which recognizes “the right of everyone to an adequate standard of living for himself and his family, including adequate food, clothing and housing, and to the continuous improvement of living conditions.”

However, the right to housing has not been replicated in Canadian law and cannot be enforced. The strategy said the federal government will “introduce a bill to enable new legislation that promotes a human rights-based approach to housing.”

Nathanael Lauster, a UBC housing sociologist, said the federal government must define exactly the housing rights that Canadians would have.

While the federal government figures out what it considers a right to housing, the UN Committee on Economic, Social and Cultural Rights has already defined adequate housing. Its seven criteria include legal security of tenure (“legal protection against forced eviction, harassment”) and affordability (housing costs “should be at such a level that the attainment and satisfaction of other basic needs are not threatened or compromised”).

The first priority of the strategy is adequate, secure housing for vulnerable Canadians, such as seniors, Indigenous peoples, people with disabilities, women and children fleeing family violence, those dealing with mental health and addiction issues, veterans and young adults.

The strategy pledged a 50 per cent reduction in chronic homelessness over the next 10 years with a new $2.2 billion investment housing focusing on assisting homeless women-led households, seniors, veterans and Indigenous people. Funding begins after the current Homelessness Partnering Strategy funding runs out April 1, 2019.

The strategy release, which took place in a meeting room in the Woodwards Community Housing supportive housing program, helped remind meeting residents of the dire need for housing the homeless, many of whom struggle with substance abuse and mental illness.

“Just outside this building, when I walked in, there’s somebody on the ground, she’s Aboriginal, and she’s crying and someone is trying to attend to her needs,” said David Seymour, vice president of the M’akola Housing Society, which funds and manages urban and rural Indigenous housing units across B.C.

“We had to walk by her to get up here. I hope something from this statement up here gets down there to that lady.”

The National Co-Housing Investment will also help support the most vulnerable through 7,000 new or renovated domestic violence shelter spaces, 12,000 affordable housing units for seniors and 2,400 housing units for adults with developmental disabilities.

“I think the approach was to deal with the most vulnerable, which is very good. The fact that they’ve committed funding that will address women and children’s needs is very important,” UBC’s Gurstein said.

“It’s ambitious to try to end 50 per cent of homelessness.”

But while she is pleased with the focus on more vulnerable sections of the population, Gurstein said housing is a spectrum of need that includes people making middle class wages but unable to afford housing in a city as expensive as Vancouver.

“I think the [strategy doesn’t address the] affordability crunch for young families who are not the most vulnerable, but their incomes are just not keeping up with the cost of housing,” she said, adding some middle-class families could benefit from the affordable rentals created through the National Housing Co-Investment Fund.

“It doesn’t deal with the issues facing Vancouver in that they would need to be going in and looking at ways of cooling the market, and it doesn’t seem like they’re very interested in doing that.”

The strategy mentions little in the way of new funding for Indigenous housing, with the exception of $300 million to assist 3,000 families in the North with housing. The federal government listened to Indigenous communities and is working on separate strategies for Inuit, Metis and First Nations housing needs.

“These strategies will be founded in principles of self-determination, reconciliation, respect, and cooperation,” Duclos said. He said provinces and municipalities will also be at the table with Indigenous groups.

No details were provided on when the strategies would be released, but consultations have been underway for the past year.

Indigenous housing providers knew there would be separate strategies, M’akola’s Seymour said. But he is concerned that Indigenous leaders, responsible for housing in Indigenous communities only, would be the only Indigenous representatives at the table.

“[Duclos is] leaving off the table the discussion with the urban [housing providers] such as the Aboriginal Housing Management Association,” Seymour said, referring to the B.C. umbrella organization also known as AHMA that represents 41 rural and urban Indigenous housing providers in the province.

“We’ve been working through AHMA to ensure that the province will bring us to the [negotiating] table. There’s a lot of details that are yet to be unfolded.”

Some rural and urban Indigenous housing providers will benefit from the $4.3 billion Canada Community Housing Initiative that will continue funding for 385,000 units of non-profit housing still under a provincial or federal operating agreement.

However, there were close to 600,000 units of housing built under federal or provincial housing programs, and there is nothing in the strategy for those units whose operating agreements — and the subsidies that helped keep their rents low — have expired. 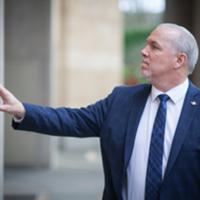 “But that’s only one part of the story. The $16 billion co-investment fund is there, in large part, to support community housing across Canada.”

Seymour said he’s concerned that housing providers whose agreements expire before the dollars start to flow will be left in the lurch.

“What happens if you expire tomorrow? Or at the end of this year?” he said. “They might not be saved because this might not be implemented in time.”

Criticisms aside, Seymour was positive about the new strategy.

“The excitement to this announcement is that the federal government is back. And they’re back in a big way.”