Green Party Leader Andrew Weaver took aim Thursday at a British Columbia government program that provides loans to first-time homebuyers, one which the NDP criticized in opposition but has so far kept on the books.

Weaver asked in the Legislature, “When will this government eliminate the program, which [does] nothing more than incentivize British Columbians to take on more debt than they can afford, a reckless incentive particularly when the interest rates are rising, as they have twice already this year?”

The Tyee reported last week that the B.C. Home Owner Mortgage and Equity Partnership remained a “featured Government of B.C. service” on the province’s website, even though former NDP housing critic David Eby had characterized it as “completely bizarre” while in opposition.

Launched by former Premier Christy Clark and then-former housing minister Rich Coleman in December 2016, the program loans first-time homebuyers up to $37,500, with no interest or payments required for five years, to help them afford a down payment on homes worth up to $750,000.

The government is reviewing the program as part of the budget process, Finance Minister Carole James said in response to Weaver. In the budget update presented in September, the program’s three-year allocation of $700 million was cut by $500 million, she said.

“The program has been underutilized because of the concerns that the member has raised,” James said.

According to government figures provided last week, there have been 1,395 mortgage loans approved and funded through the program.

Adam Olsen, the Green Party’s housing critic, told The Tyee he wants the program eliminated as soon as possible.

“I would love for that program to be gone,” he said. “It just seems to me like this was a completely wrongheaded approach and a disaster gift-wrapped for first-time homebuyers from the previous government, and it would make sense to get rid of it.”

With people already struggling with high levels of household debt and with interest rates rising, offering people more debt will put them in greater financial jeopardy, Olsen said. It will also drive up prices, he said. “Throwing more money into the market is not really the solution to the demand side of the issue.”

It’s positive that the government is scaling back the program and hopefully more action on housing will come in the February budget, he said.

While the Green MLAs are highlighting areas where they’d like to see action, they also understand the government needs to move carefully, he said. “I think it would be easy to be critical that the government should have just jumped on a bunch of housing issues,” said Olsen. “It’s a big complex web out there. You do one thing, and other unintended consequences might happen.”

He added, “We’re looking at that February budget with some pretty high expectations that there’s some substantial action taken.”

In the Legislature, James said the September budget update included funding for 1,700 affordable housing units and 2,000 modular housing units. The government has added resources to the residential tenancy branch and improved information sharing as a step towards addressing speculation in the real estate market, she said. 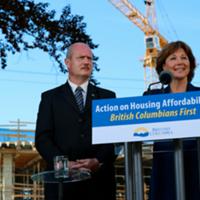 “After 16 years of ignoring the housing crisis in British Columbia, there's a lot of work that has to be done,” James said.

On Thursday, the government also introduced legislation aimed at eliminating the use of vacate clauses in fixed-term leases, except when a person is renting out their home but planning to return on a particular date or when a tenant is subletting a unit to someone else for a set period of time.

“Tenancy laws that are there to protect both renters and landlords have been circumvented by using a loophole in the fixed-term tenancy rules to increase rents well above the annual allowable limit,” said Selina Robinson, the minister of municipal affairs and housing.

The changes will give the province’s 1.5 million renters more housing security and will improve the integrity of the rental market, which will be good for both renters and landowners, she said. “Taking action on this unfair loophole was one of my first priorities as housing minister.”