More needs to be done to make sure the membership lists for Canadian political parties holding leadership votes are legitimate, says a former Manitoba politician.

“I think it’s very damaging for a democracy to have a subset able to manipulate [the political process] to their benefit,” said Don Scott, who was an NDP MLA in Manitoba for seven years in the 1980s before moving to British Columbia where he worked in the civil service before retiring. “This has gone on way too long. Everybody is afraid to speak out.”

He made the comment as the federal NDP leadership contest draws to a close and the BC Liberal Party’s leadership race begins.

In the NDP race, Ontario MPP Jagmeet Singh is seen as the likely front-runner thanks to his success signing up a reported 47,000 new members.

That’s a significant portion of the 124,000 members the party said it had when the window closed in mid-August for new members to be eligible to vote in the leadership. The party had tripled its membership from four and a half months earlier. It included 52,200 members in Singh’s home territory of Ontario, as well as 31,974 in British Columbia, 10,188 in Alberta, 10,134 in Manitoba and 8,083 in Saskatchewan.

Political parties like talking about inflated membership numbers, Scott said. But he cautioned, “It’s all bullshit. Most of these memberships won’t be renewed next year.”

That’s been the experience from past campaigns that have seen influxes of members who disappear after their votes are counted in the leadership, he said.

“The only people who can really take advantage of this the way it is are the ethnic groups,” Scott said. “It’s a group of people who are orchestrated. Some groups are more open to being manipulated than others.”

Parties should limit membership to people who are eligible to vote in a general election and they should have to pay for their own membership fees, Scott said. Parties could also require memberships to be renewed at least once before a person is eligible to help pick the leader, thus showing they actually support the party and were not just “instant” members, he said.

Governments could require Elections Canada and provincial agencies that oversee elections to handle memberships for the parties, he said. The independent bodies could vet the memberships to make sure the individuals exist and that they are citizens. 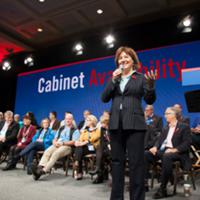 Six Things to Know about the BC Liberal Leadership Race

“I think you need to protect your political system so it has some credibility,” Scott said. “We’re very, very naive in this country to think this isn’t happening big time.”

An NDP spokesperson did not respond to questions by publication time. Rules for the leadership contest stipulate that candidates will be given membership forms in batches of 10 and will be limited to having five batches at a time.

“If in the opinion of the CEO, more than [five percent] of all Paper Membership forms submitted by a candidate by the cut-off date are deemed to be fraudulent, the entirety of said candidate’s Paper Memberships shall be considered voided and the individuals will not be eligible to vote,” the rules say.

There’s also a measure to make sure campaigns aren’t paying for people’s memberships: “It is prohibited for a candidate or a person working on behalf of a candidate to pay for any membership fees or any other fees associated with the leadership race for any other party members.”

Online voting started Sept. 18 with results of the first ballot to be announced Oct. 1.

The BC Liberal Party requires members to be at least 14 years old, residents of B.C. and not a member of any other provincial party, spokesperson David Wasyluk said in an email. “As the leadership race unfolds, we are putting in place verification protocols to help ensure the provided information is accurate. These include both regular and random checks of data on submitted membership forms.”

Wasyluk said the party no longer allows for memberships to be bought with cash or prepaid credit cards, helping to ensure they are legitimate. That will mitigate issues, as will the $10,000 “compliance deposit” the party requires from candidates, he said.

Concerns about mass sign-ups of members have been raised in many past leadership and candidate nomination contests. In the 2011 BC Liberal leadership race won by Christy Clark, the party membership doubled, but questions were raised about vetting after the list was found to include at least one cat.

In the 2011 provincial NDP leadership race won by Adrian Dix, MLA Mable Elmore was caught on video stapling $10 bills to membership forms, leading to complaints to the party from Dix’s opponents about the legitimacy of the memberships.