Biologist and wild salmon activist Alex Morton is once again patrolling the B.C. coast on a Sea Shepherd Conservation Society ship in an attempt to bring attention to declining wild salmon stocks and chronic disease problems on industrial fish farms.

Her “Operation Virus Hunter 2” mission on the Martin Sheen has already drawn a testy response from the Norwegian-dominated industry.

“We’re disappointed that this latest American funded and organized activist campaign is attempting to paint a misleading picture of an industry that provides a healthy, sustainable product that feeds millions of people,” said BC Salmon Farmers Association executive director Jeremy Dunn in a prepared statement. “This is a distraction from the important research under way to better understand the real issues affecting wild salmon.”

Morton says she hopes this year’s mission will provide a platform for First Nation concerns about the impact of salmon farms and draw attention to what she sees as the conflicted role of the Department of Fisheries and Oceans.

Morton is suing the department, claiming it is breaking the law by not testing farmed salmon for piscine reovirus (PRV) before allowing them to be placed in net pens in the sea. Norwegian-based Marine Harvest and Japanese-based Cermaq have joined the DFO in fighting the lawsuit.

The lawsuit is based on a 2015 Federal Court ruling that found the DFO wrongly delegated responsibility for deciding whether to release infected fish to Marine Harvest.

The Federal Court gave the DFO until September 2015 to revise licences granted to the company.

Morton sued the Minister of Fisheries and Oceans again in 2016, alleging the DFO’s failure to comply with the ruling is putting wild salmon at risk.

In an interview, Morton said Fisheries Minister Dominic Leblanc should do the right thing and order the companies to test their fish and protect wild salmon.

Last summer’s Sea Shepherd mission was marked by controversy. The industry complained that its workers were harassed by low flying drones and “activists with cameras taking images of their living quarters.”

But The Tyee was on board the Martin Sheen for three days. While both sides were taking lots of photographs, there was no evidence of incivility or harassment.

During the mission Morton filmed a significant die-off at a Cermaq fish farm in the Okisollo Channel just off Vancouver Island.

Morton also plunked a camera into a Marine Harvest operation in the Broughton and captured a video that apparently shows farmed salmon suffering from tumours and emaciation. The video went viral and outraged the industry.

But the most drama occurred in the Broughton Archipelago, where leaders of the Musgamagw Dzawada’enuxw boarded three fish farms, performed “cleansing” ceremonies and gave eviction notices. More than 30 fish farms owned by Cermaq or Marine Harvest operate in the First Nation’s territory.

The Dzawada’enuxw have opposed fish farms on their territory for 30 years and never signed any financial agreement with the companies. They believe that the farms have played a significant role in reducing wild salmon and herring populations in their territory.

Morton said if the Trudeau government respects aboriginal treaty rights it would remove uninvited fish farms from their territory.

Marine Harvest later sued Morton and “Jane and John Doe,” the legal term for unidentified individuals, for trespassing on one of its farms during the mission.

After Dzawada’enuxw members stepped forward to say they had boarded the fish farm with Morton and had a legal right to inspect the farms in their territory, the company later dropped “Jane and John Doe” from the lawsuit and focused on Morton.

Morton, who has written more than 20 scientific papers on the environmental impact of fish farms, has sued the fish farming industry five times. She has claimed victory three times; one case was not allowed to proceed; and the fifth case is still underway against the DFO and the industry.

Morton says the fundamental issue is the protection of dwindling populations of wild salmon. She and many commercial fishermen argue the declines directly correspond to the spread of Atlantic salmon feedlots on wild salmon migration routes.

Research by Morton and other scientists suggest that a combination of industry-induced viral and bacterial diseases and sea lice infestations have taken a heavy toll on young wild salmon over the last three decades.

Ireland, Scotland and Norway have also reported declines in their wild fish populations after the introduction of fish farms.

A 2016 report by the Scottish-based North Atlantic Salmon Conservation Organization found “there is substantial and growing evidence that salmon aquaculture activities can affect wild Atlantic salmon, through the impacts of sea lice as well as farm escapees.”

The B.C. fish farming industry contends the industry has had no major impact on wild salmon populations.

But tracking the impact of possible virus transmission from farmed fish is notoriously difficult because the evidence disappears quickly. Sick wild salmon are eaten before they can be caught and tested.

Morton says the decline in wild stocks as the industry expanded should be evidence enough for action.

“If a television is missing in the living room and the window is broken, the weight of evidence says it was burglar or a robber even though you didn’t seem him,” she says.

George Quocksister, a hereditary chief of the Laichkwiltach Nation in Campbell River and long-time commercial fishermen, has joined Morton on the Sea Shepherd vessel as it visits fish farms in the Discovery Islands.

Quocksister says that most hereditary chiefs on the coast oppose fish farms. Many elected chiefs don’t because they are involved with the industry, said Quocksister.

“Fish farming is a dirty industry and these Norwegian fish farmers need to go back to their own country,” said Quocksister. “Even a blind man could see what they are doing.”

Earlier this year new research showed that despite industry and government denials a deadly and durable virus has been causing disease in B.C. salmon farms. 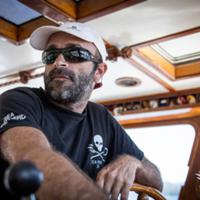 Meet the Crew Aboard the Fish-Farm Patrolling ‘Martin Sheen’

The study, supported by the Department of Fisheries and Ocean’s Strategic Salmon Health Initiative, confirmed that heart and skeletal muscle inflammation (HSMI), the third largest killer of farmed fish in Norway, occurs in B.C. and has caused disease at a fish farm in the Discovery Islands between 2011 and 2013 and possibly at three other farms between 2013 and 2014.

The study, by federal scientist Kristi Miller and others, also shed light on the links between piscine reovirus, common in farmed salmon in B.C., and HSMI.

Declining salmon stocks have a broad impact, as demonstrated by a recent study in which dogs sniffed out floating orca poop that was then used to analyze the whales’ health.

The multi-year survey of the nutritional and reproductive health of endangered southern resident killer whales found that up to two-thirds of pregnancies failed from 2007 to 2014.

Researchers linked the reproductive failures to declines in the orca’s favoured food source, Chinook salmon from the Fraser and Columbia Rivers.

“That study is a five-alarm bell on the future of wild salmon and orcas on this coast,” said Morton.

According to the BC Salmon Farmer Association, “farm-raised salmon is B.C.’s highest valued seafood product, the province’s top agricultural export, and generates over $1.1 billion towards the B.C. economy.” In 2011 aquaculture accounted for almost half of all seafood eaten by humans.