Low wages and long working hours are a fact of life for migrant workers on B.C. farms. Lack of transportation can make things even harder. Whether they need to send money home to families or shop for groceries, workers can face isolation and frustration when they’re stuck on the farm.

A Vancouver group called Bici Libre is working to change that. The volunteer-run program donates bicycles and runs bike repair clinics for temporary workers from countries such as Mexico and Guatemala who work on farms around the Lower Mainland.

Bici Libre founder Lauren Warbeck said the idea for the program emerged from conversations with other organizations that work with migrant worker communities.

“One of the things that they said that would be really useful was providing bicycles and bicycle repair services because only certain workers are designated to drive,” she said.

“And so it means that lots of people are essentially living kind of physically trapped on the farms. Not in a malicious way, but in the sense that they don’t have any autonomy over their own transportation.”

Bicycles, she said, offer workers freedom as well as saving them time and energy.

Run though the AMS Bike Co-op at the University of British Columbia, the project has evolved since it began in 2015. Although it started with the aim of distributing donated bicycles and running free repair clinics in places such as church parking lots, Warbeck quickly came to see what workers really needed.

This year, the program is more focused on going out to individual farms to assess the needs of workers and offer solutions. The team co-ordinates with a group called Sanctuary Health to determine where their services are needed.

They fix bicycles that are already on the farm, donate bicycles where needed, and provide tools and education to help workers care for bicycles on their own.

Some farm owners are open to Bici Libre’s support. They recognize the benefits of making bicycles available to workers, said Warbeck, but lack the means to provide them.

“The reality, of course, is that farmers are in a financial crunch. There is always more work to do on a farm. There’s always never enough money to do it,” she said.

Other farm owners are less enthusiastic. “We’ve certainly been welcomed warmly and not so warmly by some others,” said Warbeck.

Warbeck said that because temporary foreign workers are in a vulnerable position — if they displease an employer they might not be hired again the following year — the group is careful when approaching new farms.

“There are farmers who are very private about their farms and their operations and see us as a threat,” she said. “So we always follow the workers’ suggestions and ideas. We don’t directly interact with farmers unless we get the go ahead from the workers.”

Aida Mas is this year’s co-ordinator for Bici Libre. She worked closely with Warbeck when she was setting up the program in 2015 and was drawn to the program out of a sense of duty.

“I thought it was almost our responsibility as people that benefit from food systems that are wholly supported by the labour of these workers,” she said.

So far this summer, Mas said, the group has held five bike repair clinics, distributed about 25 bikes and fixed approximately 40. They are constantly seeking donations and volunteers to build the program’s capacity. 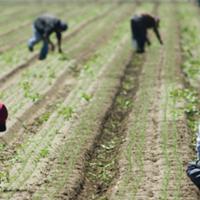 This year, said Mas, the program has started working with temporary foreign workers in the city of Vancouver who work in industries outside of agriculture.

Both Mas and Warbeck see increasing autonomy for migrant workers as the goal of the program. But Warbeck said Bici Libre has a broader purpose as well.

“I think there’s this illusion that migrant workers are not part of our world or our communities or our life,” said Warbeck. “But the food that we eat is produced by these folks. They commit their lives to being here, thousands of kilometres away from their families, seeking to support their families.”

Bringing student volunteers together with migrant workers in bike repair workshops, she said, is a way to build community and raise collective consciousness about the struggles and barriers faced by the people who farm our food.

“The more we can humanize migrant workers in the minds of people, not just in B.C. but also in other areas where there’s lots of migrant workers,” she said, “the more likely it is that migrant workers will be able to get the things that they need.”