The main killers of moose in an ongoing study in British Columbia have been wolves, unlicensed hunters and starvation.

As of April 30 last year, a progress report says, researchers had put GPS radio-collars on 336 cow (or female) moose in five areas of central B.C. as part of a study begun in 2012, “Determining Factors Affecting Moose Population Change in British Columbia: Testing the Landscape Change Hypothesis.”

With moose populations observed to be in decline in the province, the aim was to study how the changing landscape affected moose numbers, particularly in forests hit hard by the mountain pine beetle.

Researchers recovered 49 of the collars from animals that had died. In 21 of the cases, they determined that predators had caused the death, with grey wolves responsible for 18 of them. There were also two moose killed by cougars and one by a bear.

Nine moose were killed by human hunters, only one of whom was licensed. Eight moose had died of “apparent starvation.”

Study authors included Ministry of Forests, Lands and Natural Resource operations staff in Cranbrook, Prince George, Kamloops, Williams Lake and Smithers, as well as a professor from the University of Northern British Columbia in Prince George.

The researchers’ hypothesis is that moose will be more likely to survive when forest cutblocks regrow enough to obstruct the view of predators and hunters, resource roads become impassable, and moose become more dispersed.

“We will address that hypothesis by identifying the causes and rates of cow moose mortality and examining factors that contributed to their vulnerability,” the progress report said.

Researchers at UNBC and the University of Victoria are analyzing the data, and already the authors are recommending extending the study until 2023, five years past the currently planned end date.

In October, the B.C. government announced it would spend $1.2 million, on top of the $750,000 per year it already spends on moose management, to help increase moose populations. 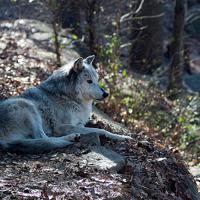 At the same time, the government said it would act on all 21 recommendations in forester Al Gorley’s “Strategy to Help Restore Moose Populations in British Columbia.”

Immediate actions included cutting the number of cows and calves to be hunted to 200, down from 1,792 in 2011, and preparing moose management plans for the Peace, Omineca and Cariboo regions.

In his July report for the ministry, Gorley wrote that moose populations had been declining for a decade, significantly in the central interior of the province.

“There is uncertainty about the underlying causes, which are likely a combination of altered habitat, hunters and predators, and perhaps even climate change,” he wrote.

“Many people point to a need for the province to modernize the way it manages for wildlife, taking a more integrated, ecosystem-based approach. Although this report is focused on the immediate matter of moose, it could be a first step toward more holistic change.”