It includes the promise of two “large vessels capable of towing commercial vessels and large container ships” that will be leased and the installation of towing kits on larger Coast Guard vessels.

But the plan makes no mention of a tanker ban.

The announcement comes as attention is focused on the slow and ineffective response to a tug boat sinking and diesel fuel spill on B.C.’s coast near Bella Bella. The disaster has threatened the environment and resources traditionally used by the Heiltsuk First Nation.

Jess Housty, elected councillor for the Heiltsuk Tribal Council, said Trudeau’s response plan was “on point” and aspects of it were “heartening.”

“I’m particularly excited to see the recognition of the importance of local knowledge and traditional knowledge and Indigenous leadership in navigation and response in shipping safety,” she said.

She said she wasn’t surprised there was no tanker ban in today’s announcement, but is holding out hope one is announced in the future.

“I hope we see it soon,” she said. “I think they would have a very difficult time backing away from that promise.”

But NDP MP Nathan Cullen, who represents the North Coast, said he fears the government is retreating from the commitment to a tanker ban.

Cullen said while some parts of the plan are “laudable,” other parts, such as stressing spill response cleanup abilities and polluter-pay provisions, suggest the government is backing away from a tanker ban that would reduce the risk of spills in the first place.

Trudeau committed to the tanker ban in his mandate letter to Transportation Minister Marc Garneau a year ago. “Formalize a moratorium on crude oil tanker traffic on British Columbia’s North Coast,” wrote Trudeau.

But the prime minister did not want to talk about such a moratorium Monday when asked by a reporter why it wasn’t included in the coastal plan.

“This is about the protection of our three coasts,” Trudeau responded. “I’m sure we’ll have more to say about them in the coming weeks.”

Cullen said the answer was “insulting” and ignored the reporter’s question.

Anything less than a full moratorium of oil tankers on the North Coast would be a betrayal, he said.

The announcement comes at a tricky time for the federal government as concern about B.C.’s coastline has been thrust into the spotlight.

On Oct. 13, a tugboat ran aground near Bella Bella, sank and began leaking the more than 220,000 litres of diesel fuel it was carrying. Cleanup response has been slow and plagued with problems.

That incident prompted a call for better marine protection for the B.C. coast from the Conservative opposition last week, including better salvage capabilities. “Conservatives are urging the Liberal government to work with the province of British Columbia and First Nations to implement this plan as quickly as is possible,” the statement said.

Ottawa is expected to announce its decision on Kinder Morgan’s controversial Trans Mountain pipeline expansion in December. The project would triple pipeline capacity to allow 890,000 barrels, primarily of diluted bitumen, to travel from Alberta to a marine terminal in Burrard Inlet in Metro Vancouver for export. 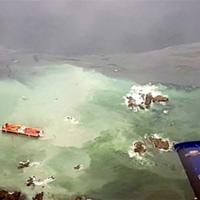 Environmental groups warn of serious risks of a spill and to marine life by the nearly seven-times increased tanker traffic resulting from the expansion, if approved.

The approval process for the project has come under intense criticism.

Northern Gateway, the one pipeline project that would result in a major presence of tankers on the North Coast, appears to be dead, but environmental groups still insist they’d like to see an oil tanker ban on the pristine coast.

Cullen said he doesn’t have a problem with parts of the plan strengthening safety on the coast, but stressed a moratorium on tankers should be the centerpiece of such a plan.

Despite Trudeau’s own praise of the plan, Cullen said a lack of detail available Monday and the silence on the moratorium have him concerned.

“The large print giveth and the small print taketh away when it comes to the Liberal party,” Cullen said.