The interests of BC Liberal Party donors who fund Premier Christy Clark's salary top-up appear to be determining the government's response to the housing affordability crisis in the province, says NDP critic David Eby. 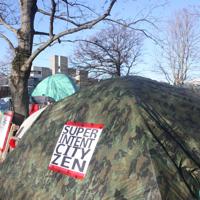 A lot of BC Liberal donations come from wealthy people in the real estate industry, and the party's person in charge of keeping them flowing is himself a top marketer of condo developments, Bob Rennie.

A recent City of Vancouver study found that roughly 12.5 per cent of condos in the city are empty, Eby said. And yet the government has declined to take steps to discourage owners from allowing condos or other homes to sit empty.

Asked Eby, "Why would [Clark] rush to put an additional tax on international investors holding these condos empty if she's getting major donations from luxury condo builders who want this to continue?"

Clark confirmed this week that she has personally received in total more than $300,000 from the BC Liberal Party in annual stipends since she became leader in 2011.

She defended the practice in the legislature, saying that leading the party is a second job that merits the extra pay. While she had disclosed each year that she received money from the party, the amount had not previously been made public.

''The issue for us is to make sure we always separate our public duties from any sources of funding for political parties, and I think that's the most important thing for all of us to remember,'' Clark has reportedly said in defense of the stipend. ''I always keep that utmost in my mind when we're making decisions.''

Eby has complained to conflict of interest commissioner Paul Fraser about the payments to Clark, noting the party's money comes from donors, some of whom pay to attend private events with the Premier.

"The Premier's share of these donations may as well be passed directly to the Premier by the attendees of her parties in an envelope at the beginning of the evening," he wrote. "This conduct is outrageous, incredibly problematic, and directly contrary to the public interest."

Elections BC's database of political contributions shows many people and companies involved in the real estate industry gave the BC Liberals donations in the tens of thousands of dollars in 2015, the most recent year for which figures are available.

Names appearing near the top of the list, each having given at least $50,000 during the year, include the Aquilini family, Bosa Properties Inc., Concord Pacific, Developments Corp. Inc., Shape Properties, and developers Rick Ilich and Peter Redekop.

The fundraising chair for the Liberals is condo marketer Rennie, whom The Tyee recently reported gave the party $73,500 in 2015.

"Bob Rennie's a great example," Eby said. "Here's a guy who is one of the most famous condominium sales agents in North America who is running the fundraising for the Premier who refuses to put a tax on speculative investors driving up the prices of condos in Metro Vancouver."

People can't help but ask questions about Rennie's involvement in the party and how it might affect Clark's policy choices, said Eby. "Why is she refusing to act? Is it because the chair of her fundraising committee is a condo salesman? That is a legitimate question in my mind and one we should all be asking."

Rennie was unavailable for an interview. When The Tyee called his office, we were asked to email the interview request to his assistant. That email received no response.

Rennie last year called for a speculation tax on ''house flippers'' who profit from buying and then quickly reselling homes. However, he slammed the idea of a housing sales tax on foreign investors.

Rennie's Vancouver-based firm sells existing units and pre-sells units in developments under construction. The website for Rennie's firm claims: ''We can get your home in front of more potential purchasers than any other brokerage'' and to have pre-sold, last year, over $1 billion worth of units in 21 real estate projects.

Despite Vancouver being one of the most expensive real estate markets in the world, government officials have ruled out doing anything that would reduce prices.

A year ago, as the #Don'tHave1Million campaign highlighted the negative effects of high house prices in the Lower Mainland, Finance Minister Mike de Jong said, "You've got to be careful about intervening, about having the state intervene to try and regulate pricing or depress pricing."

He and Clark have both said taking action to reduce prices would erode the equity families and other owners have in their homes and that they don't want to do that.

In February, when de Jong presented the provincial budget, the main policy aimed to increase densification by exempting the sale of any newly built home selling for less than $750,000 from the property transfer tax. The measure would save a buyer a maximum of $13,000.

Eby said that while the new exemption doubtless suits Rennie and others in the real estate business just fine, it is unlikely to have much effect on prices. When small condos sell for half a million dollars to international buyers and the price is disconnected from local wages, it does nothing for affordability, he said.

It's hard to convince the neighbours of new developments that they should accept higher density when it seems unlikely to make property more affordable, he said. "I don't know how you answer that criticism."

Meanwhile, the government has so far failed to take steps to address speculation in the real estate market and discourage owners from leaving properties vacant, he said.

As long as BC Liberal Party donors seem to be setting the agenda on real estate and other policies, it's a problem, Eby said. "This is the problem with big money in politics," he said. "It distorts policy priorities of government."

The public often feels that donors have undue influence over governments, and in the case of the one led by the BC Liberals that feeling seems to be well justified, he said.

The NDP, which received just over $3 million in donations over the same year, wants a ban on corporate and union donations to political parties. Most other Canadian provinces and the federal government already have limits on donations.