Any resurrection of the proposed Northern Gateway pipeline across British Columbia could cause significant political damage to the Liberal government, warn political analysts in the province. 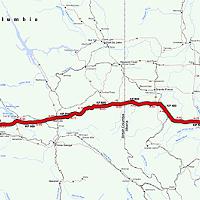 The project was thought to be dead -- finished off by a Liberal campaign promise to restore a long-standing moratorium on oil tanker traffic off B.C.'s north coast.

But recent comments by federal Transport Minister Marc Garneau have opponents gearing up to fight the controversial pipeline proposal again.

Speaking to Bloomberg News, Garneau was quoted Monday as saying that the government still hasn't "worked out" what a moratorium on tankers actually means. The article also quoted Garneau as saying it is "premature" to say the Northern Gateway is dead.

But considering the strong opposition to the pipeline in British Columbia, political scientist Wolf Depner said Prime Minister Justin Trudeau would be foolish to revive the project.

"If the Trudeau government were to resurrect Northern Gateway in some way or another they'd be making a big mistake," Depner said. "They would jeopardize the support they earned in British Columbia during the last election."

The Liberals broke out of an historic pattern of getting a few wins in urban areas to gain a record 17 seats in the province last October, after holding just two in the last Parliament.

Depner said much of that gain could be attributed to British Columbians' political habit of riding populist waves based on hot issues.

And pipelines were one of those issues in 2015, as the province saw a 10 per cent increase in voter turnout in the election that tossed the pro-oil Conservatives from power.

And when Trudeau issued mandate letters to his new ministers last November, he earned big headlines and praise from environmentalists for including a moratorium on tankers in his instructions to Garneau.

Now, Depner warns, any perception that the Liberals are backing off that commitment could rally opposition against the party that British Columbians helped elect just last autumn.

Nonetheless, he wouldn't be surprised to see such a reversal.

"The Liberals in the past have campaigned from the left and governed from the right," Depner said. "In that sense it wouldn't be unusual for the Liberal Party of Canada to distance themselves from a promise they made during the election and then go and do the exact opposite."

Trudeau appeared to be trying to calm those fears yesterday when he told reporters after meeting with his cabinet in Alberta that, "the Great Bear rainforest is no place for a . . . crude pipeline."

But the prime minister kept the door open to future green lights for pipelines in general, noting that "we continue to be very aware that one of the fundamental responsibilities of any government is to get our resources to market."

Whether Garneau's remark was a slip or a trial balloon remains to be seen. But at least one observer saw a tactical move in the minister's statement.

Kai Nagata of the Dogwood Initiative, a B.C. organization opposed to pipelines, suggested that the Liberals might be floating the idea of a revived Northern Gateway to reduce the political sting when it approves another pipeline project.

Kinder Morgan's proposed Trans Mountain pipeline through the southern Rockies from Alberta to Metro Vancouver, and the Energy East pipeline to New Brunswick, both have a better chance of becoming a reality than Calgary-based Enbridge Inc.'s Northern Gateway, Nagata said.

But killing off a pipeline many see as already dead wouldn't provide much cover for the approval of one or two other projects, he reasoned. With that in mind, Ottawa may be pumping some new life into Enbridge's project simply for the purpose of adding to their credibility when it's killed again for good.

"I think they are trying to rehabilitate it somewhat so that when they finally announce its demise it seems like an acceptable trade-off for building Kinder Morgan or Energy East," Nagata said.

He warned that if the Liberals do push the northern pipeline again, they stand to lose credibility with younger Canadians who are more opposed to such projects.

And despite his optimism that the Northern Gateway won't ever be built, Nagata said opponents are ready to pick up the fight once again if there is a serious attempt to revive it.

"We've spent 10 years in the dojo practicing for this scenario under the Conservative government," the Vancouver-based activist and organizer said, "and all of the same tools are still available to people who want to organize democratically."

The Tyee asked Marc Garneau's office on Tuesday to clarify the government's stance on the tanker moratorium and Gateway's future, but his communications staff did not reply to two inquiries.