Metro Vancouver's 800,000 daily bus riders could be facing a tougher commute as early as May 1 if drivers and mechanics give their union a strike mandate next week. 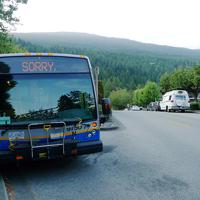 Please Advise! Where Can I Aim My In-transit-ive Rage?

"It's not our preference to go to a strike vote, or to make that threat," said Woods, president of Unifor Local 111, which represents bus drivers. "We want to negotiate a fair collective agreement."

Coast Mountain is TransLink's largest contractor and operates almost all the region's buses and SeaBus. Another Unifor local, representing Coast Mountain mechanics and SeaBus operators, is holding a strike vote on April 28.

A strike vote would send the message "employees are fed up," Woods said. "They've had enough of harsh working conditions or an attack on their benefits."

But a positive vote doesn't necessarily mean employees would strike, he said. "We're hopeful this muscles some changes."

Negotiations on new contracts for Coast Mountain's 4,700 employees represented by Unifor appeared to be going smoothly until April 6.

"We did see success with the employer and agreed to a lot of new terms," recalls Woods, "which is good."

Coast Mountain offered a similar view of the first two months of talks. "The company and Unifor locals 111 and 2200 have been working hard to renew our collective agreement," it said in an emailed statement.

But this month the company called on the union to abandon some of its proposals for improved benefits if it wanted to make gains elsewhere in the contract.

"Our members and our bargaining committee have been very clear that we will not accept a concession-filled agreement," Woods said.

'Stealing from Peter to pay Paul'

Woods said that he wouldn't share details about the offer because negotiations are continuing. But the company's proposal did not increase salaries to the levels paid by other transit operators, he said.

"The proposal the company gave us, in terms of wages, is less than other transit systems in B.C. as well as rest of Canada," he alleged.

The company wanted the union to agree to reduce benefits in return for wages comparable with other transit operators.

"They've been stealing from Peter to pay Paul," he said. "That's also what they're doing with our current round of bargaining."

TransLink has been under pressure to cut costs. Last year, Metro Vancouver residents voted overwhelmingly against increasing provincial funding to the agency, which is responsible for public transit and the road network in the Lower Mainland.