The British Columbia government has chosen to use misleading accounting at BC Hydro to fudge the province's finances ahead of the 2017 election, charges NDP energy critic Adrian Dix. 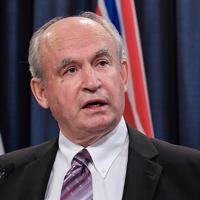 In particular, he said, the government is using "rate smoothing" or "rate stabilization" accounts to move up about $1 billion in revenue that the Crown utility won't actually receive from ratepayers until after 2021 so that it is included as income for earlier years.

The accounting trick lets the government continue to take money out of the utility to help balance its own books, Dix said.

"We're borrowing against nothing here," he said. "This is a pure attempt to mislead people about the state of the province's finances."

A table from a March 30 BC Hydro presentation shows the practice peaks in 2017, which happens to be the same year as the next provincial election.

That year, BC Hydro will draw down $250 million from a rate-smoothing account, money that it doesn't plan to finish repaying until 2024.

For context, the provincial government has budgeted an overall surplus of $287 million in 2017-2018, which in part depends on receiving $706 million from BC Hydro.

The rate-smoothing money is therefore more than one-third of the amount the government plans to take from the utility in the election year.

The cabinet chose to use the accounting move instead of reducing the amount of money the provincial government takes from BC Hydro, Dix said, citing documents from 2013 that were released in response to a freedom of information request.

Dix raised the issue last week during budget debate for the Ministry of Energy and Mines.

The minister responsible, Bill Bennett, said during the debate that using rate-smoothing accounts is possible because the government and BC Hydro have a 10-year plan for rate increases.

He compared the use of the accounts, which he said cabinet approved, to amortization where income or an expense is accounted for over several years.

"We simply avoid the rate shock of huge rate increases in one year or two years and spread them out over a few years of the 10-year rates plan, which I think is the responsible thing to do," Bennett said. "Certainly, I think, if you put it to the public and the business community, they would support the idea."

While BC Hydro is claiming revenue from future years now; as early as 2011 former auditor general John Doyle raised concerns that the utility was using deferral accounts so that expenses would register in later years.

A ministry spokesperson said BC Hydro has used such regulatory accounts since the early 1990s and most other regulated Canadian utilities use them.

"These accounts keep rates stable and fair by amortizing large costs over periods of time and lessen the impact of large, one-time expenditures on rates," the spokesperson said in an email.

By 2025, the balance in the regulatory accounts is forecast to drop to $3.5 billion from the current $5.4 billion, the spokesperson said.

Dix said that while other utilities in Canada do use deferral accounts, the use by BC Hydro is far more extensive.

BC Hydro's deferral accounts are about 12 times larger than Hydro Manitoba and more than 20 times those at Hydro Qu&eacutebec.

In B.C., the accounts are being used to make the provincial accounts look better today than they otherwise would, but they can't be used indefinitely, Dix said.

"Eventually, someone is left holding the bag," he said. "There's no question who that is. It's ratepayers."