New Democrats have said goodbye to leader Tom Mulcair, choosing to seek new leadership for the party in a decisive vote at this weekend's convention in Edmonton. Mulcair will continue as leader until a new one is chosen. 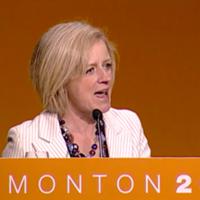 "Let's work together to choose the best person to take our project forward," Mulcair said in an address to the crowd after the votes were counted.

Delegates voted 52 per cent in favour of a holding a leadership race. They also voted to extend the timeline for the race from 12 months to 24, giving a new party executive time to plan the process.

In his final speech, Mulcair indicated he would stay on "for the next year, year and a bit."

"There is a lot of hope and optimism," he said after the vote. "As we said at the outset and it is still the case now… the only thing that is important is that we leave here united."

Mulcair addressed the crowd with new party president Marit Stiles, saying that it's clear the disappointment of the 2015 federal campaign will not be left behind without a change at the helm.

The NDP convention offered a chance for much reflection on the disastrous 2015 campaign and talk of the need for renewal. Still, the low vote for Mulcair came as a shock to some.

"I knew Tom had a challenge ahead of him, but I did not think that we would get below 60 per cent for him," said Allyson Marsh, a delegate from Halifax.

But today's vote showed that for many party members, renewal has to come with a new leader.

"Tom had a unique opportunity for the federal New Democrats, and we absolutely derailed," said Jason Rockwell, a delegate from Alberta.

Prior to the vote on Mulcair's leadership, a number of New Democrats told the Tyee they wanted to see an admission of responsibility for what went wrong in the federal campaign.

"I need to see a recognition that it is time for generational and party renewal," said Stefan Avlijas, outgoing secretary and policy director for the federal youth council, before the vote. "And we need an apology."

Mulcair's pre-vote speech reiterated his commitment to the progressive values of the New Democrats and included a one-line apology. "We made mistakes, and for that I take responsibility," he said.

In that speech, Mulcair also spoke about the need to increase corporate taxes, stand against trade deals that give away jobs, stand up for indigenous issues and work to end violence against women. Several points received standing ovations and rounds of applause.

But for many delegates, it was not enough.

"He could have come here and changed my mind, but I have not seen him engaging with members," said Mimi Williams, the Alberta co-chair for Mulcair's leadership campaign in 2012. "He has a bad credibility problem. I don't believe we can reclaim that ground with this leader."

A loosely coordinated campaign emerged during convention that encouraged members to vote to "renew the party for 2019" and vote yes for a leadership review.

"Ultimately I'm expecting he'll come out with this big progressive vision," said Julia Maksymetz, former co-president of NDP Concordia who was critical of Mulcair's leadership early on. "It's hard to believe that it's really what he stands for."

Still, the ousting of Mulcair did not stop New Democrats from taking to social media to thank the leader for his service.

"Tom deserves the gratitude of every progressive Canadian. For without Tom's powerful performance as leader of the opposition, Harper would still be prime minister," said Michael Byers, the UBC professor of international law who helped manage Mulcair's campaign to become NDP leader in 2012.

Delegates spent much of convention discussing how the federal campaign was disconnected from the grassroots, and how many regional issues had not been adequately acknowledged.

Some divisions in the NDP came into sharp focus as well, with much of the convention debate centred around the Leap Manifesto, a sweeping climate change action plan.

In addition, many young New Democrats felt unheard and unsupported in their campaign efforts.

At a forum on the campaign review Friday night, young members stood to call out the fact that "youth" appeared only once in the review document itself, arguing that many of their concerns had not been recognized.

Maksymetz had issued a joint open letter with NDP McGill calling for a leadership review in March.

"Renewal means looking at the entire structure from the ground up and to let the membership lead, not just in the platform process but the policy process," Avlijas told The Tyee.

For many delegates, new leadership is an opportunity to recommit to New Democrat values and create some energy in the party.

"This is an excellent opportunity to look forward to the future, to see what 2019 can really look like, evaluate where the Liberals shortcomings are and where we can provide genuine leadership," Maksymetz said.