Undocumented immigrants living in Vancouver are one step closer to formal assurance that they can use municipal services without fear of deportation as a result. 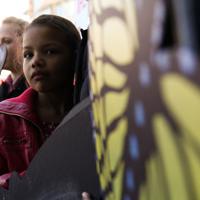 The Mayor's Working Group on Immigration is expected to table its recommendations for what it's calling an "Access Without Fear" policy to city councillors next Wednesday.

Activists have clamoured for such a policy since the 2013 in-custody suicide of undocumented Mexican worker Lucia Vega Jimenez, after she was arrested in Vancouver for not paying her SkyTrain fare and handed over to immigration authorities.

Although Canadian cities have limited authority -- transit police, hospitals and schools fall under provincial jurisdiction -- some immigrants say they worry that calling 911 for help, dealing with bylaw officers, or staying at a shelter could lead to their arrest and deportation.

The working group's report comes two years after The Tyee first revealed Vancouver's interest in a "sanctuary city" policy similar to those enacted in Toronto, Hamilton, and other U.S. cities.

The Vancouver proposal, however, avoids the sanctuary city moniker, using "Access Without Fear" instead.

"We're not providing sanctuary," explained Councillor Geoff Meggs, who co-chairs the working group. "People hear that term and think it's like sanctuary offered by a religious community if someone's fleeing extradition. That's not what this does -- this is a policy guaranteeing access to services."

If passed, the policy would declare that residency or citizenship status cannot impede a person's access to municipally run or funded services, such as shelters, permitting offices, utilities, bylaw enforcement, licensing, inspections and the fire department, according to the report.

The proposed policy also states that city workers won't share information about a person's citizenship status with other levels of government "unless required by law," for instance a warrant. And it includes training for city workers on how to interact with undocumented people, and evaluation measures to review how the policy has worked.

Meggs emphasized that the city already does not collect citizenship status information in delivering services, and that Access Without Fear "won't change anything in a fundamental way."

It's more of a formal commitment by the city, he said. "With so much anxiety and concern about newcomers, and a huge interest in the community to welcome and integrate them, it's very important we make an inclusive, welcoming statement."

'This is what we can achieve for now'

One of the group's longest-serving members, immigration lawyer Zool Suleman, described the proposed policy as "circumscribed but achievable."

Initially appointed as the group's chair under former COPE mayor Larry Campbell, Suleman has seen discussions about such immigration issues unfold over a decade.

He said the group's biggest stumbling block was how to make a meaningful impact on the lives of undocumented migrants with the very limited jurisdiction that Canadian cities are afforded by provinces.

Suleman agreed with the decision to avoid the term "sanctuary," since wrongly implying protection from immigration authorities could inadvertently "put vulnerable people in a very bad situation … exposing undocumented people to policing authorities and [Canada Border Services Agency]" because of a false sense of safety, he said.

The proposed policy would not apply to non-municipal services, such as schools and health authorities, which have all been subject to scrutiny over access by immigrants without status, as illustrated by a 2014 Tyee series that investigated the experiences of undocumented people in the region.

But when it comes to the police, library, and parks and recreation boards -- which operate independently of city council -- the policy would "encourage the three civic agencies and their boards to adopt a policy which supports the spirit and objectives of this policy," the report states.

Suleman would soon like to see formal policies for B.C.'s policing agencies that ensure people without legal status can come forward as victims or witnesses to crimes without worrying they could be reported to immigration authorities.

Policing is a significant point of contact for undocumented migrants. During the working group's deliberations, the Vancouver Police Department sent a liaison to committee meetings, Insp. Mario Giardini.

The Tyee previously reported that Giardini discussed the issue with his counterparts in Los Angeles, where police have a policy of not cooperating with immigration authorities without a judge's order.

Meggs said he hopes Vancouver police will consider an "access without fear" declaration for its operations. The mayor, who chairs the department's board, could put such a motion forward.

Another local force, Transit Police, ended its agreement to refer undocumented fare evaders to Canada Border Services Agency after a concerted campaign by activists in February 2015.

Months earlier, the agency had told The Tyee there was "no actual policy in place or anything like that."

Health authorities are the latest agencies to come under pressure, with advocates concerned about a series of deportations of hospital patients, reported The Georgia Straight.

"We're optimistic the police board, park board and library board will review this policy and do something similar themselves," Meggs said.

With so many areas outside city control, the "Access Without Fear" policy is far from perfect, Suleman cautioned, and certainly will not satisfy all activists completely.

"The idealist in me wants more, but the lawyer in me understands that this is what we can achieve for now," he said. "There's a lot of work to do in the future."