Three years after an eruption of 10,000 barrels of melted bitumen contaminated the boreal forest and groundwater near Cold Lake, Alberta, the provincial energy regulator has now officially blamed hydraulic fracturing, or the pressurized injection of steam into the ground for fracturing nearby rock. 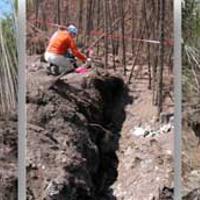 The bitumen blowout occurred sometime between May and June 2013 at Canadian Natural Resources Ltd.'s Cold Lake project, an operation that uses steam injection to melt bitumen and bring it to the surface.

In this case, the pressure from the steam cracked rock between different formations, allowing melted bitumen to find natural fractures and flow to the surface at five different locations, including under a lake.

In some places, the bitumen erupted through fissures in the ground as long as 159 metres deep.

The event, not the first of its kind as an earlier Tyee investigation revealed, killed wildlife and seeped nearly 20 barrels of bitumen a day into muskeg over a five-month period.

In a lengthy report, the Alberta Energy Regulator concluded what experts had suggested all along -- that all five bitumen seeping events "were caused by excessive steam volumes, along with an open conduit (wellbore or natural fracture or fault) or hydraulically induced vertical fractures."

According to the regulator, an independent third party expert panel that also reviewed the bitumen disaster found that the company, a major bitumen producer, had failed to properly account for geological faults and fractures in the region it was steaming.

That panel submitted "that CNRL's approach had insufficiently addressed the impact of geological variability" and how natural fractures would respond to increases in steam pressures.

In particular, the company did not properly address a new geohazard in the tarsands: the erosion of salt formations underneath bitumen deposits by the movement of groundwater.

The industry-funded regulator concluded that "CNRL did not contravene any rules in their use of their specific steaming strategy," but has since implemented regulatory requirements "designed to prevent a further incident and permanently reduce steaming volumes."

The incident, which cost Canadian Natural Resources Ltd. nearly $50 million to clean up, highlights the fragility of operations that fracture bitumen formations with high-pressure steam.

These energy-intensive projects, which often use more than three barrels of steam to produce one barrel of bitumen, now produce the majority of Canada's bitumen for export. At current oil prices, such inefficient operations are losing money.

Approximately 80 per cent of Alberta's bitumen deposits lie deeper than 75 metres and cannot be mined. The majority of bitumen extraction now comes from steaming operations that use gravity or waves of steam to melt a resource as hard as a hockey puck.

As a consequence, the deep deposits, all capped by rock, are currently being heated to as high as 300 C with steam.

During the steaming process, the overlaying caprock acts as a primary but not always impermeable seal that keeps steamed bitumen from seeping into aquifers, industry wellbores and other geological formations, as well as the forest floor and lakes.

For years, geoscientists as well as annual industry progress reports to the Alberta Energy Regulator consistently showed that the technologies used to steam deep deposits have created the same sort of problems now plaguing the hydraulic fracturing of unconventional oil and gas resources across North America.

Both technologies inject highly pressurized fluids (gas, water, steam or hydrocarbons) into formations, where the resulting pressure can crack or fracture overlying rock and well casings in unpredictable ways. These fractures can bring fluids or gases to the surface, contaminate groundwater or connect with other existing wells.

Across North America, hydraulic fracturing has triggered earthquakes, pushed gases to the surface, connected to natural faults and fractures, "communicated" with other wells, damaged nearby wellbores and contaminated groundwater.

The ongoing problem for industry is that it can't control where the fractures will go or what natural faults they might connect with.

In Canada's heavy oil production, the injection of steam has amassed a long case history of problems, including fracturing into well sites and other formations, steam leaks and blowouts. Fracking bitumen with steam has also mobilized arsenic and fouled groundwater.

The large Canadian Natural Resources Ltd. bitumen spill occurred exactly at the same place where another major leak occurred in 2009. The regulator did not report on that event until years later.

Injection pressures and steam volumes used by CNRL "either activated existing fracturing and faulting" of caprock or "altered the stress state enough to induce fracturing to enable releases of bitumen emulsion into the Grand Rapids Formation."

The bitumen then migrated up through natural fractures, faults, or vertical hydraulically induced fractures to the surface.

Cyclic steam injection, which pumps steam into a single well for weeks at a time allowing the steam to soak and build up pressure underground, has been plagued with technical problems for years.

In 2002, petroleum geologist Maurice Dusseault reported that steam injection due to high pressures caused "hydraulic fracturing out of zone, perhaps intersection with 'thief zones' and the opening of fracture pathways to water or the surface."

To deal with these major geohazards and the threat to caprock, the Energy Resources Conservation Board (now the Alberta Energy Regulator) created a special Oilsands Caprock Integrity Project seven years ago.

But OCRIP has yet to publicly release a promised analysis of "human-induced geological hazards" in the region, as well as an incident review database of steam operations that have broken the caprock. The project's website appears to no longer exist.

A 2011 paper written by employees of Schlumberger, an oil servicing multinational and fracking expert, warned that continuous steam injection can deform a bitumen formation so badly that it can "reduce rock strength, induce new fractures or re-activate existing fractures posing contained risk of containment of breach of caprock."

In turn, the fracturing of caprock "can provide pathways for bitumen and steam to flow to aquifers or to the surface causing significant risk to safety and the environment," warned the paper.