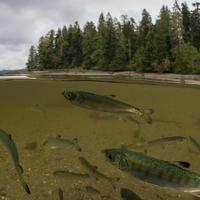 "On three incredibly important levels, this is a true litmus test for the government," said the NDP's environment critic, Skeena-Bulkley Valley MP Nathan Cullen, from Ottawa on Wednesday.

"I think it's time to find out which Liberal party we're dealing with -- the one who campaigned with some important promises, or the one that's governing and breaking them," Cullen said.

On Wednesday, a letter signed by 130 Canadian and international scientists urged the Trudeau government to reject a recent Canadian Environmental Assessment Agency (CEAA) report that concluded the Petronas-backed Pacific NorthWest LNG project could be built safely for the environment.

The scientists jointly called the report "flawed" and showed "inadequate consideration" of the project's cumulative effects, particularly on salmon.

"The letter was not directed at us, so we’re not going to comment," said Pacific NorthWest LNG spokesperson Spencer Sproule.

Environment and Climate Change Minister Catherine McKenna is currently reviewing the CEAA report and is expected to rule in two weeks if the LNG facility can go forward.

If built, the CEAA states the LNG terminal would produce 5.2 million tonnes of carbon dioxide equivalent per year, making it the largest greenhouse gas facility in B.C.

When upstream emissions -- from the natural gas frack sites in northeast B.C. -- are included, the regulator estimates emissions could rise another maximum 6.5 to 8.7 million tonnes of carbon dioxide equivalent per year.

Greenhouse gas emissions are of pointed national interest at the moment. Today marks the 90-day point from the end of the Paris COP21 summit -- the date Trudeau promised to usher in a new Canadian climate plan and greenhouse gas reduction target.

"This is Trudeau's watershed moment," said Shannon McPhail, director of the Skeena Watershed Conservation Coalition in Hazelton, B.C. "This is where we will see if McKenna and Trudeau will side with climate action or climate disaster."

Last week in Vancouver, the prime minister did not reach immediate agreement with all 13 premiers to immediately implement a national carbon price -- a key piece of Canada's climate plan. They pledged instead to study it further, and meet again in the fall.

As for Canada's national climate target, Trudeau confirmed, it would remain the same as the previous Harper government's -- to curb emissions by 30 per cent from 2005 levels by 2030.

The Liberals also promised in their election platform to increase the protection of Canada's marine and coastal areas from 1.3 to 10 per cent by 2020. McPhail said protecting the Lelu Island aquatic habitat where the LNG terminal is proposed is a "great place to start."

The Pacific NorthWest LNG would require a trestle and suspension bridge to pump natural gas to LNG tankers. The structure crosses the edge of Flora and Agnew Banks --an aquatic area teeming with eelgrass grass considered crucial for the rearing of salmon fry.

"The location is horrible in terms of risks to salmon and other fish," said Simon Fraser University aquatic biologist Jonathan Moore, who also led the effort to rally 130 scientists against the project.

Moore said he recently conducted research in the water around the proposed LNG plant -- catching, counting and releasing more than 200,000 fish -- and concluded the facility could "threaten the whole" Skeena salmon run, the second largest in Canada.

"You have a massive project such as this -- and whether it's the removal of vegetation on Lelu Island, the bridge trestle* structure, the dredging for the pipe, or the 690,000 cubic metres of sediment and rock that need to be dredged and blasted [to build it] -- cumulatively, there's all these different pathways of risk," he says.

"It's like a surgeon telling you it's a minor procedure, when in reality, it's open heart surgery," the scientist added, whose SFU study was a collaborative research effort with the Skeena Fisheries Commission and the Lax Kw'alaams Fisheries Program.

First Nations engagement is another major promise by Trudeau that could be affected by the LNG project, says UBCIC Grand Chief Stewart Phillip, who travelled this week to Ottawa to urge federal officials to nix it.

Many Canadian and U.S. Tsimshian bands in the region -- including the Lax Kw'alaams who voted against a $1-billion offer to support Pacific NorthWest LNG last year -- oppose it, he said.

But not all indigenous leaders oppose the project. Gitxaala Nation hereditary and elected chief Clifford White has said his band has completed two independent scientific studies on the project's environmental impacts.

"As it stands, we find that there's nothing paramount that's standing in the way in terms of moving forward," Chief White recently told a Prince Rupert business crowd.

Environment Minister McKenna was not available to comment on the scientists' letter, as she was en route to Washington for a state dinner with the U.S. President, alongside Trudeau. The office of Natural Resources Minister Jim Carr also declined to comment.

The Prince Rupert and District Chamber of Commerce said the science is sound and is satisfied the project will not harm the environment.

"From our perspective, this has been well researched, and well analyzed. The scientific review was rigorous, and was done four times," said Simone Clark, the chamber's manager of communications.

The CEAA also said Wednesday: "The Government of Canada is committed to conducting high-quality, thorough and science-based environmental assessments that are fair, transparent and that take into account the views of Canadians and Indigenous Peoples."

*A previous version of this story misspelled the word trestle. Updated Thursday, March 10 at 11:18 a.m.