The City of Seattle has been slammed with a lawsuit over its groundbreaking bylaw allowing drivers-on-demand -- including Uber, Lyft and taxi operators -- to unionize. 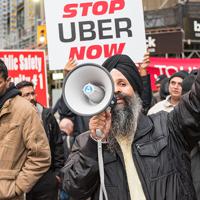 How Do Workers Organize When Their Boss Is an App?

"The ordinance unlawfully authorizes for-hire drivers to engage in this per se illegal concerted action by forming a cartel... and engaging in horizontal fixing of prices and contractual terms," the Chamber said in a statement, adding Seattle's law "would negatively impact the sharing economy and jeopardize the flexible work schedules and earnings opportunities that economy provides to millions of people nationwide."

The U.S. legal challenge comes as Canadian unions debate how to respond to the fast-growing "gig economy," which has sparked conflicts between taxi and Uber drivers, and between the company and several Canadian cities.

Asked by phone how Seattle will respond to the Chamber's accusations the law would create cartels and jeopardize jobs, City Coun. Kshama Sawant chuckled at what she called "outlandish claims."

"My response to these threats by the U.S. Chamber of Commerce is that we fully expected legal challenges, so this is not a surprise to us," she told The Tyee. "But we will be able to prevail. People are no longer accepting injustice as business-as-usual."

The Socialist Alternative politician, who has championed the ordinance as well as the city's landmark $15-an-hour minimum wage law, said Seattle is prepared to fight for the worker protections in the courts. (Democratic councillor Mike O'Brien, who sponsored the ordinance, told Reuters the city has "millions of dollars set aside" to defend the bylaw).

Sawant said that concerns over the employment practices of "transportation network companies" -- which allow customers to use their smartphones to hail drivers classified as independent operators, not employees -- led to widespread push for the "historic and unprecedented" legislation from the labour movement, taxi drivers and on-demand drivers alike.

"Corporations like Uber are going to argue this is a different kind of business model and unionizing doesn't work because they're not employees, that this is the sharing economy," Sawant said. "This may be app-based on mobile phones, but as far as the exploitation of the workers is concerned there's nothing innovative about the sharing economy."

But for businesses in the sharing economy, Seattle's attempt to change labour relations at the municipal level "reflects a broadside attack on the fundamental premises of independent contractor arrangements, as well as the nascent on-demand economy that relies on it," the U.S. Chamber of Commerce stated.

Likewise, Uber said in a statement that the council's ordinance "raises serious questions not only about whether the city has run afoul of federal laws, but also about the impact on drivers who rely on ride-sharing to earn flexible income."

In the U.S. as in Canada, independent operators are a separate category of worker from employees, and consequently have fewer labour rights, including collective bargaining and forming unions. In both countries, such independent contractors are not guaranteed a minimum wage; an experiment by Journal de Montreal reporters found that Uber drivers earn as little as $4.60 an hour despite the company promoting earnings four times higher.

If it is upheld in court, Seattle's landmark bylaw would allow a majority of independently contracted drivers working for the same firm -- if they drive a minimum number of rides every month -- the option of joining a non-profit "driver representative organization" to bargain for their earnings and working conditions.

Because the ordinance applies to both taxi drivers and tech-based apps, it helped alleviate "initial tension" between taxi, Uber and Lyft drivers, Sawant said.

By lobbying together for collective bargaining rights, both groups "reached a point where they understand that they're not fighting against each other; in fact they're all struggling to put food on the table," she added. "[They] recognize that the real enemy's not each other, but big business and corporate politicians that serve them.

"Even if the court does not rule in favour of our legislation, and perhaps even more so in that case, we have no option but to keep building the fight."